Death was a common theme at Patti Smith‘s first of two back-to-back sold-out concerts on Thursday at the Art Gallery of Ontario in Toronto, where the exhibit Camera Solo, comprising 75 of her Polaroid photographs and personal objects, is on display until May. On the gallery wall, a quote from her reads in part: “I have a strong relationship with the dead, even a happy one.” She reiterated that sentiment at a press conference earlier in the day, speaking of the beauty she sees in everyday life, right down to our final resting place, the gravesite.

The live performances were part of the AGO’s Patti Smith programming this week, including a book signing, film screening and a separate ticketed event, An Evening of Words and Song with Patti Smith. She will also perform a concert at the Queen Elizabeth Theatre Saturday in honor of the anniversary of Mapplethorpe’s death, something she has tried to do each year since he passed away in 1989. 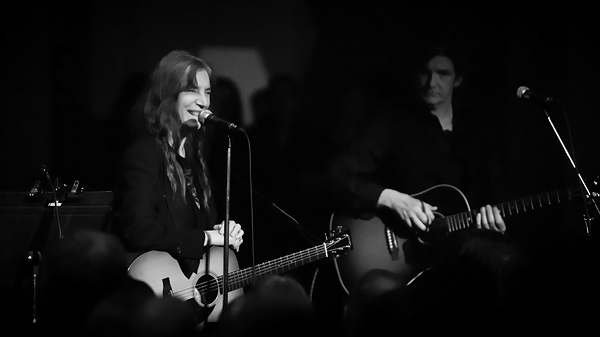 The acoustic show had an air of sophistication, no doubt due to its exquisite setting. After grabbing a cocktail in the foyer, patrons were led into a roped-off atrium with high glass ceiling and wooden, serpentine staircase. Smith took the makeshift stage promptly at 7:30 with her daughter, Jesse Paris Smith, on piano and guitarist Tony Shanahan. Holding only 400 people (tickets for the two shows sold out in minutes last month, temporarily crashing the AGO website; others waited in line in the snow as early as 6 a.m.), the respectful crowd did not jostle in front of the stage, listening intently without holding up their cell phones cameras as Smith performed such songs as the rousing “Ghost Dance.”

She followed with a reading from her 2010 memoir Just Kids about her early life with Mapplethorpe, choosing an amusing segment about how she met Ginsberg. “Are you a girl?” he asked after helping her purchase a sandwich when she was short a dime.

“I took you for a very pretty boy.”

“Does that mean I have to return the sandwich?” she replied. Smith then dedicated her next song, “My Blakean Year,” about William Blake, to Ginsberg. Next, she told a story about poet and adventurer Rimbaud, leading into the hypnotic spiritual song “Beneath the Southern Cross.” Her Mapplethorpe tributes also continued with the reading of a short memorial poem she wrote for him that segued into her song for Amy Winehouse, “This Is the Girl.” 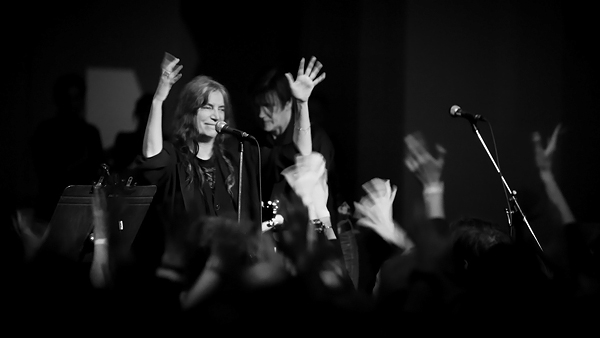 Putting dead legends aside for a moment, Smith spoke of a man who is still living and rockin’, the Canadian Neil Young and his band Crazy Horse, with whom she toured last year – “Number One in the world,” she proclaimed before launching into a cover of Young’s “It’s a Dream.”

What came after was perhaps the most moving of all her homages: she read a letter she had written to Mapplethorpe a couple of days before he died. “He didn’t live to read it, so I’ll read it to you,” she said. No words except hers could do it justice, but it concluded with the line “of all your work, you are still the most beautiful – the most beautiful work of all.”

The hour-long show concluded with the passionate “Pissing in a River” and “Because the Night,” the song Bruce Springsteen c0-wrote with Smith, which she dedicated to her late husband. For this, the crowd broke loose a bit to sing along. There was one more reading, a piece about the end of 1969, wandering around snowy New York City with Mapplethorpe: “We felt ready for the Seventies – it’s our decade.” With that, Smith started clapping as the final song, “People Have the Power,” began.