It’s been quite a year to be a Rolling Stones fan, and with the band in the midst of their 50th anniversary tour around North America and Europe, fans in New York City gathered at the Bowery Ballroom to celebrate the band’s music at the sold out Stones Fest Wednesday night.

Though a little bit of line congestion left some fans sweltering in the muggy weather for the beginning of the show, most people were inside by the time the house band The Cabin Down Below Band – featuring Rolling Stone contributing editor Austin Scaggs on bass, former Rolling Stone staffer Alex Levy on guitar, and musician Matt Romano on drums – kicked into “Start Me Up” fronted by comedian Seth Herzog in full-on Jagger impersonation. It was the first of many light-hearted cameos in a night filled with lots of laughs, free-flowing alcohol and a loose vibe that permeated the entire crowd.

Stones Fest, like its cousins Petty Fest and Dylan Fest, grew out of a late night jam session celebrating Bob Dylan’s 60th birthday more than a decade ago, and is now celebrating this year with two sold-out shows at the Bowery in New York and another show May 30th at the Fonda Theatre in Los Angeles. This year’s iteration was a benefit show for Sweet Relief, the organization that helps support musicians in need due to health or illness problems, and a number of stars made appearances to support the show and kick out some classic jams.

The Black Keys’ Patrick Carney emerged to play drums on “Satisfaction” – which featured vocals from Har Mar Superstar, who rocked a “Who the fuck is Mick Jagger?” t-shirt – and singer Ruby Amanfu, who contributed vocals to “Love Interruption” off Jack White’s Blunderbuss album, came out for a stark rendition of “Angie.” Country singer Jason Isbell, who confessed to having attended 100 Rolling Stones shows, lent his Nashville flair to “Moonlight Mile” before plugging in to lead the band through “Can’t You Hear Me Knockin’.”

The night’s freewheeling spirit was no doubt loosened due to the event’s sponsor – “Love for Jameson; we wouldn’t have been able to give every penny to charity without their help,” said Scaggs at one point – but it also helped that none of the performers seemed to take themselves too seriously either. When performers got really into the schtick of Jagger and his over the top exuberance – as Har Mar reprised on “Under My Thumb” later in the evening – it usually led to another highlight of the evening.

Norah Jones was a frequent presence throughout the evening, lending backup vocals to a good chunk of the thirty-odd songs the band performed, and duetting with Cory Chisel on “Salt of the Earth,” which sped along to the song’s frantic bluegrass-soaked finale. She later re-emerged with Jakob Dylan to perform one of the many high points of the night, Exile on Main Street‘s “Loving Cup.” There was a virtual tie between “Tumbling Dice” and “Honky Tonk Women” as to which song got the crowd singing its loudest, while a call for “More Disco!” led to some of the more embarrassing dance moves of the evening during “Miss You.” 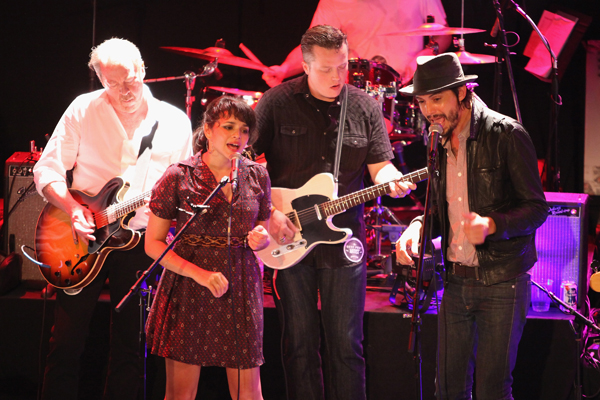 Tom Petty guitarist Mike Campbell took the stage alongside Regina Spektor for “Jumpin’ Jack Flash” before Jane’s Addiction frontman Perry Farrell came out to lead the band through a shimmering “Sympathy For the Devil” and the plaintive “Time Is On My Side.” Jones then stepped out solo for a gorgeous waltz through “Wild Horses” and stayed on stage with Isbell for the penultimate “Shine A Light,” with Boz Scaggs stepping out to lend his guitar to the song.

“Thank you to Jameson for keeping us fucked up and dignified!” yelled Butch Walker, chugging directly from a bottle on stage with Scaggs before launching into the venue-wide singalong “You Can’t Always Get What You Want” with just about every performer of the night stepping out on stage to join in. And as the crowd filed out a little after midnight, it was to the sound of Walker yelling lustily into the microphone, “We’ll see you all tomorrow night. . .”