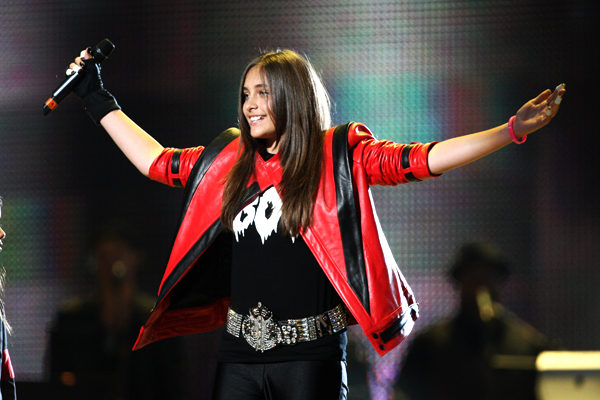 Michael Jackson‘s daughter, Paris Jackson, gave her first solo interview to The Ellen DeGeneres Show in an episode that aired today. The 13-year-old talked with DeGeneres about her new acting project and the advice her father gave her during her unusual childhood.

Jackson, who appears in the upcoming fantasy film Lundon‘s Bridge and the Three Keys, told DeGeneres she took the role because “I know my dad always wanted to heal the world, and so I think it would be great to follow in his footsteps.”

Jackson, wearing a fedora, black top and a youthful pink streak in her hair, recalled advice that her famous father once imparted. “[He said] ‘If I die tomorrow, always remember what I told you,’ and I took his advice,” she said. “I remember everything that he told me.” She also insisted that she is having a normal teenage experience ­– she is a member of her school’s volleyball and basketball teams and also learning to sing and play piano.

The budding actress said she was inspired to take part in Lundon’s Bridge after she saw her father’s film Moonwalker, but that she didn’t realize the extent of her father’s fame then. “When I was really little, I didn’t know that [he was such a big deal],” she told DeGeneres. “I knew, like, ‘Yeah, he has a few songs out,’ but I just figured everyone did that.” An excerpt from the interview can be found on the Ellen website.