“It’s good to stretch yourself and that’s what this whole album has been about — growing and trying new things,” Paramore’s Hayley Williams says of their recently released self-titled record, which the band is about support on an arena tour. She’s talking about moving past the departures of original members Josh and Zac Farro, lyrically addressing people who are stuck on the band’s former lineup and experimenting with a bevy of new sounds from pop to gospel under the guidance of producer Justin Meldal-Johnsen (Beck, Nine Inch Nails). But Williams has also been trying new things outside of Paramore this year.

The 24-year-old recently guested on Zedd’s club ringer “Stay the Night” and, now, is acting as the artist ambassador for Hard Rock’s Pinktober campaign, which raises global awareness about breast cancer. Earlier this week, Williams spoke to Rolling Stone about the recent movement of female artists speaking out against sexism, her thoughts on dance music and Paramore’s recent rider requests.

You recently tweeted Chvrches’ Lauren Mayberry’s post on online misogyny. Between her post, Grimes’ post on sexism, and Lorde’s recent comments on appearance pressure, it seems like a lot more female artists are stepping out and voicing their struggles.

I loved Lauren’s and Lorde’s posts. I think it’s really cool that there’s so many rad girls and older women in music. There’s a lot of people that have different points of view and it’s nice to see people coming together and being honest about something that matters and should be talked about. I’m so excited to see this stuff surfacing because it’s real. Even my friend Mariel [Loveland] from the band Candy Hearts posted about it and it blew my mind. When I was 16 and we started touring, I looked like a 12-year-old boy with no makeup, sports bra, one of the guys’ shirts, and I’d wear the same pair of jeans for a month straight. I never showered and was gross and guys that were probably a good 10 years older than me harrassed me.

I remember playing North Star Bar [in Philadelphia] and this guy yelled “take off your shirt!” probably 10 times. It had happened a couple of times at this point but this guy was super aggressive about it. By the fifth or sixth time, I realized that I’m the one with the microphone. I’ve got power here. I don’t have to be quiet. Sometimes there’s strength in letting your actions speak for you, but in this moment I was like, “I don’t have to take this.” He said something again, I said something back and was just as consistent as he was, and then he stopped. But, by the end, I was just like, “I don’t like you. Get out,” and made some guy I knew get him out.

Do you think the industry has been slow to encourage these conversations?
I don’t think it’s all of the industry. It’s finding that voice within us and, for whatever reason, the climate right now feels a little more empowering. It’s like Sinead [O’Connor]’s letter talking about how men are going to make money off of us and all of the choices that we make. I do believe that. It’s always been that way and it’s time to start saying something. There’s enough women that are rad and have great points of view and great things to say who can start encouraging that in one another and the people who are coming to shows; instill something else in them that is not being told to them through society and magazine covers — tell them that having a voice and going against the grain is good. 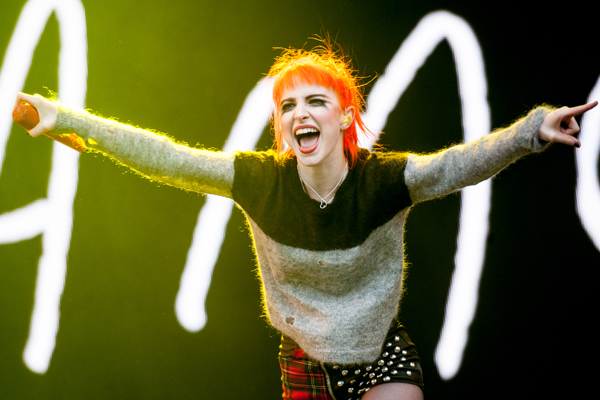 Are you on one side of the fence with Sinead vs. Miley?
I can’t say that I am. My granny always says, “There’s this person’s side and that person’s side and the grey in between.” When I first read Sinead’s letter, I actually reblogged it. It was cool to see an older woman expressing concern and, when I read it over once, I thought it seemed genuine — she’s concerned and she played the game and then decided not to play the game anymore.

I don’t think she would intentionally hurt someone but after reading it a few times, I realized that if that was me on the receiving end, I would be embarrassed because this is someone that I look up to. There are a lot of feelings and emotions and that’s the part that we don’t think about when we’re tweeting or talking about it. I would look like a total asshole if I was doing the things that Miley is [doing] and I wouldn’t feel genuine but I can’t sit here and say with 100 percent certainty that’s not who she is. At some point you let someone be who they are.

It’s crazy that we’ve had a million open letters, a thousand conversations, and everyone, at the core of it, is just judging someone. This person is finding their way in the industry and weathering the storm that is coming up in the Disney world. I think she’s figuring that out. I couldn’t do it. So I can’t sit on one side of the fence. I’m just trying not to be a judgmental jerk.

There’s been many shifts in Paramore. At this point, do you consider yourself to be the core of it?
I don’t because I’ve been playing with Jeremy [Davis] and Taylor since I was 13. Taylor wasn’t allowed to be in the band until he was 17. His mom made him finish school. But he was always writing with us. He has a song on every one of our records up until this one, where he’s written all of the music with me. Jeremy and I were in a band even before Paramore. We played funk cover songs from Seventies, Eighties.

Paramore could never be just me. To people who ask “Why is it even a band?” . . . we’ve always wanted it to be a band. And we’re friends that have the same ideas about music and how it should feel. I can’t imagine being in any other band or project. It was fun to do the Zedd song but my heart is 100 percent for Paramore.

Do you have any other features coming up?
I don’t. It’s a crazy time for me because I have the project with Zedd and I’m working with Pinktober and Hard Rock for the Breast Cancer Research Foundation and that’s an incredibly important thing for me to be a part of. I’ve never done anything this important as a woman. We’re going to be working with the foundation on the tour as well. I feel ready to do other things but Paramore is my priority.

Were you a fan of Zedd and dance music before making “Stay the Night”?
I’m a big fan of Zedd. I don’t know a whole lot about the EDM world. Jeremy, our bass player, could sit down and talk to you about all of it. I remember being younger and riding around in his Honda hatchback and he would drag race — he actually had to go to jail for a little while because he was going so fast and got chased — and says that every time he’d race he would put on a techno song or super crazy EDM music. He knows more about than I do but when I hear a song like [Zedd’s] “Clarity” on the radio, that is such an amazing song. That’s the hybrid of pop and dance that I want to hear. Zedd is such a good musician and I don’t know how many people know that. I didn’t know that before I worked with him on “Stay the Night.” He’s a crazy perfectionist.

Could you see Paramore writing dancier tracks in the future?
The three of us like different music: Jeremy likes beats and dance, Taylor is into indie and very obscure bands, and I listen to punk rock and pop music. When we started making this record, there were more electronic elements that excited us. We hadn’t done it before so it felt fresh. We’ve been in the band for 10 years now, so to do something different this far in is really cool. We had this band who we’re friends with called Dutch Uncles remix “Ain’t It Fun” and we’re talking about getting other artists to remix it too.

Speaking of opening up your sound, were you thinking about how this material would translate to arenas?
This record, we were a little bit less concerned with the live aspect. In the past, it was like, if we can’t pull it off with two guitarists, bass, and drums then it doesn’t feel real to us. So we really did open up our minds and wanted to make something that sounds good. We thought we’d figure out the rest when we got there. There were some ideas that Taylor had early on about how we’d pull things off and then we got to rehearsals and realized it was way more complicated than we thought. We’ve really stretched ourselves. Everyone’s become a better musician. We’ve become better singers.

You’ve embraced pop music a lot more recently. Do you feel any tension as a punk band on a major label, sitting between those two worlds?
Living in that tension is kind of cool, in a way. We’ve never done anything that doesn’t feel real to us. We wouldn’t just throw all of the things we’ve been through and all of the people we’ve played for out the window just to have a successful song. “Still Into You” has been nuts for us and it’s given us some of the most fun opportunities and experiences that we’ve ever had as a band. So, yes, we’re embracing the things that we like about pop but we still do it as Paramore. It’s really cool to be able to straddle the fence and see what we can get away with and what we don’t feel comfortable trying.

Next week, Paramore kick off an arena tour. What are some of your best rider requests?
The last time we changed our rider was when [guitarist] Taylor [York] and I started eating less gluten and asked for gluten-free snacks. But, when we were an exciting and more fun band, we used to put one surprise item and then request one puppy to hang out with. No one ever came through with a puppy.