“You look good!” Hayley Williams declared last night to a cheering, sold-out crowd at the Wiltern Theatre in Los Angeles, as she led Paramore through an excitable 90-minute concert after some time away from fans. “We’ve been biting our nails. We’ve been grinding our teeth every second waiting to get back to you.”

It was the fourth stop on Paramore’s American tour behind their new album, Paramore, which was recorded in Los Angeles, and it began with a heartfelt moment of warmth and intimacy. Williams stood alone with guitarist Taylor York, who strummed a ukulele, to perform the new album’s “Interlude: Moving On.”

“We got our own style, we got a way of livin’ life,” Williams sang to her swaying fans. “If they can’t get down, well, we don’t need them around.”

The song was a direct if vulnerable statement of purpose for Williams and Paramore, particularly as the new album is the first since the acrimonious departure of founding members Josh and Zac Farro. But fans hardly seemed to notice that anything had changed with the platinum-selling Franklin, Tennessee act. 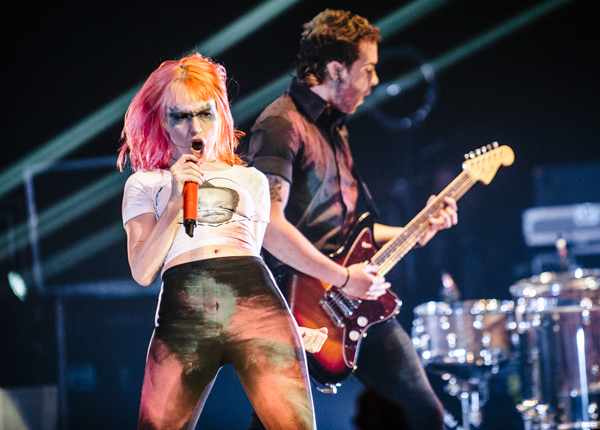 Paramore roared into full pop-punk focus with “Misery Business,” as Williams snapped her long orange hair and hopped across the stage in a performance that was both dramatic and athletic. During “For a Pessimist, I’m Pretty Optimistic,” Williams lifted the mic above her head and let the crowd sing as a chorus through the empty spaces.

With a dark stripe of makeup smeared across her eyes, Williams was dressed to move in running pants and a snug T-shirt printed with the face of Conan O’Brien (who looked surprised to be there). She dedicated “Still Into You” to the talk show comic and said of years of viewing pleasure: “Conesie has been there since the sixth grade.”

During “Now,” she fell to her knees as the band buzzed around her. But she was always the center of the night’s energy and personality, no matter how much York and bassist Jeremy Davis bounced in place. (The core Paramore quartet were joined onstage by two additional touring guitarists.)

Star power was the band’s main fuel, focused almost entirely on Williams, even when Davis managed an impressive somersault over the back of York. It was at its most pure when the band wasn’t playing at all, allowing Williams a few moments of a cappella communion here and there with her fans. 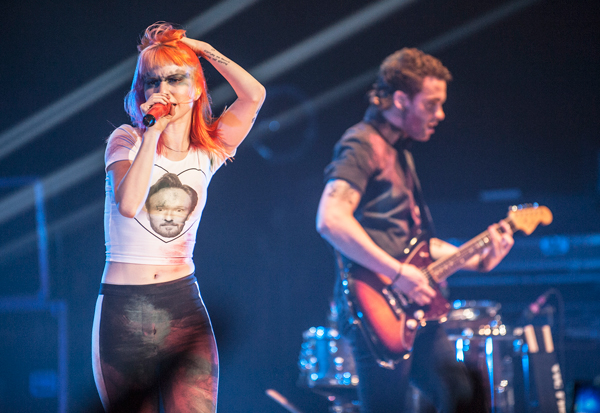 There were some endearing rough edges on the noisy “Ignorance,” colliding pop vocal hooks with slashing guitar, and a driving machine-gun beat on “Fast in My Car.”

Things slowed down for the dramatic “Decode,” and York picked up an acoustic again for the emotional “You’re the Only Exception.” Fans lifted their cell phones high above their heads or just swayed with their hands in the air, as Williams stood centerstage, leading a band and a sound much more than the sum of its simple pop-punk parts.

Set list:
“Interlude: Moving On”
“Misery Business”
“For a Pessimist, I’m Pretty Optimistic”
“Decode”
“Now”
“Renegade”
“Pressure”
“Ain’t It Fun”
“The Only Exception”
“Let the Flames Begin”
“Fast in My Car”
“Ignorance”
“Looking Up”
“Whoa”
“Anklebiters”
“That’s What You Get”
“Still Into You”
“Proof”
“Brick By Boring Brick”