If America is home to the Lone Ranger artist – Elvis, Dylan, Springsteen, Prince, and scores of others – then England is a breeding ground for the band-as-gang, like the Rolling Stones, the Clash, Oasis and the Libertines. Palma Violets, a super-hyped young quartet out of South London, repped their native land’s proud tradition Thursday night at Brooklyn’s Music Hall of Williamsburg.

“Ladies and gentlemen, tonight is not your usual night or rock show,” the band’s merch guy said, introducing their 90-minute set. “No crossed arms. Tonight is the night to fight against that.” Palma Violets delivered on his promise.

Led by two frontmen, guitarist Samuel Thomas Fryer and bassist Alexander “Chilli” Jesson, the band blasted through much of their debut album 180, which has the English press salivating over its ramshackle, pints-in-the-air sound. There are hints of all the aforementioned Brit bands – especially the Clash, Oasis and the Libertines – in the distorted guitars, hard-driven bass and drums and last-call sing-alongs on 180. At the band’s core, though, are fun, meat-and-potatoes football-hooligan anthems, custom made for good times amongst friends. Cheers to that. 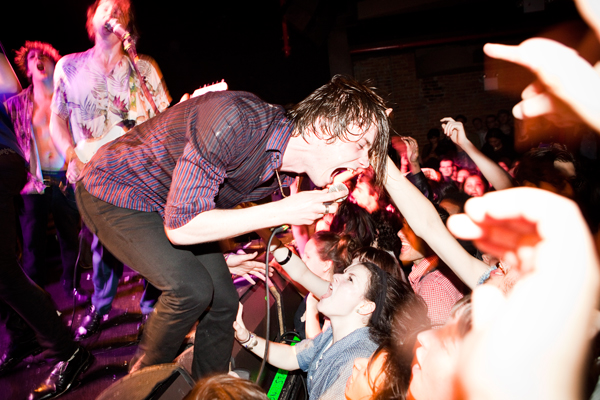 Palma Violets certainly had a piss-up onstage Thursday night. “This is the most crowded show we’ve had in the States,” awed Jesson, who sipped his beer between songs. The spotlight was on Jesson and Fryer, whose chemistry and confidence onstage was supported by drummer William Doyle and keyboardist Jeffrey Mayhew. On album gem “Step Up for the Cool Cats,” Jesson knocked over his mic stand, hopped on the bass drum and ran back to the mic to holler, “You had me dancing in the sun!” During “Chicken Dippers,” Jesson and Fryer shouted in unison, “You make me feel like I’m the only one,” before Jesson unleashed a wolf-like howl. “All the Garden Birds” delivered a slower, indie-pop vibe with sweet melodies and keys that sounded like Ray Manzarek of the Doors; then on “We Found Love” Fryer sang about finding “a lady friend” and “sticking by her until the end.” The frontmen thrashed and pogoed before going back-to-back at the mic and shouting: “La la la la la Layla!”

“Raise yours hands higher, higher, higher!” Jesson instructed, before unleashing another howl. “Even the guy with the crutches – yes, raise ’em higher! All of you!” The band then broke into one of their tightly-wound grit-pop jams “Last of the Summer Wine,” singing, “Over and over and over again” like it was a school fight-song. Jesson dropped his bass and stoked the crowd by shaking maracas at the pit. “Raise your arms! Show me! Higher!” Doyle soloed and then stood on his stool with his arms and drum sticks pointed to the ceiling, mirroring the crowd and their many raised beers. 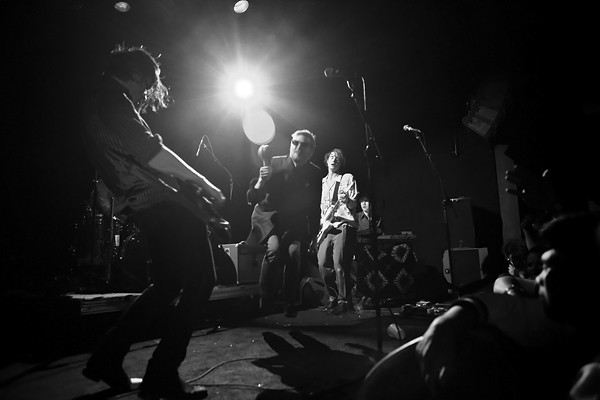 The rampant press about the band is hinged on “Best of Friends,” the infectious opening track on 180. It had the packed (but not quite sold-out) crowd in a froth as the band chugged through its catchy hook:

It was too good not to soak up the camaraderie as it poured offstage.

Later, the members of Palma Violets – who all straddle the 20-year-old mark – returned for an encore. Before starting “14,” their crew and merch guy brought out a birthday cake for Jesson. As he devoured the frosting onstage, Fryer kicked into the 180 slow-burner: “I’ve got a brand new song, it’s gonna be a Number One,” he sang. Soon a mini-swarm of people poured onto the stage from the wings and shook maracas, threw beers, hopped about, slam danced and hug-lifted each other, falling into amplifiers and wrestling. Just like best friends. 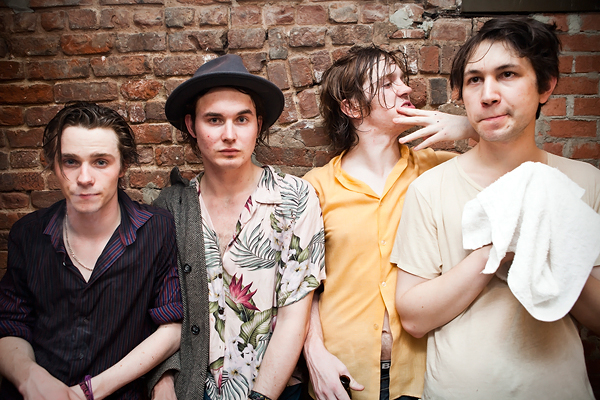