In 1943, three years after releasing “This Land is Your Land,” Woody Guthrie and his wife Marjorie moved to a modest first-floor apartment at 3520 Mermaid Avenue in Coney Island. Three of their children – Arlo, Joady and Nora – were born there, and as Marjorie taught dance classes, Woody stayed with the kids, spending long days on the beach and taking them on daily walks to his favorite restaurant, Nathan’s Famous hot dogs. The seven years Woody spent on Mermaid Avenue were the most stable, prolific period of his rambling life. In 1952, after some brief stints in other New York apartments, he was admitted to Brooklyn State Hospital, beginning a long battle with Huntington’s chorea.

The Guthrie family  – a small group including daughter Nora, two grandchildren and two great-grandchildren – plus friends Steve Earle and Billy Bragg held an intimate gathering at Coney Island on Saturday to mark his 100th birthday. “I thought, before it gets too late, we ought to do something for the books and say, ‘This is where his ashes are,'” Nora Guthrie said. “They’re there. This was Woody’s favorite place.”

The family met at the site of 3520 Mermaid Avenue, now a giant senior citizens home, the only evidence of Guthrie’s residency a small sign nailed to a post. After family hugs and photos, everyone walked down the cracked pavement of 36th street to the beach. “We used to come down here in one of those red wagons,” Nora Guthrie said. “He’d always say, ‘Hurry up!'”

“These were all little apartment houses,” said Nora, pointing to the surrounding low-income housing. “None of the projects were here. It was lower middle class – working people, taxi drivers, sanitation men, postal workers. I think we paid $27 for the apartment at the time for one bedroom.” (Nora meticulously documents her father’s 27-year New York stay in the new book My Name Is New York: Ramblin’ Around Woody Guthrie’s Town).

As waves crashed on the shore under a cloudy sky, the group formed a circle in the sand overlooking the jetty at the end of the boardwalk – Woody’s favorite spot. Nora vividly recalled the day the family spread Woody’s ashes there after his death on October 3rd, 1967. The ashes, she remembered, came in a small can which her mother opened with a can opener. “We didn’t have any religious traditions,” Nora said. “We were inventing things along the way.”

“It was a comedy of errors,” Nora recalled. “We climbed out on the rocks and it was really windy and we were slipping on the rocks. We threw the whole can in, and it bobbed along and came back on shore. It kept happening. Finally, we held the can down in the water, filled it with a little water and chucked it in. The can is probably still out there.” 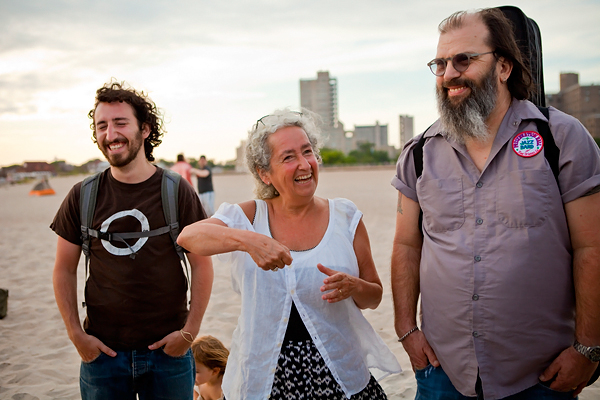 “We didn’t know what to do afterward,” Guthrie said. “We didn’t have religious traditions. Stand in silence? Prayer? Mom said, ‘I think Woody would really want us to just go to Nathan’s. So we went over to Nathan’s and sat on the ground with our backs against the wall with my father’s favorite food, a hot dog and French fries. That was the big ceremony.”

Then, Bragg sang a moving a capella take on Guthrie’s “Go Down to the Water,” bringing the family to tears. Guthrie’s tiny great-grandchildren made sand angels and drew their great-grandpa Woody’s name in the sand. Next,  everyone jumped into an SUV, heading down the road to introduce a screening of 1976’s Bound for Glory on the beach. “Woody Guthrie is 100 years old today,” Earle told the crowd before playing acoustic versions of “New York Town” and “Christmas in Washington.” “He invented our jobs.”

Speaking to Rolling Stone before the ceremony, Earle marveled at how Guthrie conquered the New York folk scene. “When he showed up in New York City, he was naturally greeted as the real thing,” Earle said. “All the other folkies in town were academics, and they thought,  ‘Well this guy is the real deal, he’s a real hillbilly.’ The actual fact is, he probably read more than all of them.”

Earle added, “He started out as a country performer, but he developed a political perspective during tough times. He was just an entertainer, but the stakes were high. The world was falling apart like it is right now.” 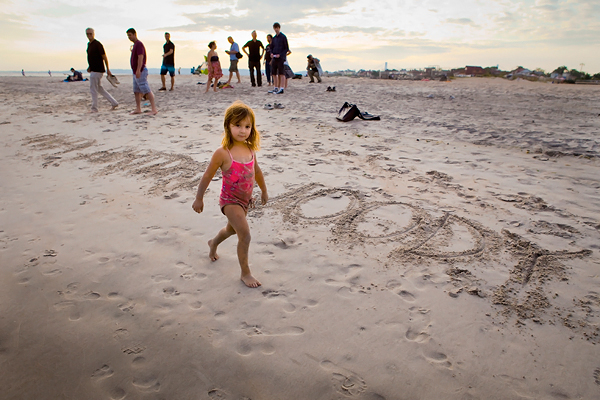