On the Charts: Van Halen Jump Ahead - Rolling Stone
×
× 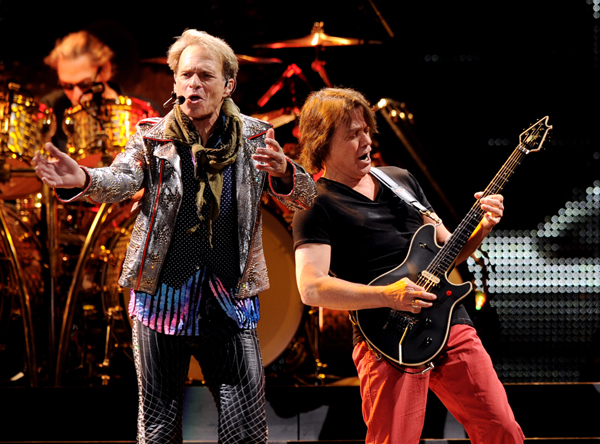 WINNER OF THE WEEK: Van Halen. This should be interesting. We’ve been noticing for the past year that prominent rock albums, from Nickelback to Coldplay to Cake, tend to leap onto the charts in their debut weeks, then quickly drop off. Van Halen’s A Different Kind of Truth, with David Lee Roth restored to his rightful frontman position, could change all that, after selling 187,000 copies and landing at Number Two on Billboard’s 200 (and Number Four on the iTunes chart, displaced by Adele, Whitney Houston and, uh, the Fray). Arguments in favor of Van Halen chart longevity: a huge push from its hitmaking label, Interscope; an ongoing tour that’s likely to sell many tickets; and the ability to hit rock-radio playlists since the music is reasonably lively, fresh and familiar to old-school programmers. Arguments against: The first single, “Tattoo,” isn’t even on the Ultimate Chart’s Top 100 after its debut on January 10th, and its YouTube video seems stuck at 3.4 million hits, not nearly enough to constitute a smash.

LOSER OF THE WEEK: Everyone at the Grammys except Whitney Houston. The only major Grammy performer to get an early sales boost via iTunes was Paul McCartney, and his new Kisses on the Bottom managed just Number Six. (It sold 74,000 copies last week overall, although Billboard’s charts only go through Sunday, so it’s hard to say whether the Grammys had any impact.) Bruce Springsteen? No impact. Foo Fighters? Deadmau5? Skrillex? Band Perry? Civil Wars? Even less. You could make an argument that Nicki Minaj helped herself with her humorously insane, love-hate-Catholic performance, but her song with David Guetta (“Turn Me On”) was at just Number Six on iTunes and her guest spot with Madonna (“Give Me All Your Luvin'”) was just Number Eight, and that was probably due to lingering Super Bowl buzz from the previous week. Adele’s 21, of course, maintained her stranglehold on Number One, but we suspect that has less to do with her Grammy ubiquity than just her general chart dominance.

FAREWELL, WHITNEY: The record industry’s creepy ability to simultaneously memorialize its fallen heroes while making money off their legacy is in full effect this week. Sony Music U.K. managed to go too far in this direction, crassly raising the prices on two Houston greatest-hits collections by three pounds apiece via iTunes immediately after the singer’s death; the company had to apologize. After Houston died Saturday at age 48 of still-unrevealed circumstances, the Grammy Awards paid tribute Sunday night with an opening prayer by host LL Cool J and a performance by Jennifer Hudson. After that, Houston’s album sales took off. In two and a half posthumous days of iTunes sales (the charts go through Monday), “I Will Always Love You” hit Number Four on iTunes (195,000 digital-song sales overall, Number Three on Billboard’s chart), and Whitney: The Greatest Hits was Number Two on the albums chart. The latter album also hit Number Six on Billboard’s album chart, selling 64,000 copies, up 10,419 percent, although that’s nothing compared to her blockbuster days.