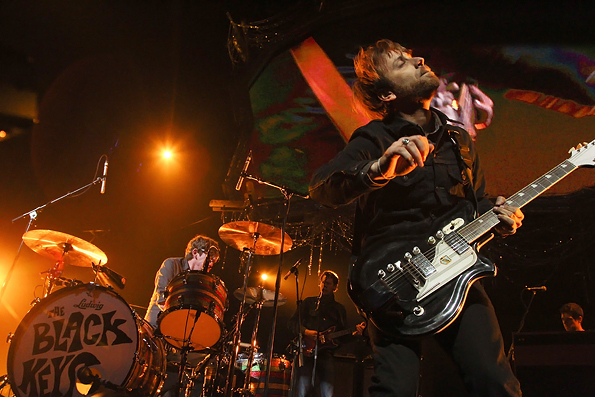 WINNER OF THE WEEK: Rock music. For more than a year, we’ve been reporting on the moribund sales and radio impotence of what was, for decades, the most dominant genre in pop music. Last year, we remarked numerous times on the Cakes, Strokes and Hollywood Undeads that surged up the charts in their first weeks only to plunge into sales obscurity immediately afterwards. And while it’s the slow time of year and CDs have to sell very little to cling to the Top 10, suddenly we’re noticing rock albums with staying power. The Black Keys’ El Camino is at Number Three (with 29,000 in sales) in its seventh week; Coldplay’s Mylo Xyloto is at Number Nine (17,000) in its 13th week; and Nickelback’s Here and Now is at Number 10 (almost 17,000) in its ninth week. These are tiny sales, but they’re something to build on. What the genre really needs is a gigantic, “Rolling in the Deep”-style single to dominate radio and cross over to lift everybody else up.

LOSER OF THE WEEK: Megaupload. The crazy story of Kim Dotcom and his (alleged) $175 million copyright-infringement empire is playing out in a New Zealand courtroom. (To sum up: the 38-year-old German founder of Megaupload.com was indicted last week for building a massive worldwide business off illegal file-sharing, from music to movies to porn; he was denied bail yesterday.) By Megaupload’s own pre-indictment accounting, the site had more than 180 million users and 50 million daily visits and comprised 4 percent of the Internet’s traffic. So now that Megaupload is busted out of existence, will sales of legitimate music surge again, in such a way that the 10th-best-selling album on the charts will no longer sell a minuscule 17,000 copies? The Recording Industry Association of America thinks so, claiming digital-music sales increased last year due to the shut-down of the venerable file-sharing service LimeWire. There may be a bit of truth in that, but we believe Adele’s 21 – which became the biggest Number One album since Whitney Houston’s The Bodyguard soundtrack in this week – and its various massive singles had far more to do with this than any tech company.

SURGING SINGLES FOR EVERYONE: It’s that superstar-single time of year again, when artists prep for pre-summer album releases and try to build buzz as much as possible via YouTube, iTunes, Spotify and, of course, radio. We remarked recently on Jason Mraz’s out-of-nowhere “I Won’t Give Up” (now holding at Number Two on BigChampagne’s Ultimate Chart, which measures Internet buzz). Joining that single in the Surge Department is Tyga’s lowest-common-denominator “Rack City” (now at 17.4 million YouTube views and one viewer’s classic comment, “This porn has terrible music”), which jumped 18 spots on the Ultimate Chart to Number Five; dance-music master David Guetta’s “Turn Me On” (with Nicki Minaj), which jumped 23 spots on last week’s Ultimate Chart and just became the Number One digital single, selling 198,000; and Kelly Clarkson’s “What Doesn’t Kill You (Stronger),” which jumped 53 spots on the Ultimate Chart, to Number 17, selling 175,000 copies this week. These are all over the iTunes songs charts, as well, and could wind up foreshadowing early 2012’s biggest hits.