On the Charts: Michael Buble Gets a Boost From 'Saturday Night Live' - Rolling Stone
×
× 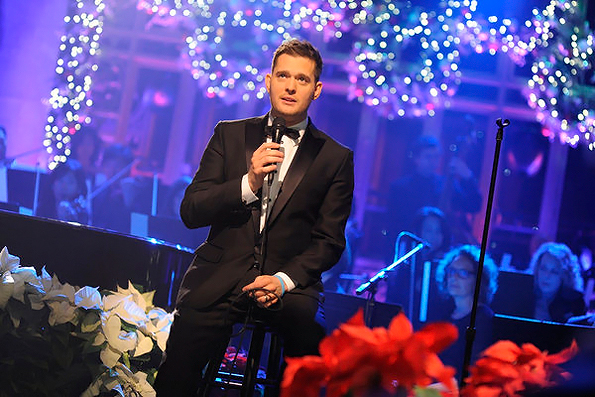 WINNER OF THE WEEK: Saturday Night Live. Could it be that the late-night show legendary for helping to transform acts from Nirvana to Public Enemy into superstars is getting its sales-making power back? Michael Bublé performed on the show last week, and his Christmas album sold another 448,000 copies this week, remaining at Number One (although sales were down 8 percent, if you want to get technical). Even better, American Idol champion Scotty McCreery seems to have benefited from a parody in this Bublé duets sketch. (The imitations are awesome and perfect – check out Jimmy Fallon as Justin Bieber and Sting, Lady Gaga as portrayed by a deformed Christmas tree and Fred Armisen as a dead-on Thom Yorke of Radiohead.) It’s possible that one short viral video is not solely responsible for McCreery’s sudden resurgence, but we’re at a loss to explain what other factors might be at work.

LOSER OF THE WEEK: This is the last On the Charts of 2011 – we’re off next week to observe our various pagan rituals. We mark the end of the year by 1) linking to Billboard‘s final charts for singles (Number One is Adele’s “Rolling in the Deep”), albums (Adele’s 21), tours (U2) and other interesting things; and 2) nothing that Rebecca Black’s “Friday” is nowhere to be found on any of these charts. So, goodbye, 2011, and goodbye, Rebecca Black’s career! We enjoyed both while they lasted and look forward to the massive Kreayshawn comeback in 2012.

TINKERING WITH NEXT BIG SOUND: This is pretty fun: Go to Next Big Sound’s stats page and plug a few artists into the boxes. Using color-coded graphs, the relatively new Colorado-based service compares the popularity of certain acts according to online criteria, including numbers of Facebook fans and last.fm followers. For example, after reading that Lady Antebellum’s Own the Night jumped from Number 15 to Number Five, selling 81,000 copies this week, thanks to TV performances on Good Morning America and Live with Kelly, we decided to compare the band to Toby Keith, whose latest single “Red Solo Cup” jumped 18 spots, to Number 12, on BigChampagne’s Ultimate Chart (which measures similar online stuff). The popularity curves are interesting – Antebellum is huge in general but slowly dropping despite the TV boosts, while Keith is less popular but more steady.