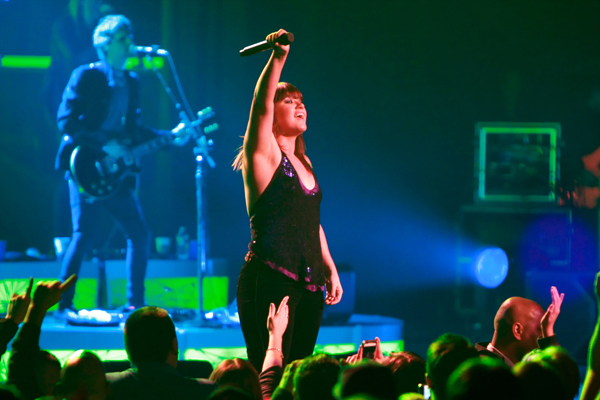 WINNER OF THE WEEK: Kelly Clarkson. Her people pulled all the right levers over the past month and a half to launch “Stronger (What Doesn’t Kill You)” to the top of this week’s Billboard digital songs chart, where it sold 225,000 copies – and hit Number One on iTunes, overtaking even Adele’s “Set Fire to the Rain.” Clarkson performed it just before Christmas on VH1 Divas and early this year on Saturday Night Live, then sold it for $0.99 at Amazon’s MP3 Store, helping to rack up 4 million YouTube views in the process. The single doesn’t have quite the rocking-out resonance of such Clarkson hits as “Since U Been Gone” and “My Life Would Suck Without You,” but it’s catchy and memorable and has a certain survivor mentality that’s kind of perfect for the times. Clarkson never quite explodes onto the charts, but she’s a master of the long, slow burn.

LOSER OF THE WEEK: Guess you all got tired of Jason Mraz in a hurry. In just its third week on the charts, the singer-songwriter’s sentimental “I Won’t Give Up” dropped from Number Eight on Billboard’s Hot 100 to Number 72 – as well as 50 slots, from Number Two to Number 52, on the Ultimate Chart, which measures Internet criteria like YouTube views and Facebook likes. Why the steep drop? Maybe it’s because the pop competition finally emerged from holiday hibernation, compared to the barren early-January period, when “I Won’t Give Up” was the only hit in town. Or maybe it’s this. Either way, it’s not the ideal run-up to releasing an album, which Mraz plans to do in the first half of this year.

A GOLDEN AGE FOR ASS SONGS?: It takes three examples to make a trend, so watch this space when the news breaks that a third song with the word “ass” in the title starts running up the charts. We promise it’ll be any day now. First, Big Sean’s “Dance (A$$),” with Nicki Minaj’s memorable presence, cynically galloped to a peak of Number 10 on Billboard’s Hot 100. Then came Gym Class Heroes’ “Ass Back Home” (as in “Get Your . . . “), which jumped 15 slots, to Number 23, on the recent Ultimate Chart. That’s in part due to the video, co-starring the striking, red-haired, nose-ringed singer Neon Hitch – it’s up to 5.4 million YouTube views and Number 24 on the Hot 100.