In the early Nineties, animator John Kricfalusi cemented his name in cartoon and comedy lore by creating The Ren & Stimpy Show, a Nickelodeon hit buzzing with madcap energy that featured a very excellent song about Canadian kilted yaksmen, among other deranged delights. As of late, the artist has been channeling his creativity toward a similarly over-the-top figure: Miley Cyrus. The pop star’s Bangerz tour, which launched on February 14th and runs through June, opens with an animated video developed by Kricfalusi and his collaborators. The clip features several caricaturized versions of Cyrus, her producer Mike Will Made It, a menagerie of goofy animals and a robot, plus a sequence where Cyrus punches twerking mentor/Bangerz tour dancer Amazon Ashley’s ass. Somehow, this all makes visual sense.

The collaboration’s seeds were sown when Cyrus and Bangerz tour creative director and “We Can’t Stop” video director Diane Martel saw some funny Kricfalusi-created animation loops of Hanna-Barbera characters — an origin that ties nicely into the Bangerz video’s eventual emphasis on Cyrus strutting her stuff.

Rolling Stone caught up with the 58-year-old Los Angeles-based animator, who has also worked on videos for “Weird Al” Yankovic and Tenacious D, to talk about getting swept up in the Miley whirlwind.

Before making the video, you met and sketched Miley Cyrus. What was that experience like?
Diane [Martel] called me up and said her and some other people involved with the tour were going to meet Miley at Chateau Marmont one night. At first, I just went out and grabbed a bunch of tabloids because her picture was all over them, so I started doing caricatures of her using the tabloids, but then I asked, “Can I meet her and just spend an hour with her or something so I can draw her in person?” You see more subtleties in real life than you do in photos. Basically, I just watched her talk to everybody and drew lots of pictures. She was really nice and very creative and all for doing the weird drawings. I drew some ideas on the spot. I did this drawing of her French-kissing a giraffe. I was real nervous [and didn’t want to] offend her or anything, but she said, “Oh yeah, do that! Get that in there!”

What was your level of familiarity with her work?
Well, to tell you the truth, I’m so out of touch with modern pop culture. The only thing I know about pop culture, honestly, is from what I read in the tabloids. For some reason, I’m addicted to tabloids, and I like to draw caricatures of all these people. I know she was Hannah Montana. I’ve seen her performance at the VMA awards, so I kind of know what was going on, but I’m still listening to Cab Calloway. I still watch The Jack Benny Show and The Honeymooners. 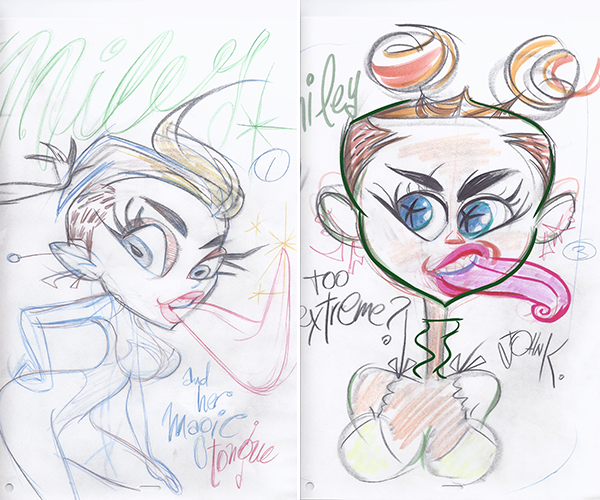 Did you have any reservations about being involved in the project?
No. I mean, I’m kind of surprised when I read this stuff that everybody’s shocked that rock & roll is edgy. Hasn’t that been going on for 60 years? Isn’t that the point? I don’t think anybody who writes these articles is actually shocked. They just figure it’s a good way to sell magazines. Kids want rebellion. I don’t know why anybody’s shocked that there’s rebellion amongst youth today.

How was the Bangerz tour video originally pitched to you?
They wanted animals doing crazy walks and struts. They wanted scenes of Miley. She was really nice when I was drawing her. I did all kinds of different versions. She didn’t give me a lot of direction one way or the other. If I did funny-looking drawings of her, she said, “Yeah, go for those.” If I did really cute drawings, she said, “Go for those.” She looks different in every scene in the cartoon, which I like. I don’t like consistency. I don’t know if you know animation terms, but there’s a term called “on-model” where 99 percent of the animation studios all want every artist to draw exactly the same as every other artist and to never vary what the characters look like, but if you watch my cartoons, they look different in every scene. She encouraged me to do that.

Even though Miley’s only been in the spotlight in her new incarnation for the past year or so, she already has some well-established iconography: sticking out her tongue, the teddy bear backpacks from the VMAs, twerking. How many of those things inspired the video?
Oh, I looked at everything. I watched her do awards. I watched all the videos, “Wrecking Ball” and “We Can’t Stop.” I took bits and pieces from everything. There’s scenes in the cartoon where she has the hair she had — those two balls on top of her head — from the VMA awards. I’ve got her twerking in there. I have her with the big finger. She’s changing her image all the time. Even right at the last couple of weeks, I think she changed her image again to more of a glamour girl. I saw some photos of her looking like a Fifties bombshell. I got a little bit of that in there at the last minute. That’s fun, though, for me. I don’t like people to stay the same all the time. It’s boring doing the same thing over and over again.

Are there any allusions to any of your other work in the Bangerz video?
Well, not on purpose. Maybe the twerking. Right after Miley slides out on the tongue on stage, the first scene is Miley twerking with her husky. We did a cartoon version of her husky, and that’s very reminiscent of the [Ren & Stimpy‘s] “Happy Happy Joy Joy” song when they’re butt-dancing.

What made you think your and Cyrus’ styles could sync up? It’s one thing to be offered the project, it’s another to accept it.
Well, I gotta eat, right? Honestly, whenever I do music videos, they’re generally more creative than when I do television shows. Musicians like weird stuff. They like creativity, whereas TV executives don’t, really. They’re always telling me to tone it down: “Don’t make this as funny”; “Can you make it not look so weird?” If I get to be creative, I’m not going to turn that down, that’s for sure. I love doing caricatures, so it was fun to animate caricatures. It’s hard to do it, but I like to do it.