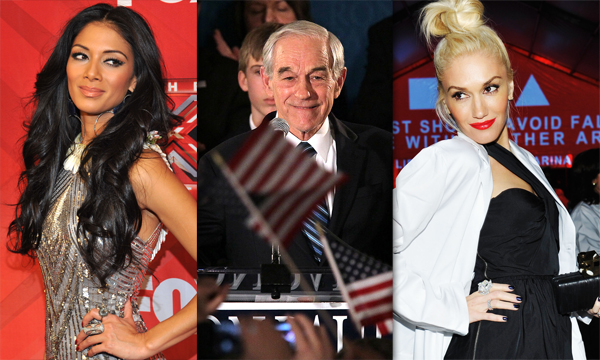 This morning, Ron Paul received some very public support from No Doubt, Nicole Scherzinger and Rise Against – but not by their own volition, as the musicians’ Twitter accounts were hacked by Paul supporters.

This morning, tweets appeared on the pages of the three recording artists endorsing the libertarian politician; they were all removed within a few hours, but Billboard has a screen grab of the tweet that appeared on the page of punk rockers Rise Against: “We endorse Ron Paul this 2012 too. We love you Ron! #ronpaulrevolution” with a link to donate to Paul’s campaign. The staunchly progressive band later posted: “As you would all assume, We DO NOT support Ron Paul.”

No Doubt’s impostor took things a step further with two tweets. First came: “Today We Officially Endorse Ron Paul 2012 Donate to him here #ronpaulrevolution” with a link to donate, followed by: “If you actually read what Ron Paul is saying, you will discover that for the first time in your life a politician is not lying to you.” The band later posted that they had no political endorsements at the present time.

As Billboard notes, all three of the hacked artists are currently signed to Interscope Records, providing a possible clue as to the identity of the hacker. As it is, Ron Paul has recently received favorable – and legitimate – Twitter attention from Kelly Clarkson and Michelle Branch.