The surviving members of Nirvana reunited in Los Angeles Saturday for a special one-night-only performance as Dave Grohl was joined by Krist Novoselic and Pat Smear at the 2020 Art of Elysium Gala, an annual fundraiser that connects artists with children and communities in need.

Playing before an enraptured crowd at the Hollywood Palladium that included everyone from Billy Idol to Bella Hadid, the three tore through a five-song set of Nirvana’s hits, with Beck, St. Vincent and Violet Grohl (Dave’s 13-year-old daughter) taking over lead vocals from the late Kurt Cobain. The event marked the first time the trio has played together since October 2018, when Novoselic joined Grohl and Smear onstage for a six-song encore during the Foo Fighters’ set at Cal Jam.

Back to Live, Back to Reality

On Saturday, St. Vincent kicked off the show with “Lithium,” the same song she performed at Nirvana’s Rock and Roll Hall of Fame induction ceremony in 2014.

Beck took the mic next to sing “In Bloom,” with Grohl and Clark on background vocals, then introduced “Been a Son” as the song that put him in “the most insane mosh pit [at the Palladium]” when Nirvana played the iconic Sunset Boulevard venue almost three decades earlier.

WATCH: Dave Grohl, @KristNovoselic, and Pat Smear reunite at @TheArtofElysium gala, joined on stage by @beck and @st_vincent to perform #Nirvana’s cover of “Man Who Sold the World.” pic.twitter.com/t0ntCHUDPo

Grohl stayed behind the drum kit for the entire set and didn’t speak much, though Novoselic did thank the crowd for coming and asked for, “A cheer for Kurt Cobain” (the audience responded enthusiastically). As for what brought the band back together: “We couldn’t resist the temptation,” Novoselic said.

When Grohl finally took the mic, it was to introduce his daughter, Violet, who joined the group on stage to perform “Heart-Shaped Box.” The teenager quickly won over the crowd with her steely disposition and angsty rendition of the track, which was first released in 1993, a full 13 years before she was born.

The set finished with the group performing David Bowie’s “The Man Who Sold the World,” famously covered by Cobain for Nirvana’s MTV Unplugged in New York.

Other performers at Saturday’s fundraiser included Cheap Trick, L7 and Marilyn Manson, who was accompanied by Shooter Jennings and Linda Perry for “The Dope Show” and the crowd-pleasing, “Sweet Dreams (Are Made of This)”. On the red carpet, Manson said he was excited to be on the same bill as Grohl and company. “I saw Nirvana play with Jane’s Addiction in Miami when they were on the ‘In Utero’ tour,” he recalled, “and the guys have always been nice to me. I sadly never got to meet Kurt [before he died],” he continued, “but I’m friends with Courtney… tentatively,” he added with a smirk.

Other guests, from Moby to X Ambassadors all praised the impact of Nirvana not only on popular music, but on their own careers as well.

“The first time you hear Kurt Cobain’s voice you can’t help but connect to it,” said X Ambassadors’ lead singer Sam Harris. “It’s just got this visceral, powerful feeling that you want to emulate.”

“When I was 13, Dave [Grohl] married a close family friend of mine and gave me my first drum set,” added drummer Adam Levin. “You can’t even put into words how incredible his career is; he’s been such an inspiration.” 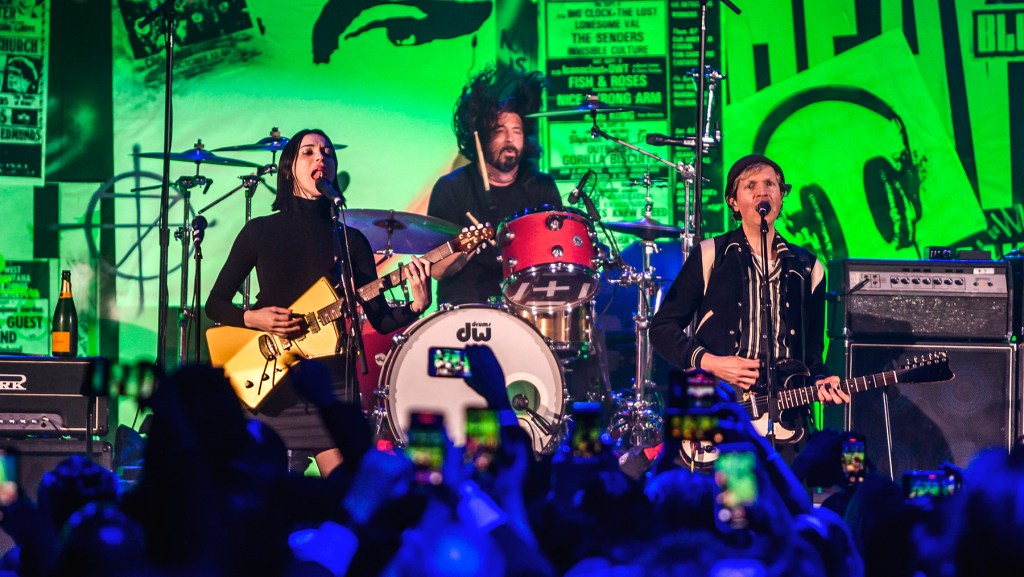 January 4, 2020: Dave Grohl & Friends perform at The Art of Elysium Heaven Gala at the Hollywood Palladium

As for Moby, he credits Nirvana — and a couple ex-roommates — for getting him into rock. “I wasn’t cool, but when I lived in New York in the late 80s and early 90s, I had roommates who were these really cool indie rockers that would play My Bloody Valentine and Nirvana and all that super obscure indie rock of the late 80s,” he explained, adding, “I never met Kurt, but I’m friends with Krist and Dave, which makes it so exciting to see them play together again.”

This was the 13th year of The Art of Elysium’s “Heaven” gala. This year’s theme was “HEAVEN is Rock and Roll,” a theme curated by event partners, WE ARE HEAR, the publishing firm-slash-management and production agency founded by songwriter Linda Perry and music producer Kerry Brown. Proceeds from the evening go toward supporting The Art of Elysium’s roster of programs that pair volunteer artists with communities or individuals in the midst of physical, social, emotional or mental upheaval.