After an opening day punctuated by Paul McCartney’s serenading of Golden Gate Park, Saturday at Outside Lands got straight to the point with incendiary guitar work by Gary Clark Jr., who proved his newfound main stage status and got the crowd fist-pumping before the clock even hit 3 p.m. – early, by rock & roll standards.

Young the Giant barely made their 3:40 p.m. curtain call, but they had a fair enough excuse. “It’s been an adventure getting here,” said frontman Sameer Gadhia. “There was a three-hour delay with our plane.” The band thanked the city of San Francisco for giving them a police escort so that they could make their set and entertain the crowd with material new and old, including “Anagram,” a new anthemic rocker.

Outside Lands Music and Arts Festival 2013: Onstage and Behind the Scenes

In contrast to the overflow crowd for Paul McCartney’s headlining set Friday night, the former Beatle’s son James only drew a few hundred people or so to his mid-afternoon performance at one of the festival’s smaller stages. Those who made the effort, however, heard an agreeably modest solo acoustic performance of folky tunes sung in a pleasant, high voice, with the most laconic of between-song banter styles. However, James has yet to write a tune nearly as good as his signature cover song, Neil Young’s “Old Man.” His unplugged setup might be a better match for San Francisco’s rootsier Hardly Strictly Bluegrass Festival, also held in Golden Gate Park.

Sharing a time slot with headliner Nine Inch Nails might seem like a thankless task, but Phoenix held their own with a set at the opposite end of the festival site. “It’s packed!” gasped singer Thomas Mars as the spotlights scanned the Hellman Hollow audience, obviously up for lighter and more bouyant fare than the kings of industrial rock were pounding out a few fields down the road. Riding the crest of a wave that has seen the French band crack into the US Top Ten and play four major North American festivals (including Lollapalooza) in the last ten days, Phoenix had little trouble wooing the crowd with their brand of sweet but forceful power pop. Over half of their breakthrough 2013 album, Bankrupt!, made it into the set (opener “Entertainment” was reprised at the end), with much of the remaining material hailing from their previous effort, Wolfgang Amadeus Phoenix, though a few songs from their now-distant 2000 debut Too Young were on hand to reward those who’ve stuck with the band from the beginning. 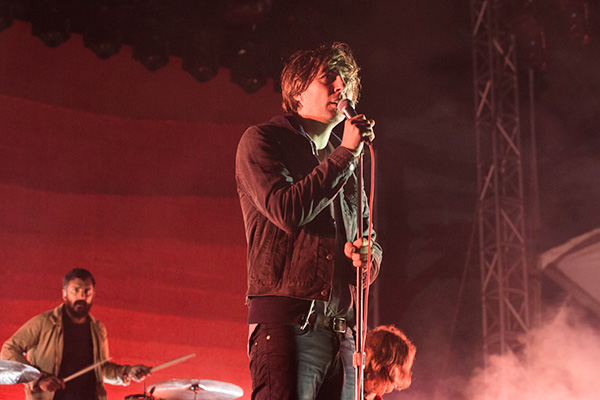 Meanwhile, the majority who caught the reunited Nine Inch Nails were treated to a show that was every bit as cathartic and powerful as Paul McCartney was in the same slot and stage a day earlier. While Nine Inch Nails’ “Hurt” may be worlds apart from McCartney’s “Yesterday,” the two songs had a surprisingly similar effect on the audience, flooding them with emotion and the kind of grace that can only be achieved in the arms of music. Frontman Trent Reznor delivered an onslaught of NIN classics, such as “Head Like a Hole,” “Wish,” and “Something I Can Never Have,” with all the vitriolic piss and vinegar of their original recordings. That, matched with a stage set and production that was part minimalist, part psychedelic, and part iPad commercial, made for one of the most memorable Outside Lands sets in the festival’s six-year history.

Many other highlight-worthy acts performed on Saturday, including Tallest Man on Earth, Jurassic 5, the Mother Hips and Grizzly Bear. Despite the festival’s bells and whistles (including the cornucopia of high-quality food, beer and wine options available in every nook and cranny of the park’s idyllic topography), surreal setting and dream-like atmosphere, the music itself prevailed as the main attraction after all. “It’s music!” yelled one fan, from the front row, repeatedly. And she was right. It may only be rock & roll, but – in Golden Gate Park on Saturday – 65,000 fans loved it. 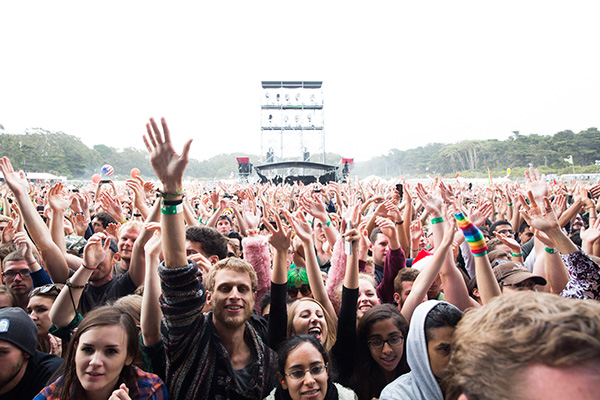 Outside Lands continues on Sunday with sets by Red Hot Chili Peppers, Hall and Oates, Vampire Weekend, Kaskade, Willie Nelson and many others.