“We’re all jet-lagged,” Trent Reznor told the audience last night, a few hundred fans crammed into a tiny club in Los Angeles. “We’ve been criss-crossing the globe, playing all sorts of shows. Thank you for whatever humiliating things you had to do to get tickets.” The occasion was the release of Nine Inch Nails‘ latest album, Hesitation Marks; the venue was the Troubadour in West Hollywood, a storied room best remembered for hosting the likes of James Taylor and Carole King in the Seventies. (Sadly, Reznor was not inspired to bust out an acoustic guitar for some Tapestry covers.)

Where Does Nine Inch Nails Rank on Our Greatest Artists List?

For an hour and three quarters, Nine Inch Nails stripped away most of the production elements of their current tour (which has hit major rock festivals in recent months): what remained were some colored lights, a strobe and a smoke machine. Oh, and Reznor’s unrelenting intensity. He punched himself in the head, he clung to the microphone stand like it might blow away, he howled like a bleeding animal. Reznor doesn’t scream on Hesitation Marks (which the band did just three songs from); at the Troubadour, he showed that was an artistic choice rather than a physical limitation. 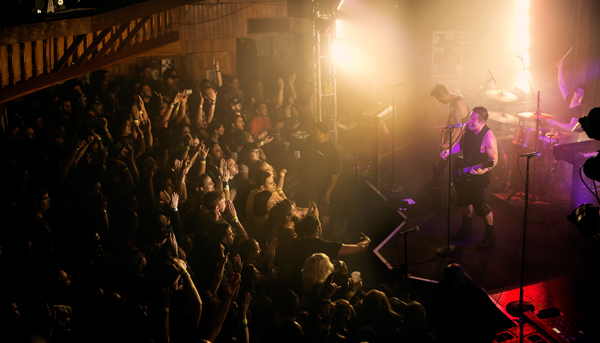 “I can’t find the set list,” Reznor noted at one point, not sounding concerned. He could have picked almost anything from his back catalog, and the sweaty, happy audience would have sung along, fists in the air. The five-piece band moved effortlessly from stomping rock to throbbing electronica, and even did a gorgeous instrumental, “La Mer,” in the encore. Highlights included the funky “The Hand That Feeds,” the new single “Came Back Haunted” and the night’s final song, a particularly raw version of “Hurt.” Reznor gave an understated vocal performance, perfectly sized for the hushed room, which built until he was drowning in his own pain.

Chatting with the audience, Reznor noted that on the small stage, he had no place to hide; he felt that every mistake was obvious, like when he fluffed the lyrics to his collaboration with David Bowie, “I’m Afraid of Americans.” Or as he told the crowd after playing “Disappointed” about halfway through the show: “Usually by this part of the set, we’ve been replaced by robots and we’re backstage, relaxing and catching up on Breaking Bad.”