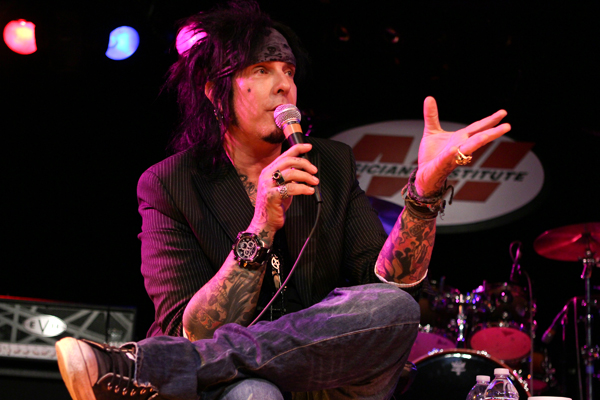 Mötley Crüe‘s much ballyhooed Vegas residency this coming February only lasts three weeks, but bassist Nikki Sixx tells Rolling Stone it’s just the start of what will be a crazy schedule for the band. “This is the beginning of what will be the biggest probably four to five years of the band’s career,” he says. “We’re negotiating with a couple of other extremely huge bands on doing a co-headline tour, something that’s never happened before. There’s new music in the future.”

New music isn’t the only project in the pipeline.”The other thing to look at is the wheels are in motion for getting the Mötley Crüe movie made now,” Sixx says. “We finally got everything in order the way it needs to be done, and that’s gonna happen.”

The movie has been discussed for some time, and while Sixx can’t give specifics yet, he promises the film, based on the group’s memoir The Dirt, will happen. “We have sort of an agreement with a production company, directors, etc, to right now just keep it amongst ourselves,” he says. “So once we have everything really together, we’re gonna let everybody know. But trust me, when I say the wheels are in motion they’re definitely in motion.”

This could be a last hurrah for the iconic metal group. “The band sat down and had a powwow as brothers and friends and guys who’ve been doing this for over 30 years, and we said, ‘When is it time?'” Sixx says. “We’ve always said since we were kids we didn’t want to hobble in to the sunset. So after the movie, at some point – whether it’s within a year or a few years – we’re probably gonna have that conversation about maybe it’s time, maybe it’s time to go out on top.”

Sixx has an idea of how he wants Crüe to call it a day “If I’m watching my favorite boxer and he’s just won the heavyweight championship of the world and he retires it kind of makes the guy a legend,” he says. “I always respected Led Zeppelin, and I’d rather Mötley Crüe be thought of as that type of band rather than a band that’s just going through the motions.”

For the moment though Sixx says everybody in Crüe is very focused. “We’re a hundred percent engaged,” he says. “We’re sounding better than we’ve ever sounded musically.”

If and when when the end does come, Sixx can look back on a very successful run. “We’re really proud of what we’ve done, whether critics like us or not, whether we’ve won Grammys or not, whether any of that stuff,” he says. “We’re proud that we did it on our own terms.”