Last Monday, Aubry “Big Juice” Delaine went into the studio for a marathon recording session with Nicki Minaj. He didn’t leave again until Thursday night, when they had finally completed the rapper’s new Queen album, which hit streaming services Friday around noon.

Delaine has served as Minaj’s go-to recording engineer since 2014’s The Pinkprint; you can hear Minaj shout him out at the end of Queen‘s “Chun Swae.”  “All of her parts, I recorded everything top to bottom,” he says. “I’m always recording. The thing you might miss is the thing that might change the entire song, make the difference between a smash song and an average song. I’m not gonna be the one that doesn’t get that shit recorded.”

Delaine spoke with Rolling Stone about Minaj’s off-the-cuff freestyles, the importance of the first take and cracking up during the making of “Barbie Dreams.”

Did these songs all come together recently?
I’d say the oldest one is probably “Hard White.” We did the little three-pack [“No Frauds,” “Changed It” and “Regret in Your Tears”] in Paris. I remember somebody had already sent her that beat [for “Hard White”] and she was just doing ideas to it. She came back to it later, then we were in New York, so maybe December or January she finished it. But we had that beat the longest.

I have a new favorite song pretty much every other day, but “Hard White” to me has my favorite verse on the whole album — the first one is vintage Nicki. It doesn’t get any harder. That’s bar after bar after bar of untouchable bars.

Listening to her Apple broadcast, it seems like she’s really interested in reminding listeners about the importance of lyricism in hip-hop right now.
It is really important. That gets lost nowadays with the new generation of rappers. Nothing against them; they have dope vibes too. But my generation grew up listening to Biggie, Pac, Scarface, Jay-Z. When anybody comes with bars and is really talking about something, I’m attracted to that. She pays attention to that, puts in the time to make sure her lyricism is on point.

There’s a lot of people who don’t understand why Nicki’s the best. Since I’ve been working with her, I understand. She will not leave the studio until the work is done. We have edits of songs that reach into version 25, 26, 27, 28. She will meticulously go in and change every little thing; even during the mixing process, she’s sitting there making sure every word, every syllable, every inflection is heard. Even the “s” sound on the back of a word — if that doesn’t cut through right, she’s gonna make sure people hear that sound. That attention to the detail is why she’s the best. I’ve never worked with an artist who paid that level of attention.

Do you think young listeners are still looking for lyricism?
I think they do. More and more rappers aren’t giving that to them. But the best rappers today are still on that level, Kendrick and J. Cole. People still listen to Jay-Z because he brings that lyrical prowess. That’s not being showcased as much as it was. But kids will still flock to it. They still look for bars. 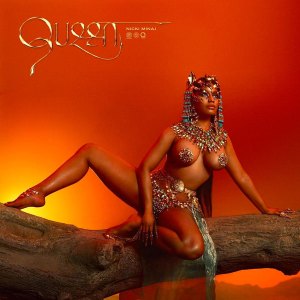 Getting into some of these tracks, what was it like recording “Ganja Burns?”
That was crazy, because she probably freestyled 65%, 75% of the song. She got the beat from her producer J. Reid, head it, told me to load it up and ran in the booth. It was kind of the same with “Chun-Li.” She was playing around, singing, “ganja burn, ganja burn, ganja burn,” and then when she listened back, she was like, “that shit’s hard!” I wanna say the hook is still the freestyle she laid when she first stepped in the booth. She pulled that shit out of thin air.

Does she do that a lot?
She does. I used to work with another writer before I worked with Nicki and I learned that normally the first idea you have on a track is the right idea. Nine out of ten times, that first thing is best, because you’re winging it, feeling it out, not overthinking it. It might be some stuff you wouldn’t normally do if you were writing it out with a pen.

So you always have to be recording.
Always. Even when she’s listening back, maybe she does a line and wants to hear it, I’m recording then, because sometimes she might be feeling it and throw in a great ad-lib. She’ll be like, I want to record that ad-lib — “already got it, don’t worry about it.” I learned that lesson from working with Polow da Don and Ester Dean. I’m always recording. The thing you might miss is the thing that might change the entire song, make the difference between a smash song and an average song. I’m not gonna be the one that doesn’t get that shit recorded.

What was it like working on “Majesty?”
When we heard the piano part, we were like, “oh, that’s a pretty cool beat.” Once it dropped into the [sings more aggressive part], everybody went crazy. But I didn’t know she was putting Eminem on it until the last couple of weeks when he sent it back. He’s still one of those guys who pays attention to lyricism, and as you can tell on this song, he went in. When that beat drops, that is crazy. Then it changes again in the outro with that Caribbean vibe. Likely by next week, “Majesty” is gonna be my favorite song.

Where does “Barbie Dreams” fall in your ranking?
That’s what hip-hop is all about. That’s hip-hop in its truest form. She told me to load up that beat, put it on loop, and give her about twenty or thirty minutes. Then she goes in the booth and lays that shit down, and that’s what you got. I didn’t know what she was gonna say. I wanna say she did 90% of that in one take. She mumbled the hook when she was laying the verses, laid the rest of it, went back and put the hook in the middle. When I heard it — “this is incredible.” She did it masterfully. I remember listening to Biggie’s song when I was a kid. I was young as hell listening to this song and laughing about it. I hope that shit go top five next week. I was laughing the whole time she was recording. When she finished, I hit the talkback button, “like this shit right here!” She was laughing too.

A few songs later on the album, with “Thought I Knew You” and “Run and Hide,” there is more of a vulnerable feel — do you have to record those songs differently?
When I was doing “Barbie Dreams,” I kept referring back to the actual Biggie songs. I tried to use old-school reverbs. Lyrics back in those days were very reverb-heavy, so I tried to capture that. On “Thought I Knew You,” it had to be smooth, something that changed your mood and put you in another place when you listen to it. The sonics have to match the mood that is being sung or rapped about. If you listen to “Hard White,” the part about the mirror, when she does that answer back — “you the fucking fairest, Nicki!” — I knew I was going to put a different effect on that voice to give it a supernatural vibe. It adds to the character she creates in the booth. I try to help give each character a different voice.

Did you also record the song with Nas that appeared online after the album came out?
Yeah. I didn’t record Nas, though. I was online and I saw that was out and I got scared — how did this song get out? I assumed the clearance stuff would be resolved, but I don’t know anything about the business parts of it. I honestly didn’t know that was a sample; I hadn’t heard the original.

What about that Foxy Brown record?
Oh my god! That was my favorite song before “Hard White.” At first she was gonna keep it all for herself, but then she told me, I have the perfect person to put on this: Foxy. That beat was so nasty. The fondest memory I have of that song, when Nicki first got that beat, she was in New York, it was cold as shit, fucking 12 degrees. Are you in New York?

Yep.
I don’t see how y’all deal with that cold-ass weather. Snowing, 12 degrees out, I had to go to the studio. They had that beat playing, she started freestyling again. That beat is straight old-school reggaeton mixed with gutter New York rap. That song screams New York. She really kept hip-hop culture in mind during this album.

Were you involved with any of the sequencing decisions for the album?
She handles that. She had a dry erase board, would write out the sequence, change it up, change it up. She wanted every song to be a potential single. There’s no filler on here. Most artists’ albums have some filler on there. On Queen, there’s no song on there like that. The way she has the singing song group, then goes back into the rap — I love it. She’ll ask me my opinion — would you choose this one or that one? Should this make the album or not? My opinion is always yes. If it was up to me, her album would have had 30 songs on it.