Punk rockers Violent Femmes and forever-popular jam band the Grateful Dead are among the surprising group of musicians getting into the sneaker arena this season, launching exclusive collaborations with some of the biggest brands in footwear.

While hip-hop artists and pop stars like Kanye West and Selena Gomez have had successful shoe collections for years (with adidas and PUMA, respectively), this is the first foray into the footwear world for Violent Femmes and The Grateful Dead, two names not usually synonymous with fast fashion.

Here’s a look at their new shoes, plus two other unique collaborations launching this spring. These limited-edition collections are expected to sell out fast, so shop early to grab a pair for yourself.

The Femmes have teamed up with skateboarder and Nike ambassador, Stefan Janoski, on a special-edition shoe that pays tribute to the band and their hit 1994 song, “I’m Nothing,” from the band’s 1994 album, “New Times.”

Janoski, whose popular “Nike SB” skateboarding line with Nike celebrates its 10-year anniversary this year, has been a life-long fan of Violent Femmes and says he wanted to create a one-of-a-kind shoe inspired by the lyrics from the song. 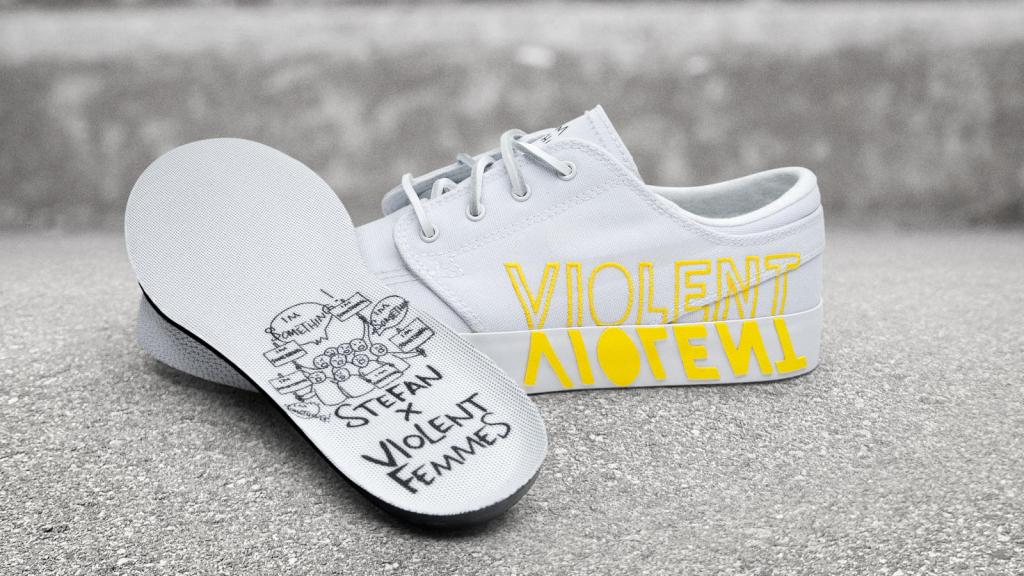 To wit, the unisex sneaker features the words, “I’m Nothing” in Janoski’s handwriting screen-printed on the tongue, and his artwork is seen on the custom sockliner. The word “Violent” is chain stitched on the left side of the shoe, and on the right shoe is “Femmes” in a custom “Tour Yellow” colorway.

After reuniting in 2013, Violent Femmes has toured across the country and the band is currently working on a new album. As part of this Nike collaboration, a new version of “I’m Nothing” will be re-released on the album — this time featuring Janoski’s vocals. The Nike SB Zoom Janoski “Violent Femmes” retails for $90. It hits stores and Nike.com this August.

Speaking of Nike, the company’s Jordan Brand subsidiary has been riding a wave of nostalgia over the last few years, propelling the classic Air Jordans back into the mainstream. This week, Jordan Brand launches a new pair of AJ1 sneakers co-designed by Travis Scott. First teased on stage during the rapper’s Grammy performance in February, the new sneaker is rendered in muted earth tones of brown, black and white, with hand-sketched logos. Subtle details include a backwards Nike Swoosh and branding motifs from Cactus Jack, Scott’s Houston-based record label. 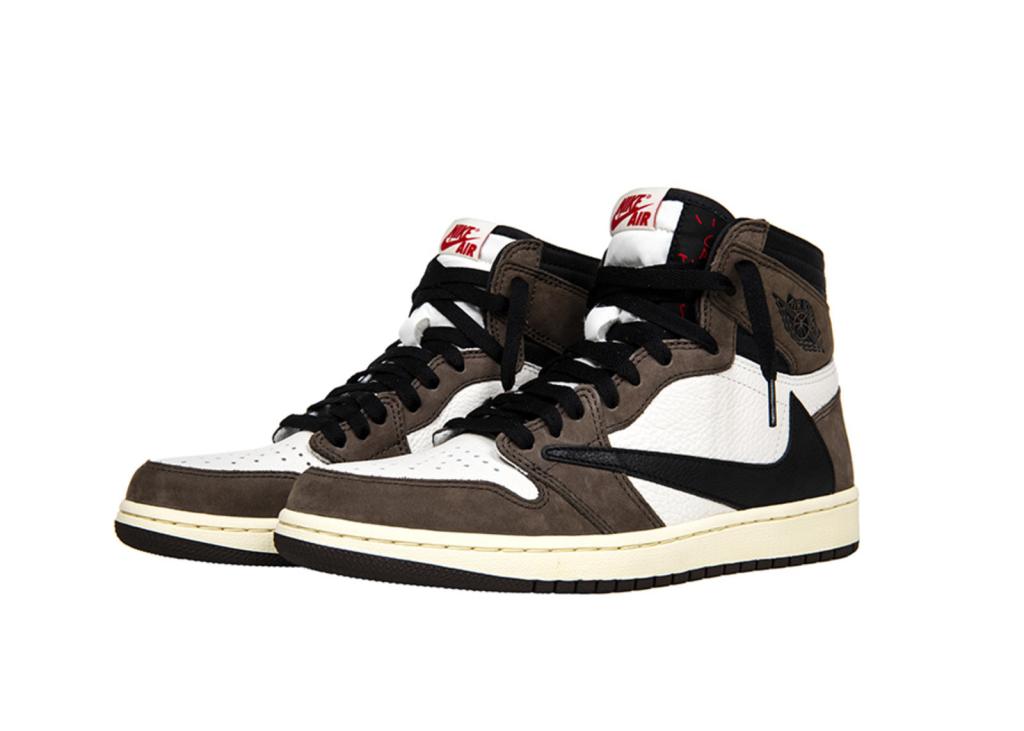 “These Jordan 1s are just a fresher version of my old play shoes,” says Scott. “The colors are from tones and textures of what I saw growing up and remind me of my backyard and playing outside.”

In addition to the AJI High OG, Scott will also be debuting an apparel collection complete (think hoodies, fleece shorts, a tracksuit and tees) with Cactus Jack colors and imagery. The AJI High OG Travis Scott collection will be available May 11, on SNKRS and Nike.com.

When adidas announced last fall that they would be collaborating with actor and musician Donald Glover (a.k.a Childish Gambino), the company said they were looking to Glover to bring his unique voice and “artistic vision” to the venerable footwear and apparel brand. This spring, the first fruits of this partnership have been revealed, with the launch of three sneaker styles along with a series of short films. 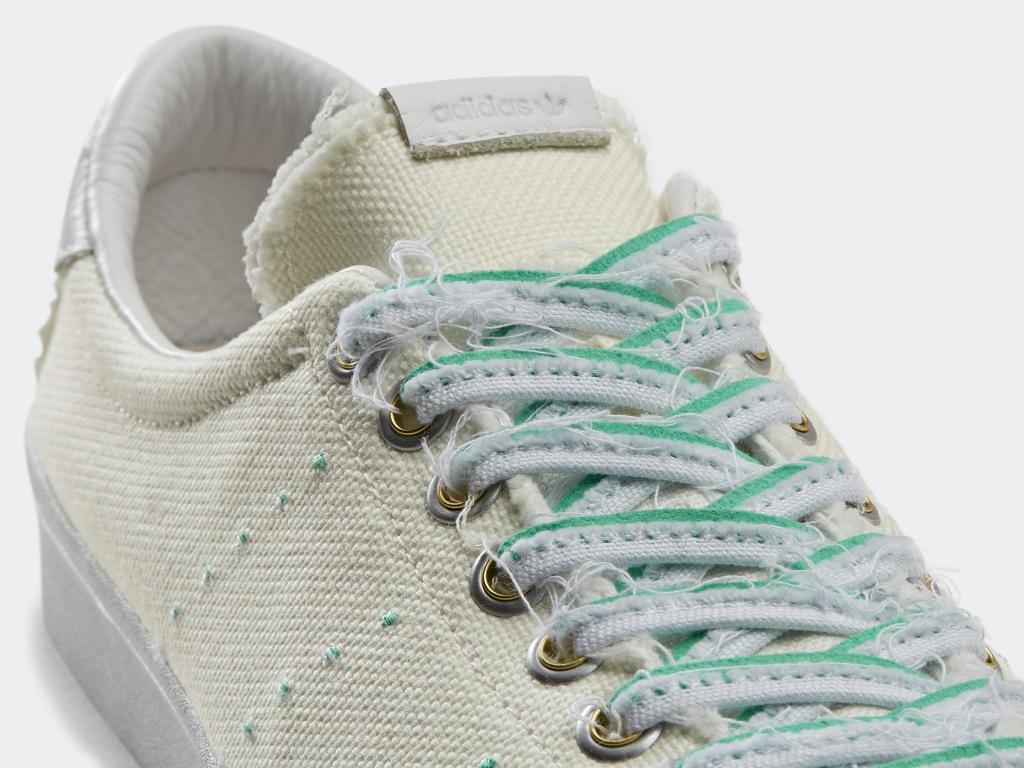 Other details include inside-out golden eyestays, and a custom 3-Stripe mark meant to resemble a hand-painted logo. Each pair of the limited-edition shoes comes in an inside-out adidas Originals box that includes three sets of custom shoelaces designed to fringe over time. The symbol of the collaboration is a moth, itself a symbol of growth and rebirth. The goal: to show how shoes — like people — evolve through the years, expressing more personality over time.

Along with the product launch, Glover and adidas premiered a series of short films, starring Glover and actress-comedian Mo’Nique with a cameo by professional skateboarder Na-Kel Smith. According to adidas, the films touch on themes of “defiance, subversion, and creative expression,” showing that “worn shoes are not merely ‘dirty;’ they are a reflection of one’s personal experiences.”

The shoes retail between $80-$100 and are available on Adidas.com. You can also find them on re-sale sites like stockX.com.

Finally, for something completely different, leisure footwear brand Sanuk has launched a collaboration with iconic rock band the Grateful Dead. The collection, which fittingly was announced on 4/20, includes flip-flops, sandals and casual slip-ons in tie-dye, earthy tones and counterculture-inspired motifs. 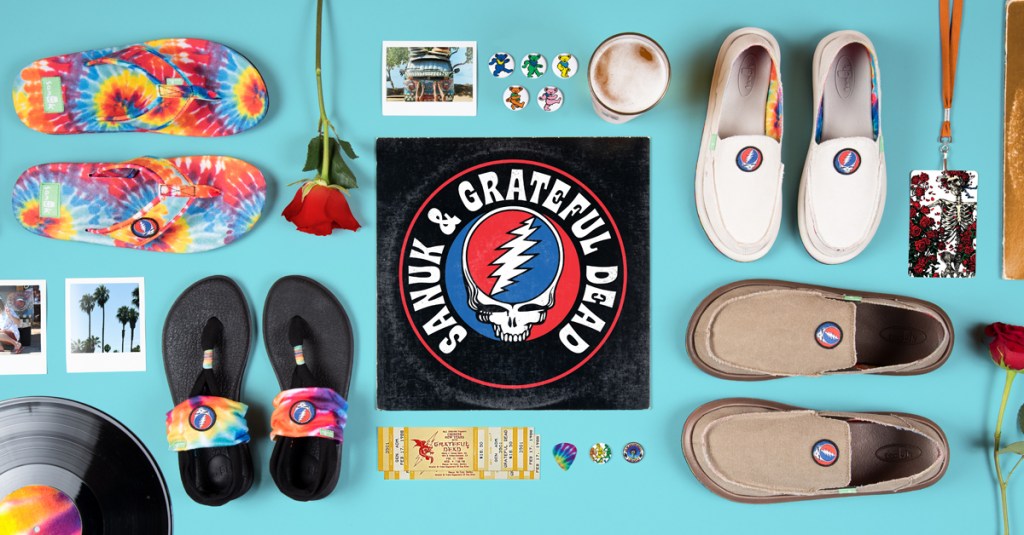 Sanuk says partnering with the band was a no-brainer, thanks to their shared values of freedom of expression, individuality and a “freewheeling spirit to life.” Though the band members were not directly involved in the design of the shoes, they did give their blessing for the collaboration.

“When the Grateful Dead forms new partnerships, the goal is to collaborate with those who have a vision and mission, both culturally and socially, that aligns with that of the band,” says Mark Pinkus, President of Rhino Entertainment, who oversees Grateful Dead Properties. “I feel confident that if Sanuk had existed 50 years ago, parking lots of Dead shows would have been filled with their shoes and sandals.”

Styles and sizes are available for both men and women. Prices range from $40 to $65 and will be available online and in-stores June 1.