The career path of Canadian singer-songwriter is one of the most intriguing in pop music: Her music is all over the place.

Beginning with her debut album Whoa, Nelly!, released in 2000 and filled with hit singles like “I’m Like A Bird” and “Turn Off The Light,” Furtado’s been directly in the public eye, garnering Grammy nominations and praise for what at the time sounded like clever and sophisticated music with a pure pop base. But with her follow-up album Folkloreóand the eye-opening collaborations she recorded with the likes of Jurassic 5, Paul Oakenfeld, and Colombia’s Juanesóit became evident that the singer had musical roots much more adventurous than the norm. With her massively successful set Loose, a 2006 set owing much to her work with producer Timbaland, the singer topped charts all over the world with such tracks as “Promiscuous” and “Maneater” and seemed squarely headed for the top ranks of pop diva-dom.

But Furtado followed her art, rather than the money, and soon followed up Loose with the unexpected Mi Planóa superb set recorded in Spanish and winner of the 2010 Latin Grammy award in the Best Pop Vocal Album, Female categoryóand in many ways set up a musical future that would allow her to go anywhere, and in any direction, she desired. 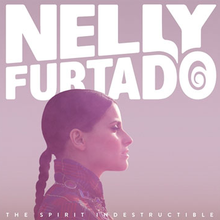 And now Furtado is set to return with a new album, The Spirit Indestructibleóa return to her pop roots, true, in the sense that it’s an English language album, but one which has taken all the musical diversity she’s displayed since her 2000 Whoa, Nelly! debut and taken it to new heights.

Y! Music was delighted to host the singer and her accompanying guitarist in our studio recently, where she offered all of us a taste of what we can expect from the new album, a striking acoustic version of her latest hit “Big Hoops (Bigger The Better),” a surprising rendition of “Maneater,” and an inspiring, fact-filled interview in which the singer charmingly revealed where life has taken her in the past few years. A warm, friendly person with a bigger-than-life voiceóthose of us in the studio that morning were surprised she could reach those high notes with such easeóFurtado is ready to return in a big way.

Take a look and you’ll see what we mean.