Before Joseph Jefferson penned a string of hits for the Spinners in the early Seventies, he and his band the Nat Turner Rebellion – named after the 1831 slave revolt – entered Philadelphia’s famed Sigma Sound Studios and, over the course of a few years, laid down more than a dozen of searing funk-soul songs that were emblematic of the sound piping out of the City of Brotherly Love at the time.

A handful of the tracks were released as long-forgotten singles in the early Seventies, but the group disbanded before ever releasing a debut album. For the most part, the Nat Turner Rebellion’s recordings remained untouched for nearly 50 years. Until now.

The release of Laugh to Keep From Crying is the culmination of years of work for Reservoir’s SVP of A&R and Catalog Development Faith Newman, Toby Seay, the Project Director of the Drexel University Audio Archives, and Marc Offenbach, a marketing vet at Columbia and Universal Records who is now a faculty professor at the Philadelphia university. After receiving the Sigma Sound Studios’ extensive 7,000-tape collection as a donation, the duo endeavored to release something from Philly’s vibrant musical history through the university’s in-house MAD Dragon Records.

Vinyl Now Makes One-Third of the Money in Physical Music

“It was basically a donation, the tapes that were left over when the studio closed,” Seay tells Rolling Stone of the Sigma Sound collection. “It came unorganized, uncatalogued, kind of a mess. In the early days of putting together this catalog, one of the earlier tapes that just popped out to me was the Nat Turner Rebellion tape. The name just jumped out at me: Knowing about the slave revolt in 1831, and here’s a tape of a band that named itself after that, it was very intriguing. So I played that one immediately [and] fell in love with it.”

As Newman brought the project to Drexel, Seay plunged into the Sigma Sound collection to discover the initial tape, which contained the tracks “Tribute to a Slave” and “Plastic People,” and emerged with the group’s entire output: 14 recordings the band laid down between 1969 and 1972.

Laugh to Keep From Crying, released with Jefferson’s approval, features those tracks, including the band’s three seven-inch singles – commercially unsuccessful but cherished by record collectors – as well as unreleased tracks recorded and earmarked for the Nat Turner Rebellion’s never-released debut album.

“Joseph Jefferson’s telling of the story is basically the band and the record label didn’t see eye-to-eye,” Seay said of the Nat Turner Rebellion’s relationship with Stan Watson’s Philly Groove Records, which wanted Jefferson’s group to sound more like the label’s marquee act the Delfonics. While Jefferson would temper the Nat Turner Rebellion’s sound to more resemble the Delfonics, the band still tackled more serious subject matter than its labelmates. “It was kind of a push-and-pull with the record label,” Seay added.

However, when the Nat Turner Rebellion finally had enough tracks in the can to release a debut LP after three years of recording, the group splintered for good: Jefferson became a songwriter for acts like the Spinners, Patti LaBelle and the Three Degrees, while his bandmate Major Harris joined the Delfonics and embarked on a solo career. Harris died in 2012.

Neither artist revisited the Nat Turner Rebellion tapes, which remained untouched – and, thankfully, well-preserved – for nearly 50 years later until they were unearthed from the Sigma Sound collection. “In retrospect, you look back at this stuff and it does go together, it all tells a very Philly, very American story,” Seay said.

With the Nat Turner Rebellion rediscovered, the next step in the process was bringing the songs to the public. “We have our own independent record label at Drexel University [called] MAD Dragon Records,” Offenbach told Rolling Stone. “I kept asking Toby, ‘Is there something cool and unreleased we could put out, get all the students involved and make it an academic piece, plus put out some great music?'” After Newman approached Seay, they realized it was the perfect project for the Drexel students learning the ins-and-outs of the music industry. 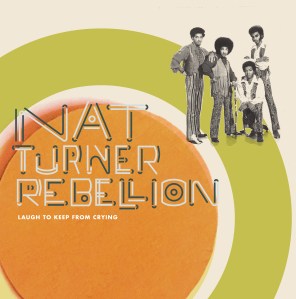 “We were really feeling like it should be a vinyl release, that is where it should live, but we’re an independent label out of a university. We don’t have the funds to start pressing vinyl,” Offenbach says. “On the business and marketing side, I got the students involved and we contacted Vinyl Me, Please. Once Toby assembled the music, I sent it to them, thinking they would flip out, and they did flip out … It was kind of kismet for us.”

The students then teamed with Vinyl Me, Please to work everything from the marketing plan to the release’s artwork. Offenbach even recruited Drexel students to track down rights holders and publishers to get mechanical licenses for the songs on the album.

In 2012, Reservoir acquired the publishing and master rights to the Philly Groove catalog, with Reservoir’s SVP of A&R and Catalog Development Faith Newman working in tandem with Seay and Offenbach to make the project a reality; Newman also secured Jefferson’s permission to release the songs.

“While these recordings capture a significant moment in history, they are just as relevant and powerful now as when they were originally recorded,” Newman said. “We are grateful to Drexel and MAD Dragon for their partnership in helping these recordings see the light of day in Joe Jefferson’s lifetime and honored that he entrusted us with preserving the legacy of the project.”

Vinyl Me, Please will begin offering Laugh to Keep From Crying through their vinyl subscription service beginning March 28th, with the 12-track LP accompanied by a seven-inch single boasting two additional tracks, “Right On We’re Back” and “Ruby Lee.” Reservoir will handle the digital release of the Nat Turner Rebellion tracks on streaming services beginning March 29th.

Drexel University will also hold a public event on May 1st to celebrate the Nat Turner Rebellion and the Sigma Sound collection.

While Laugh to Keep From Crying marks MAD Dragon’s first archival release, the label is hopeful to excavate more forgotten and unheard classics from the Sigma Sound collection; however, due to rights issues, releases for many of the collection’s higher profile recordings – like the rumored Young Americans outtakes from David Bowie’s sessions at the Philadelphia studio – will remain in the archives.

Regardless of future releases, Offenbach says the students’ involvement has been worth the effort. “It’s been a great exercise,” he says of the album. “[My students and I] talk about it in our publishing class; we have copyright classes. So on the academic side, it’s really incredible.”