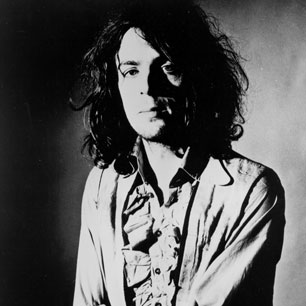 Buried in the tiny black-on-purple print on the back cover of An Introduction to Syd Barrett (Capitol) — a new anthology of Syd Barrett‘s short lifetime on record, as the founding guitarist in Pink Floyd and an acid-damaged solo artist — is an offer you cannot resist: a bonus download of a previously unreleased track from the protracted and chaotic sessions for Barrett’s 1970 album, The Madcap Laughs.

Don’t get too excited: “Rhamadan” is a 20-minute instrumental with no discernible melody or structure, just the sound of Barrett apparently soloing with himself on various overdubbed instruments. The only other player, on congas, is — according to some accounts and a suggestion at the official Syd Barrett website — Steve Peregrine Took, Marc Bolan’s percussionist in the original acoustic Tyrannosaurus Rex. The only vocal on the track is an engineer calling out “‘Rhamadan,’ take one!'” One, it seems, was plenty.

The Madcap Jams
The best things about “Rhamadan”: It’s free, with purchase of the album. And it is a glimpse of an abandoned path on the way to The Madcap Laughs: the long delirious spells of improvisation that were the early Floyd’s specialty in performance and best preserved on record in “Interstellar Overdrive,” the Side Two beast on 1967’s The Piper at the Gates of Dawn. Barrett was already coming apart at the seams during the Madcap sessions. “Dark Globe,” featured on Introduction (it was produced by Floyd bassist Roger Waters with Barrett’s replacement, David Gilmour, on guitar), is a raw wound of erratic strumming and helpless braying: “Please lift a hand/I’m only a person/With Eskimo chain/I tattooed my brain all the way.”

But for all of its disconnected noodling, “Rhamadan” has a weird kind of joy about it, as if Barrett had briefly rediscovered the pleasure of pure playing. If nothing else, the song moves. (Note the motorcycle sound effect — a bike pealing out from left speaker to right — at about the seven-minute mark.) A bass guitar constantly solos over varying but relatively sturdy drum and conga patterns. Guitar, piano and organ skitter and jabber to no particular purpose but with more spirit and engagement than you expect. You wish for the Floyd’s furious free-rock interaction in the middle of Piper‘s “Pow. R. Toch,” but even they, with Gilmour, had settled into a more pensive, floating, chance music by that time.

“Rhamadan” adds little to what we know, or likely ever will, about Barrett’s mental dissolution and determined self-exile until his death in 2006. Strangely, what Introduction does not tell you anywhere in the packaging — despite a stellar track selection and Gilmour’s input in new mixes of songs such as “Octopus,” “Dominoes” and Barrett’s last single with the Floyd, 1967’s “Apples and Oranges” — is original release dates and the albums on which the songs first appeared.

It is a curious omission for such an obvious labor of love. Frankly, it’s not that hard to collect the entire essential Barrett: Piper, Madcap and Barrett, also released in ’70 and his final formal word to the world. And you should. But as an incentive for completists and a treat for novices, “Rhamadan” is a nice bit of Christmas come early. It is not a revelation. But it’s good to have — a last piece, it appears, of the madcap laughing.