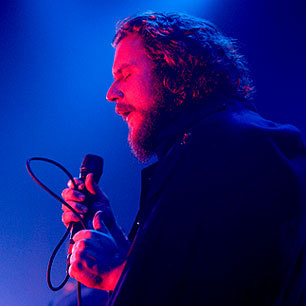 There are two ways to do a classic studio record in concert: Exactly as it was made, original nuances intact; or as fresh meat, the way the songs would get cut now, with evolved powers and lessons learned. My Morning Jacket found a third way during their gutsy complete-catalog stand last week at New York’s Terminal Five. Singer-guitarist Jim James, bassist Tom Blankenship, guitarist Carl Broemel, keyboard player Bo Koster and drummer Patrick Hallahan performed every MMJ studio album to date — one a night, plus long second sets with period-appropriate rarities and covers — with grateful ecstasy, recalling each step and stumble forward in their first decade with fierce delight and humbled shock.
The disbelief came early. “This is such a psychedelic experience for us,” James told the crowd on opening night, October 18th, as he and the band stepped way back to the country galactica of 1999’s The Tennessee Fire, transforming most of it with the epic-Seventies boom and acid-laced guitar hysterics of 2003’s It Still Moves. By the closing half of October 23rd, devoted to 2008’s Evil Urges, James was delirious with thanks: singing a new ballad, “Wonderful (The Way I Feel),” with stunned joy through long watery reverb; then falling on his back during “One Big Holiday” from It Still Moves — the only song repeated during the whole residency — and kicking his legs in the air like AC/DC’s Angus Young. It was the perfect punctuation to a week about growing up on record without going soft or cold.
See photos from My Morning Jacket’s NYC shows
Fire, Fuzz and Party Time
I missed the October 19th show, which featured 2001’s At Dawn. I was at the Elton John-Leon Russell concert at the Beacon; it’s that kind of town, this time of year. But I caught the most extreme treatment of a record on that first night. And on the third, October 21st, I saw My Morning Jacket revisit It Still Moves, their breakthrough album, with supercharged swagger, like they were playing nothing but greatest hits. Which they were, judging by the lusty audience sing-along in “Mahgeetah” and the euphoric reception for “Golden.”
James and Blankenship are the only surviving members of the lineup that made The Tennessee Fire, although guitarist Johnny Quaid, who left in 2004, returned to help out on several songs. That album was literally homemade, recorded by James on DAT cassette with a band that had barely played live. The one that performed the album laid on the distortion, added even more echo and stretched the fifteen songs out to 90 minutes, exulting in false endings and exploding codas. Hallahan kept up a steady John Bonham-like earthquake under “Heartbreakin’ Man”; “Evelyn Is Not Real” got a triple-guitar, Yardbirds-style makeover in the middle. “If All Else Fails” was a tune never before performed in concert. Here, with James on acoustic guitar, his high croon thickened with reverb, it sounded like his first truly great song, with hook power and gritty dignity — a strong promise of future grandeur.
See My Morning Jacket at Levon Helm’s Midnight Ramble
My Morning Jacket still play so much of It Still Moves live that the Terminal 5 recital should have felt like automatic pilot. Instead, they returned to these songs with the same excited ambition with which they recorded them: blowing up the chug and clang in “Mahgeetah” with an unashamed boogie climax and taking “Steam Engine” out, way out, for 20 minutes, James milking long wounded-elephant groans from his guitar like the electric Neil Young on Weld. When it came to the covers, Bob Dylan’s “Tonight I’ll Be Staying Here With You” got the same brusque affection. And when James segued out of “Head Held High” by the Velvet Underground and the Band’s “It Makes No Difference” into the mirror-ball gallop of Lionel Ritchie’s “All Night Long,” that wasn’t modern-rock irony — just pure bliss.
Into the Big Time
The striking thing about hearing My Morning Jacket play 2005’s Z all the way through was how restless they sounded from song to song, as if they were impatient to move on from the alternative-Skynyrd comparisons (mine included) laid on It Still Moves and keen to pursue all of the options. The show opened with a swerve: from the funky step and Queen-like hallelujah of “Wordless Chorus” into the crisp restrained pop of “It Beats 4 U” and “Gideon”. Already eight minutes long on the record, James’ requiem for a late friend, “Dondante,” was given the Pink Floyd overhaul, distended Meddle-style with James’ sighing vocals hanging over the throb like David Gilmour’s languid-Strat lines. The shuffle-mode dynamics carried over to the second set. A string of slow floating ballads was finally disrupted by Funkadelic’s “Hit It and Quit It” and a full fantastic version of the Who’s 1966 mini-opera “A Quick One, While He’s Away,” allowing Hallahan to unleash his inner Keith Moon and Broemel to enjoy a couple of Pete Townshend right-arm windmills.
Photos: The hottest live shots of the week
Evil Urges is still too new and familiar to pack radical surprises. Live, it was a strong varied program of fan favorites — the slinky bedroom creep of “Evil Urges,” the double-edged crunch of “Highly Suspicious,” the tender candor of “Librarian” — played with two years of tour-bus experience and undiminished pleasure. That is not faint praise. “Smokin’ From Shootin'” was one of the best blasts of the entire run, pop with mettle, showing how My Morning Jacket have grown in ambition and confidence without losing their grip on grit.
After a magnificent extension of the Velvets’ “Oh! Sweet Nuthin'”, James led the band and their guest horn section back into the funk, finishing a hat trick of R&B covers with Curtis Mayfield’s “Move On Up,” a song that sounded more like a pledge than a command. Over five nights and 99 different songs, My Morning Jacket took stock of their still-young career, never running out of steam or rapture. Their next decade is off to the right start.