When he returned to the stage for an encore on Saturday night, Marcus Mumford smiled, wiped the sweat from his brow and then, if only for a brief moment, stared out in amazement at the thousands still occupying Hutchinson Field at the south end of Chicago’s Grant Park. The fans were there for his band, Mumford & Sons, and also eager to be a part of history as one of the decade’s most successful bands headlined Lollapalooza for the first time. “We’re so grateful to you, Lollapalooza,” Mumford professed, before easing into “Lovers’ Eyes,” a soothing hymnal off the London foursome’s Grammy-winning second album, Babel. “You really have been one of the most gracious crowds we’ve ever played to,” he added.

It was not the first time the folk-rockers played Lollapalooza: In 2010, Mumford & Sons, which includes keyboardist Ben Lovett, banjoist Winston Marshall and bassist Ted Dwane, were fresh off the success of their debut album, Sigh No More; they played a 12-song set with the sun still shining in the late-afternoon sky. But Saturday’s gig was of a completely different scale. In just under two hours, the Americana-influenced outfit, now with Dwane healthy again after a successful brain surgery that forced the band to cancel a Bonnaroo gig (“Ted’s alive! Yes!” Mumford joked), strummed, plucked and elegantly harmonized their way through 18 choice cuts. Mumford pulled double-duty on standout “Lover of the Light,” beginning the Babel rocker armed with his trusty Martin D-28 acoustic guitar, before hopping up onto the drum riser and finishing the song slapping the skins behind the kit as coincidental fireworks exploded in the distance.

At times the band, aided by a three-piece horn section and fiddler Ross Holmes, lost steam, particularly during a string of down-tempo tunes (“Thistle and Weeds,” “Hopeless Wanderer”). But memorable moments came aplenty. During the encore, the foursome crowded around a single mike for a spare, intimate cover of Bruce Springsteen‘s 1985 hit “I’m On Fire,” which Mumford characterized as “the quietest song you’ll hear all weekend.” As is always the case, crowd sing-alongs during outsize anthems “The Cave,” “I Will Wait” and “Little Lion Man” added a much-appreciated shot of adrenaline into the set.

Energy was one thing Kendrick Lamar did not lack. “You can’t classify what we got going on,” Lamar told his adoring fans halfway through his hour-long set Saturday evening at the massive Bud Light stage on the park’s northernmost end. “This is life!”

The past year for Lamar has been a supremely successful one. His debut album, 2012’s introspective, hard-hitting good kid, m.A.A.d city, transformed the Compton-bred rapper from Dr. Dre‘s much-hyped protégé – albeit one with a super-promising mixtape in 2011’s Section.80 – to a bona fide hip-hop star, and the go-to dude for guest verses on other rapper’s tracks. 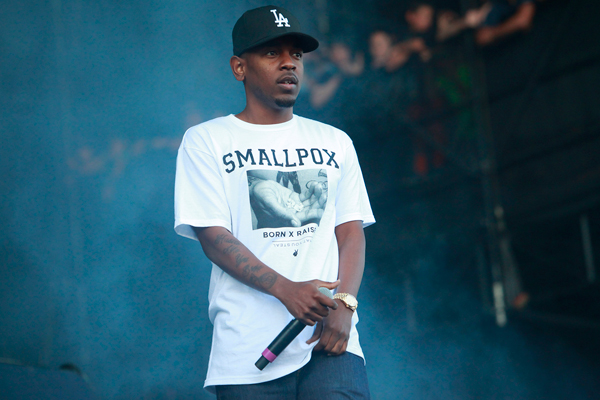 In concert, Lamar is an engaging presence: The MC, wearing a LA Dodgers baseball hat and a BornxRaised t-shirt emblazoned with the words “SMALLPOX,” required no hype-man to amp up the main-stage crowd. (He did though have a killer three-piece crack band comprised of a DJ, drummer and bassist). On wax, Lamar’s more narrative-driven tracks like “The Art of Peer Pressure” are exquisite, thanks in large part to the 26-year-old’s pristine storytelling talent. Still, it was not surprising that his bangers – particularly “Bitch, Don’t Kill My Vibe” and his Dre collaboration “The Recipe” – were most effective at Lolla. As for his notable lyrical dexterity? At times the MC fell out of the pocket, most notably on “Poetic Justice,” then was forced to fight his way back into the groove.

Hours earlier, on the same stage where Lamar spit lyrical fire, UK synth-pop siren Ellie Goulding’s brain was trying to process exactly what her eyes were seeing. “There’s so many people!” she said, staring out at an utterly packed main-stage lawn for her afternoon set. “I always think there’s gonna be like no one here.”

The singer was being modest: thanks to her breakout debut album, 2011’s Lights, then followed up by last year’s winning Halcyon, Goulding is now a global star. Her appeal lies in her innate ability to switch gears, from a wispy-voiced chanteuse to a rock singer who happens to be armed with electronic accompaniment. On Saturday, Goulding was a multi-dimensional threat: a head thrashing, pogoing dervish of manic energy and equal-parts tender crooner. There she was, at the outset of her show, stage-center, laying down a martial drum beat and belting out “I’m more alive than I’ve ever been” during Halcyon‘s “Don’t Say A Word.” Moments later, Goulding was clouded in smoke and bathed in the twinkling piano of Light’s “Animal.” The singer made sure to capitalize on the massive Lollapalooza look: She unleashed a pair of newer EDM-influenced tracks, her own “Burn” and her Calvin Harris collaborative single “Need Your Love.”

Eric Church was still nursing a wicked hangover when he took the stage during the late-afternoon heat. The previous night the country outlaw played a late-night show at the Metro, one he told Rolling Stone backstage was a welcome return to the more-intimate shows on which he first cut his teeth. But Church, who broke big in 2011 with his fiery and fabulous LP, Chief, is nothing if not a creature of habit. As he does for every show, the singer was nursing a cup on Saturday filled with his trademark single-barrel Jack Daniels. “This cup kicked my ass last night,” he admitted to the crowd before launching appropriately into his ode to alcohol’s devilish appeal, “Jack Daniels.” 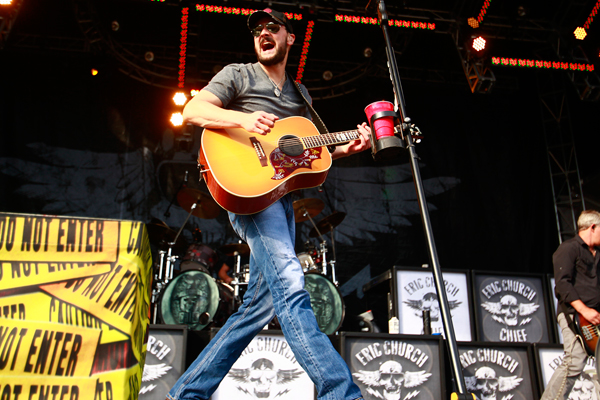 Church is a welcome shot in the arm of conservative country norms. On Saturday, the baseball-cap-and-shades-wearing North Carolinian made no secret of his love of the sweet leaf (“I’m Getting Stoned,” “Smoke A Little Smoke”) and his soft spot for bad girls (“Keep On”). His succinct songwriting makes him all the more dangerously talented.

For the country star, pushing the lyrical envelope is not only pleasurable to him; he also feels that’s his obligation. “That’s where the best music lives,” he says. “There’s too many rules on music. I mean, how do you put rules on music?”