There was something poignant about MTV’s big question this year: How the hell can we keep people from noticing the Video Music Awards? Bump it to a Monday night in August? Not enough. Give Jennifer Lopez a lifetime achievement award for her singing? Not enough. Make Aerosmith jam with Post Malone? Allow DJ Khaled near a mic? Getting warmer, but not quite. Most years the VMAs bash is a surreal tour of pop culture’s dizzy highs and comic lows. But last night was pretty far from any kind of show. No stars. No fun. Pure flop sweat. The VMAs’ ratings have slipped violently in the past few years, and there are plenty of theories why, but MTV’s disdainful distance from music culture these days makes it the wrong network to be throwing itself a party. And wow, this really just isn’t a show. It felt barely noticed even by those who bothered to tune in.

The VMAs’ peak thrill came from Madonna’s beyond-awkward Aretha Franklin tribute, clearly planned as a Madonna 60th birthday tribute, which Madonna clearly still wanted it to be. Ms. Ciccone looked fine in her vintage New Wave love beads, dressed exactly like Lene Lovich circa “New Toy.” Then she told a rambling story about how she once sang “(You Make Me Feel Like a) Natural Woman” at an audition. Since the story was about Madonna, not Aretha, it felt forced when she added, “None of this would have happened, could have happened, without Our Lady of Soul.” Happy birthday, Madonna, and thanks for “Dress You Up,” but this was a disastrous mistake, on a night that felt like a bouquet of them.

No Drake, no Bey and Jay, no Tay, no Adele, no Rihanna. No Kendrick or Childish Gambino or Lorde or Cher. No Nick and Priyanka. Instead, this year’s VMA ceremony was full of existential questions. Like: Has anyone ever sucked at anything like DJ Khaled? What precisely does he suck at? What measure of entertainment is he trying and failing to reach? What would a “successful” DJ Khaled endeavor resemble? Will we ever know how his music sounds in his dreams, or will we merely continue to behold the awe-inspiring shitness of his award-show cameos? If you were imprisoned in a cave in which music was unknown, and the only sound was the whisper of winter winds as the dust rustles against the bare stone walls, would DJ Khaled grunting “standing ovaaation!” compute as some sort of pleasurable respite from the emptiness? Or is it possible that the death rattle of the wind would be Side Two of Spirit in the Dark by comparison?

Camila Cabello won Video of the Year for “Havana,” deserving a kickier victory party for the historic year she’s had. (Dedicating her award to Madonna was a realer and sweeter tribute than Madonna’s to Aretha.) Ariana Grande staged a Last Supper tableau for “God Is a Woman,” starring herself as Jesus, another step into the Madonna groove. It worked, since we’re all still reeling from the excellence of Sweetener, which is Camila’s main competition for pop album of the year so far. Tiffany Haddish shaded Camila by saying, “Hi, Fifth Harmony.”

The great Hayley Kiyoko got to yell “20-Gay-Teen!” and perform a snippet of “Curious,” the song she dueted onstage with Taylor Swift a few weeks ago — you’d think MTV would be so grateful to have a pair of firecrackers like Hayley and Camila in the house, they’d set them loose to make some mischief, but no such luck. Cardi B began the show with a little stand-up, although nowhere near as hilarious she was last year on the red carpet, chatting up stars and doing “Bodak Yellow.”

Jennifer Lopez won the Video Vanguard award, making you wonder if MTV has any idea Lopez makes actual films, the kind where she doesn’t try to sing. (Have you seen Out of Sight lately? Or U-Turn? Or The Boy Next Door? This is a movie star, for real.) Since her music-video work is considerably less resonant or influential than her fragrances (JLuxe, breathe it in) it was sad to see her frolic with Ja Rule on “I’m Real,” trying to pimp a golden age that never was. Then they got clowned offstage by DJ Khaled. In case you’re keeping score, her proudest VMAs moment is still Chris Rock in 1999 saying, “I love you Jennifer — where you at, girl? You don’t thank your ass enough. She be thanking her mommy and daddy, the acting coach. Thank your ass, girl! Thank your ass before the ass go solo. The ass is the star of the show. Jennifer’s just the Commodores — the ass is Lionel Richie.” Number two: Jennifer storming out mid-show after Triumph the Insult Comic Dog begged to sniff her butt.

Taylor Swift made her annual refusal to even set foot in the same area code as MTV’s quagmire, a tactically brilliant move that’s turned into a Tay tradition — though the absence of her star power is an undeniable part of why this show has felt so small-time the last few go-rounds. Nicki Minaj performed, mostly to express her pique that Queen fell victim to Aretha calling her bluff. (See the glory of the royal scam, indeed.) Minaj did a medley of Queen tracks, with bonus points for not burdening “Majesty” with Eminem. Travis Scott, whose success has been giving Minaj some well-publicized heartburn lately, did a duet with James Blake and offered a touchingly modest and sincere R.I.P. to Aretha. Kevin Hart has earned his own lifetime achievement statuette as the smarmiest award-show pest of our time — making Tiffany Haddish stand next to him was a hate crime. 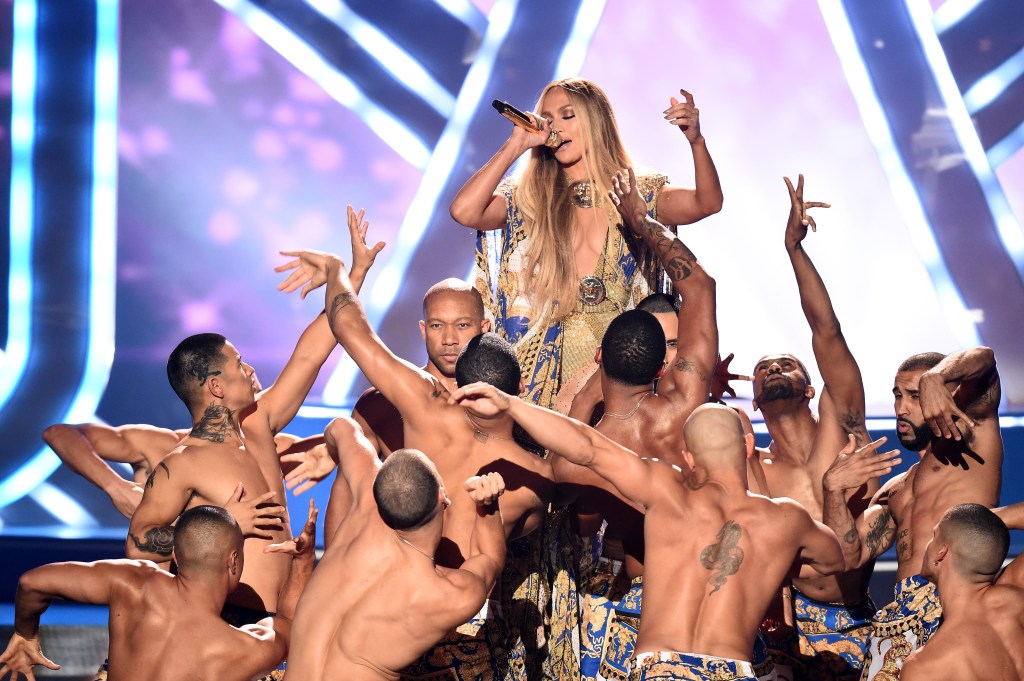 MTV, always keen to use the VMAs as a platform to announce their bold and innovative new ideas, unveiled the latest master plan…a reboot of The Hills. (Ideas, baby!) Anything that brings Justin Bobby back to TV is a worthy premise, but no L.C.? In the immortal words of Audrina, this is crazy how all this is happening while Lauren is gone.

The annual token-rock-band slot that normally goes to 21 Temple Pilots or Imagine There’s No Dragons or 21 Savage Dragons Who Imagine 5 Seconds to Mars? This year it went to Panic! At the Disco, who kicked ass with “High Hopes,” their first VMAs shot since the Closing a Goddamn Door era. And for the grand finale, Aerosmith got joined by Post Malone (whose name at least rhymes with “Alicia Silverstone”) and 21 Savage for “Dream On” and “Toys in the Attic.” It was a tribute to the 25th anniversary of their Alicia Trilogy videos — and in a slog like tonight, that could pass for a highlight.

Nobody sang any Aretha songs, not even with five days’ notice. (Aretha, of course, sang the Puccini aria “Nessun Dorma” at the Grammys when Pavarotti got sick, with 20 minutes’ warning.) The whole night had a sour given-up-on vibe from start to finish, right up to “Respect” cynically slapped over the closing credits. In such a vibrant year for pop music, it felt strange to see MTV blow off their annual grudging recognition that music exists in the present; it felt even stranger to see them bumble the past. As Aretha would have spelled it: R-E-S-P-E-C-Zzzzzz.