MTV may have mostly given up on music years ago, but it did not skimp on this year’s Video Music Awards. This year, the channel went all out with a rainstorm over Shawn Mendes, fire for Aerosmith and a movable 6 train for Jennifer Lopez to ride in on. There’s a lot that goes into making an awards show look perfect (or nearly perfect) on TV, which means there were a lot of things going on behind the scenes – such as a British voice yelling “applause, applause, applause” into the PA before Jimmy Fallon’s appearance – just to get it to that point. Here are nine things that happened at New York City’s Radio City Music Hall Monday night that you missed by watching it at home.

1. A raunchy standup comedy set.
About 10 minutes before the show started, MTV sent out a standup comic who spent most of his time grotesquely critiquing people’s bodies like a seventh grader nobody will sit with at lunch. Most of the time they weren’t even jokes: “Cleavage – big fan.” “Nicki Minaj, she has a hell of a body.” “Hello, sir. You look great. If I was gay, I’d be all over you.” “Anybody have pubic hair?” Maybe if the VMAs had a white rose initiative, like the Grammys, this wouldn’t have been a problem.

2. Nicki Minaj’s dirty word.
Much like the opening standup, the self-proclaimed rap “Queen” must have recently been brushing up on her George Carlin. At the end of her acceptance speech for Best Hip-Hop, she plugged her Apple Music Beats 1 radio show with one of the seven dirty words you can’t say on TV: “Tune in to Queen Radio just so you know who the Cocksucker of the Day award is going to. Love youuuu.” No matter who it is she’s beefing with, Beats 1 won’t air that word just like MTV didn’t.

3. The comically long drinks line.
If it looked like the seats were empty during the performance, it’s not because the audience had peaced out midway through – it’s because they were more interested in the free drinks and popcorn given out in Radio City Music Hall’s lobby. At one point, just before Minaj’s piped-in performance, the drinks line on the second mezzanine was about 30 – 40 people deep. (Rolling Stone didn’t have time to wait during the commercial break, so we stuck to water, thank you.)

4. Minaj’s absentee audience.
Although the rapper was in the building, she did not perform on the VMAs stage. Nevertheless, the show’s producers ran the footage of her performance in the broadcast at live-concert volume with booming bass. The downside, though, was that they also cranked the fans screaming in the footage and it was nearly deafening. This didn’t stop Radio City’s real audience from applauding when it was done, though.

5. The fate of Jennifer Lopez’s hat.
At the beginning of “Dinero,” she tossed her gold-sequined ballcap at the camera. It flew off camera and landed on the floor – right next to her boyfriend, former New York Yankee Alex Rodriguez, who gingerly picked it up. Shouldn’t he have caught it?

6. DJ Marshmello’s commitment to character.
During the commercial breaks, most of the celebrities whipped out their phones and texted, tweeted or gazed lovingly at themselves with their cameras. This was no exception for chronically behelmeted DJ Marshmello, who read his phone through his headpiece. Whatever it was he was reading kept the cartoonish smile on his face. 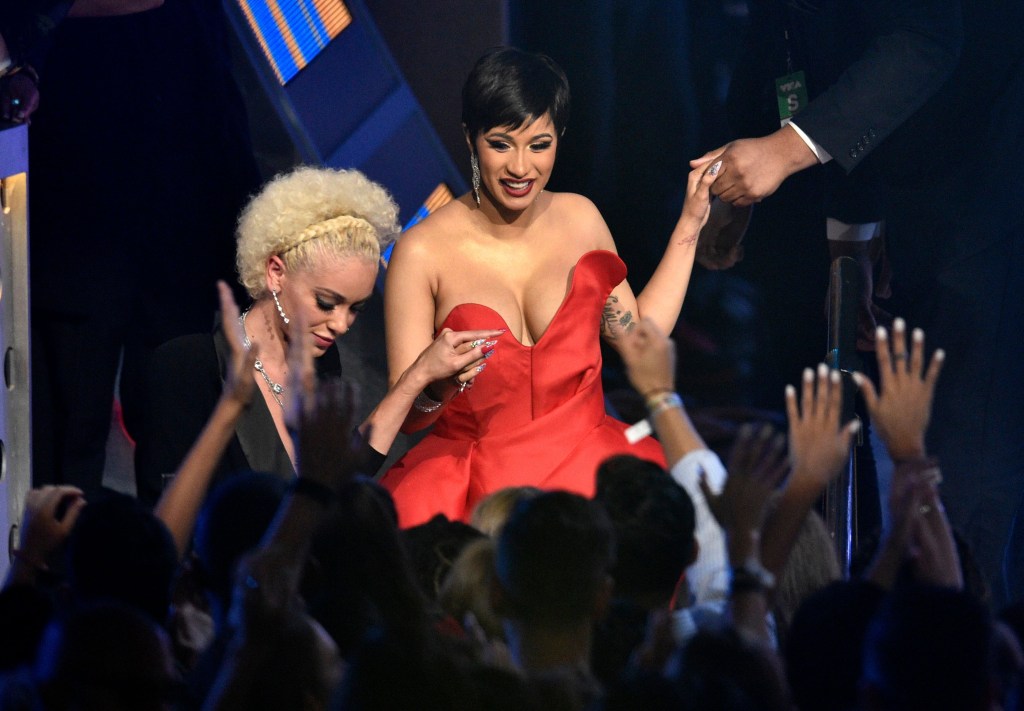 7. Cardi B needed a little help from her friends.
When the rapper won Best New Artist, she had to go over the river and through the woods to accept her Moonman. She was wearing a rather wide red dress and, we assume, blood shoes. So as she left her seat and walked over to the catwalk, only to have to ascend it and then climb back down it, she had assistance from two or three handlers on either side. When she accepted the Best Collaboration award later, alongside J.Lo and DJ Khaled, she’d made a costume change.

8. Ariana Grande’s performance was truly made for TV.
The closeups on the rows of women swaying between Roman columns in Ariana Grande’s performance were fascinating on the small screen, but it didn’t translate well to the stage. From the second mezzanine, it looked almost like a military drill with people moving in unison in straight lines. That may be why the response was slightly anemic. God is a woman, but she may not be a live-event producer.

9. Steven Tyler’s Irish goodbye.
After Aerosmith’s fiery performance with Post Malone, the goodbye was short and not so sweet. Tyler eyed his bodyguards who helped him over the catwalk and through the audience for a quick goodbye, while his bandmates and Post Malone waved at the crowd and ambled their way to the back for an easy exit. Maybe Tyler just wanted some extra time to rest up before the group’s Las Vegas residency in the spring or maybe he just wanted to get out of there while the flames were still burning on the guitar amps behind him.