They walked onstage to a subtle jolt of dry wit. The intro music for the Moving Sidewalks‘ first show in 44 years, on Saturday at B.B. King’s Blues Club and Grill in New York, was Bo Diddley’s 1959 single “Crackin’ Up.” But the Houston, Texas-born psychedelic-garage band – best known for most of that interval as guitarist Billy Gibbons‘ first stab at the big time before starting ZZ Top – looked sturdy and sounded fit for resurrection the night before Easter. “Well, it’s true – we’re back,” Gibbons announced in a cheerful growl, through his epic sandy-red beard, before he and the rest of the Sidewalks – bassist Don Summers, drummer Dan Mitchell and organist Tom Moore – warmed up with a meaty instrumental shuffle, “On the Green.”

The acid reflex kicked in immediately, with Gibbons lacing his muddied-fuzz solo with modal flourishes and cutting sustain. The Sidewalks then swung back to their small but hip recorded legacy, recently anthologized in the deluxe two-CD box The Complete Collection (Rock Beat). The band reprised more than half of its lone 1968 LP, Flash, including the long “Joe Blues,” the trippy ballad “You Don’t Know This Life” and a heavy, spaced-rock cover, “No Good to Cry,” originally written by NRBQ guitarist Al Anderson for his own Sixties combo, the Wildweeds. The Sidewalks also played all three of their legendary A-sides – “99th Floor,” “Need Me” and the Lone Star-Vanilla Fudge wrangling of the Beatles‘ “I Want to Hold Your Hand” – with extra, bluesy beef in Gibbons’ riffing and Mitchell’s drumming and vintage, whirling scoops of Moore’s B-3.

Instead of just revving up the discography, Gibbons led the Sidewalks down detours from memory lane. He reminisced about the Sidewalks’ spell as housemates with fellow Texas heads the 13th Floor Elevators before pulling the trigger on a hard, heated version of that band’s “Reverberation.” There was a running joke, too, about Elevators singer and bent mind Roky Erickson and his choice of beverage then: Listerine.

Gibbons spent much of the set honoring his most important teacher during the Sidewalks’ first lifetime, Jimi Hendrix. “There was a guy who plucked us out of where we were,” Gibbons said, “and took us all around the planet,” a reference to both the Sidewalks’ opening sets on tour with Hendrix in early 1968 and that guitarist’s friendship and mentoring offstage. The Sidewalks then covered Hendrix’s “Foxey Lady” and “Red House,” one right after the other. Summers played impressively deep, unshakeable bass on the latter, while Gibbons, in a closing version of the Troggs’ “Wild Thing,” quoted Hendrix’s custom work on that song, including the phrase from Frank Sinatra’s “Strangers in the Night” that Hendrix slipped in at the Monterey Pop Festival. 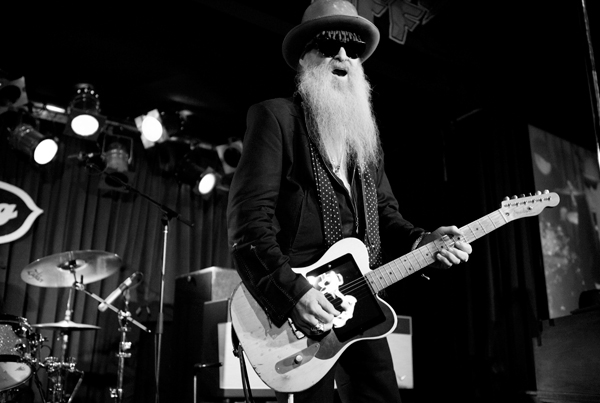 There was more Hendrix in the encore, a medley of “Catfish Blues” and “If 6 Was 9,” before the garage-rock collectors in the packed, delighted audience got “99th Floor” and that Beatles freakout. One woman near the stage brought a vinyl copy of Flash which she handed to Gibbons, hoping for an autograph. He briefly stopped the show, then passed the LP around for everyone in the band to sign, then held a mock auction – “I’ll start the bidding at $150, do I hear $175?” – before giving it back.

It was a mark of how much time had passed, on a night where nothing much seemed different except for some white hair and waistlines. “We wrote this in 1968? We were zero years old,” Gibbons cracked at one point, introducing one of the Sidewalks’ old songs. In fact, he and the Sidewalks walked back into light like they weren’t a day over ’69, the year they broke up and Gibbons hit his own Texas paydirt.

The Moving Sidewalks will reunite again on April 28th, headlining the Austin Psych Fest in Austin, Texas, where they are sharing the bill with Erickson and spiritual descendants including the Black Angels, Black Rebel Motorcycle Club and the Raveonettes.

After that, let there be more. This is a trip that’s just getting started again.