Morrissey doesn’t need your help. “It’s my life to wreck my own way,” he crooned languidly on “Alma Matters,” two songs into the kickoff date of his latest American tour at the gilded, palatial Wang Theatre in Boston on Friday.

Contrary to that sentiment, however, the notorious malcontent seemed exceptionally at ease, both with himself and his audience. Over the course of a tidy, 100-minute set that featured 20 songs – five by his former (and evidently never-to-be-again) band, the Smiths – he teased his enraptured fans, whipped up dust devils with his microphone cord, pounded percussion on his chest as if to soothe his heart palpitations, lay down fetally in the spotlight and otherwise thoroughly entertained himself at the lip of the stage, where he was so clearly born to live out his years.

“Because I’m in Mass.,” he said coquettishly after that second song, “would you like me to kneel?” But it was the crowd that was in the mood for worship, standing and fist-pumping throughout the show despite the posh setting and singing along (to the Smiths songs in particular) with such gusto that the singer was often able to save his ample lungs.

The stage was set with a long montage of vintage, campy film clips, ranging from footage of Fabian inciting a huge scrum of sobbing women by growling like a tiger to an old episode of The Untouchables in which Eliot Ness’ men surround the house of a certain Morrissey. 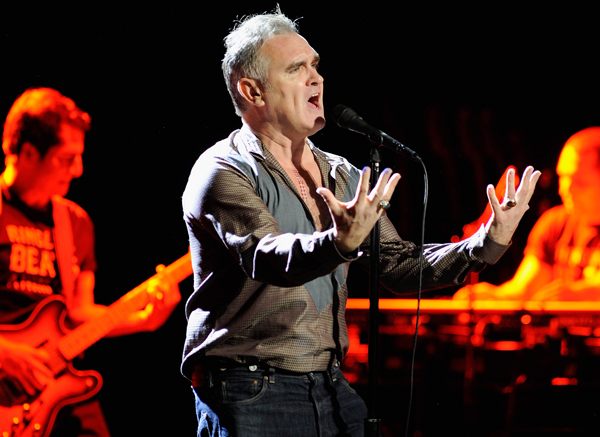 Yet the man of the hour, when he emerged, seemed much lighter than grim. Under projected images (including one of Oscar Wilde asking “Who is Morrissey?”), he shook a pair of maracas with one hand during “You’re the One for Me, Fatty” and lost himself in the childlike “la, la-la”s of “Spring-Heeled Jim.” Later, he sated his appetite for over-the-top dramatics with a soaring cover of the forgotten Frankie Valli show-stopper, “To Give (The Reason I Live).”

Not for the last time of the night, “Maladjusted” underscored just how much eerie psychedelia Morrissey’s band can often muster beneath the frontman’s sui generis vocal style. The Smiths’ “Meat Is Murder” came across like an especially bad trip, with Burulcich pounding mallets on a huge kettle drum and Tobias’ guitar mewling like animals in the slaughterhouse while gruesome bits of PETA’s anti-carnivore film “Meet Your Meat” screened overhead.

Again, however, he showed little actual sign of despair, indulging his audience as they sang along to the suicidally bereft “I Know It’s Over”: “See the sea wants to take me, the knife wants to slit me. . . .” It was, oddly, a joyous exercise in group therapy.

“Should’ve ran while you had the chance,” Morrissey joked when he returned for the single-song encore – after changing drenched shirts for a second time. Fans only needed to hear the first flanging effects to recognize the Smiths classic “How Soon Is Now?” which Morrissey barely bothered to sing over his enthusiastic supporters. He coyly summoned a few fans to rush onstage for brief hugs, then hid behind security guards when the well-wishers predictably grew a bit too eager. He heaved a bouquet of roses out into the crowd, tore off his shirt and slung that too, jogging off into the wings triumphantly while the band throbbed its last heartbeats.

“You Have Killed Me”
“Alma Matters”
“You’re the One for Me, Fatty”
“A Rush and a Push and the Land Is Ours”
“I’m Throwing My Arms Around Paris”
“Ouija Board, Ouija Board”
“Every Day Is Like Sunday”
“Spring-Heeled Jim”
“Maladjusted”
“Let Me Kiss You”
“To Give (The Reason I Live)” (Frankie Valli cover)
“Speedway”
“Last Night I Dreamt That Somebody Loved Me”
“Fantastic Bird”
“People Are the Same Everywhere”
“Meat Is Murder”
“Scandinavia”
“I Know It’s Over”
“I’m OK By Myself”
“How Soon Is Now?” (encore) 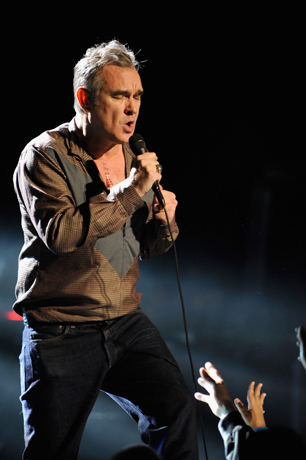