Inside the Oldest, Most Exclusive Dance Party in the World - Rolling Stone
×

High in the southern Rif mountains of northern Morocco, just before midnight, a buzz begins to radiate through the groups of sprawled attendees decked out in colorful robes, hippie skirts and flowing Western clothes. Wordlessly we edge up from supine to seated, and rearrange ourselves in casual semicircles, all eyes on the 13 men in ceremonial brown djellabas parading up the front of the stage, which is to say the carpeted chill-out area of a three-sided tent done up in red and green tribal fabric.

Horn squeals and drum taps puncture the silence, come faster and gradually knit into melody and rhythm. A yowl of high-pitched ghaita horns pierces the air, reverberating from every direction, despite the lack of walls. Five different kinds of drums thunder into a rhythm, then syncopate and alternate, creating layers of polyrhythms.

Almost involuntarily, people make their way to their feet and begin dancing to the pounding drums, the energy among the audience escalating until it’s reached the same fever pitch as the players’. And just when it seems like the music is reaching a climax, rhythms change, horns shift gears and the tsunami of sound starts to recede and slowly build all over again.

Brian Jones: Sympathy for the Devil

This continues for a couple hours, until just like that, the music stops. Dancers inch their way to their spots on the carpet as the musicians, still glued to their chairs, ritualistically refill their spindly wooden Sebsi pipes and smile beatifically at one other and at the audience, who are flashing Cheshire cat grins right back at them.

Welcome to the eighth annual Master Musicians of Joujouka “micro” music festival; held in the stunningly isolated Ahl Srif region of Morocco’s Rif Mountains, it has become a destination event for impassioned fans around the globe. Each year, a growing number of musicians, world-music devotees and the curious stumble upon this tiny gathering (ticket sales are strictly limited to 50), many returning annually. They come to watch and dance to the village’s 15 or 20 master (or malikim in Arabic) musicians performing the tribe’s traditional music.

In the early 1950s, the Masters were renowned in their tribal region, but not much beyond. All that changed when writer Paul Bowles and Canadian artist Brion Gysin, based in the expat mecca of Tangier, stumbled upon the MMJ at a Sufi festival, fell in love with the music and befriended the Masters through their painter friend Mohamed Hamri, who had familial ties to Joukouka.

By making the MMJ the house band at their Tangier restaurant, Gysin and Hamri introduced them to the likes of Timothy Leary, William Burroughs and other American beats, as well as the Rolling Stones, which then included guitarist Brian Jones. Jones, instantly enamored, went on to produce their first album, Brian Jones Presents the Pipes of Pan, just before his death in 1969. Depending which source you believe, either Leary or Burroughs dubbed the MMJ “a 4,000-year-old rock & roll band.”

Shortly after that, jazz saxophonist Ornette Coleman arrived to record with the Masters. In the 1980s, they played at England’s Glastonbury Festival and elsewhere on a wild three-month tour. Slowly they built an international following, which came to include Frank Rynne from Dublin, who first visited the village in 1994 to produce a record (Joujouka Black Eyes) and has been their manager ever since, producing more albums, organizing tours and, for the past eight years, the festival.

Music’s been an integral part of Joujouka since there’s been a Joujouka. Much of the history is shrouded in the same mist that rings the mountain landscape every morning and after it rains. But there’s consensus about the arrival of 15th-century Sufi saint Sidi Ahmed Schiech from Persia or Spain (a likely refugee of the Inquisition), who wrote music that had the power to heal disturbed minds. Today’s Masters are said to be able to heal through that same music.

Then there’s Boujeloud, a Pan-like half-goat man who’s known throughout Morocco, and who, according to myth, gave the gift of flute music to the master musicians. Every spring, he would come out of his cave and dance during the “feast week” that honored the Sufi saint, and bring fertility. The man who’s played this shamanic role for the past 47 years is an unassuming villager named Mohamed Hatmi. If you passed him on the dirt road, you might dismiss him as a simple man with little opportunity for self-expression. You would be very, very wrong.

Dressed in goatskin from head to knee, wearing a woven witchy hat and brandishing swaths of tree branches, gyrating onstage to the band’s cacophonous fusillade, Hatmi-as-Boujeloud is larger than life. His hips operate independently from the rest of his perhaps four foot, 10 inch frame, and he seems to be plugged into some infinite energy source. He thrashes musicians and when he races up to children in the audience, the blood drains from their faces as they flee in terror. 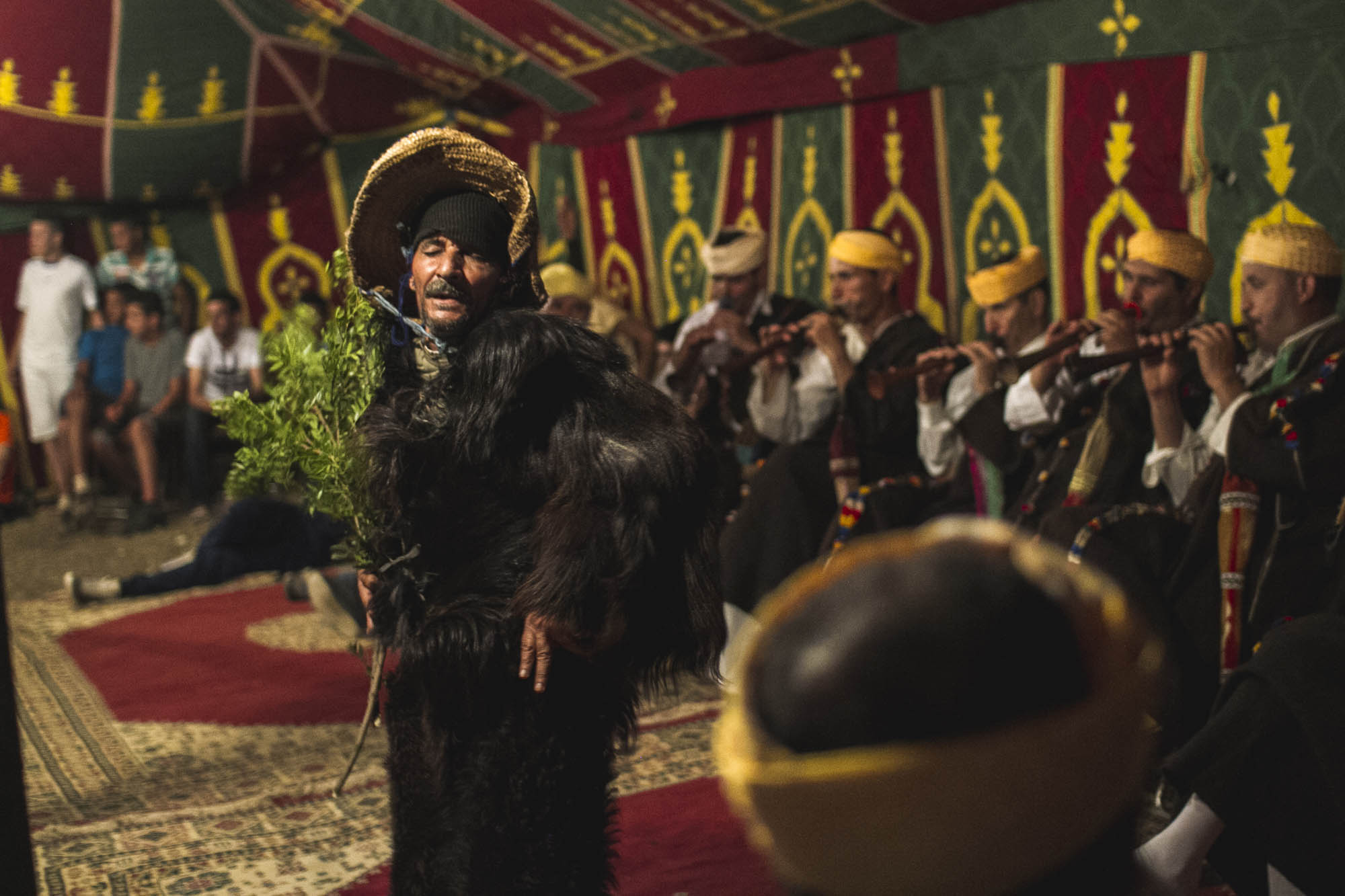 As Joujouka’s musical tradition has evolved from its tribal roots into an international concern, two factions have emerged who call themselves the Master Musicians. One group, led by Bachir Attar, whose father was the leader during the Jones era and who no longer resides in the village, has spent decades blocking the efforts of the local contingent (currently led by the bass drummer Ahmed el Attar) to call themselves the Masters and perform as such. It’s been challenging for them, but ironically, has led to greater exposure and acclaim.

As Rynne puts it in his unmistakable brogue, “The festival began to give the Master Musicians of Joujouka a voice and a place where they could show people that they were truly the masters of their village and their music. For their own community, it shows the younger generation that there is a future in the music, as each year people come from across the world and show devotion to their parents’ playing, culture and hospitality. And they want it to continue. They feel this music in their hearts; it’s in their blood.”

Joujouka – the place and particularly the music – doesn’t lend itself to easy verbal description. While there are a handful of recordings, the music is best experienced in situ. The sound of the ghaita, a double-reed horn whose closest cousin is the clarinet (or maybe tenor kazoo), is indescribable and yet is the driving pulse of the music.

The festival itself flows the only way it can: according to the collective vibe of the musicians and audience. It’s definitely not for everyone – though this year’s 40-plus attendees include filmmakers, writers, musicians, teachers, students, social workers, artists, designers, academics, people who work for insurance companies and mines, two professional belly dancers and one herpetologist. If you need a schedule, all-day entertainment, predictable mealtimes, a soft bed, Western plumbing and other creature comforts, go elsewhere. Joujouka is more like an anti–music festival. There are no announcements, no planned show times, no clear sense of anything.

By day, musicians gather, magnetically, on the porch of the main communal building to play their ancient songs and continually improvise on them. Kids drop by to bust a move. As guests finish breakfast with their host families, they amble over, speaking a Babel-esque mélange of Spanish, French, English and the few Arabic words they’ve acquired.

After lunch there’s more spontaneous musical performance – drums of course, the fiddle and probably birdsong flutes. (The intense ghaitas, pronounced “rye-ta,” only come out at night.) Musicians will put down their instrument to dance and pull people (usually women) up from their seats. Audience participation is as integral to the performance as the music-making. There’s a late afternoon break, usually involving a disco nap; around 10:30 or 11 p.m. dinner is served, before the evening’s climatic jam. 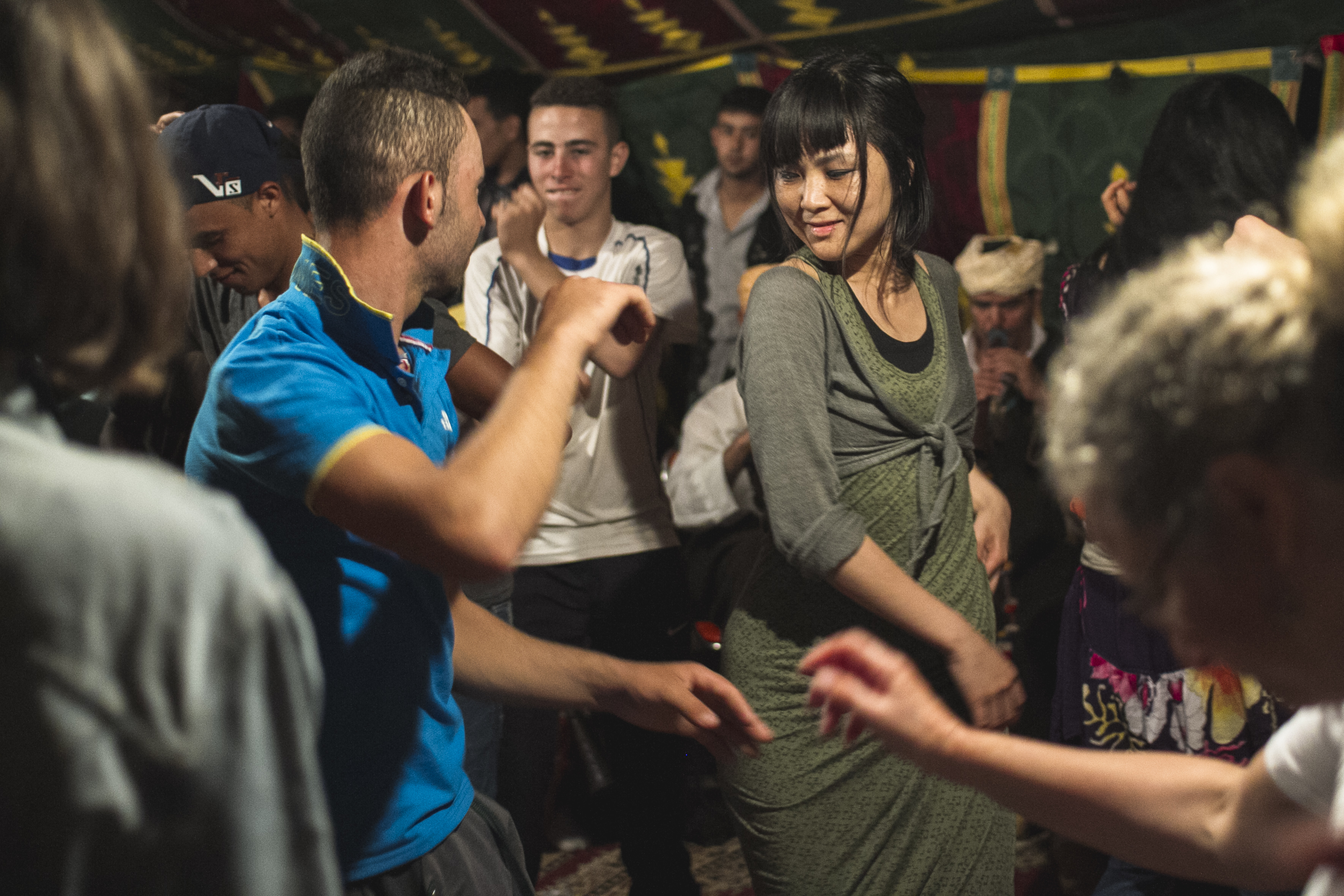 While no one looks at a watch, around midnight each night, the djellaba-clad MMJ take the stage and launch into the first number. The more you listen, the better able you are to pick out something like melody from the seven ghaitas, and if you really focus, you can start to follow some of the pounding polyrhythms. But then the horn leader imperceptibly signals a change, and everything shifts. Is this the same song about the mountain girl? Or have we segued into a number about spiritual devotion? Or is this the cautionary tale about too much hash, a fat wife and three kids you’ve never met?

No matter: You’re back in the hive, and your only job is to unhinge your hips and follow the footwork of the teenage boy you’re no doubt dancing with. All the while, the ghaitas are thrusting you forward. The percussion is pounding inside you. Sweaty? Exhausted? Dance on. Later, much later, you can sleep and dream, then wake up and do it all over again.

I ask Rynne why he puts on the festival. “Once it started it can’t be stopped,” he says. “Each year is unique, a different set of people, a new energy, and the Masters feed off that. By organizing the festival, I get to hear three days of the greatest trance music played live, and no two performances are the same. The only thing each year guarantees,” he concludes with an exhausted half-smile, “is that the Master Musicians of Joujouka will push it a notch more intense than the one before.”