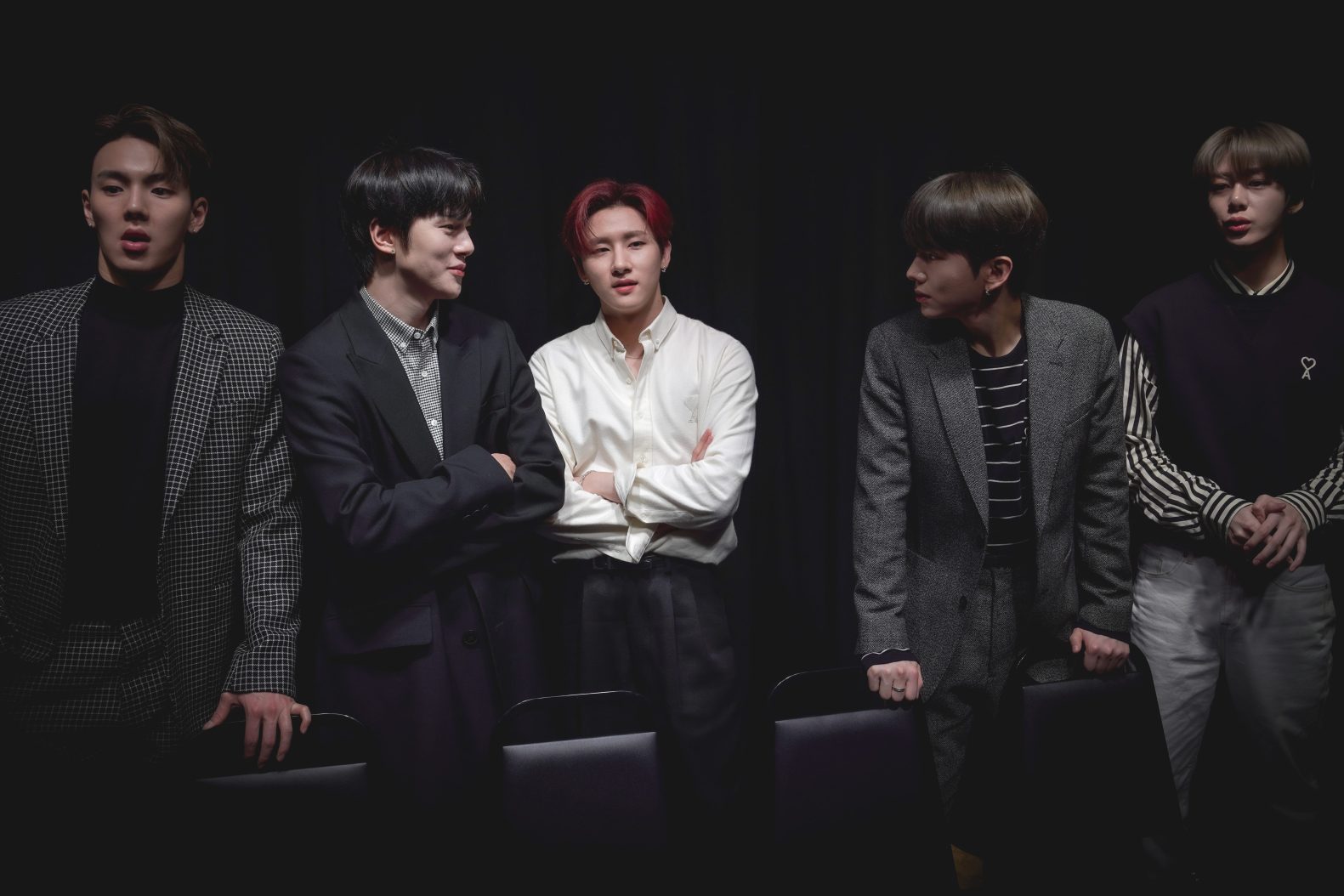 To really understand the popularity of the K-pop group Monsta X, you just have to listen.

Friday, you heard it in the screams of hundreds of sleep-deprived fans who packed the legendary Roxy Nightclub in Hollywood for a private Monsta X performance, and then snaked a line down four blocks of Sunset Boulevard for a chance to meet Shownu, Minhyuk, Kihyun, Hyungwon, and I.M. at a Monsta X pop-up shop in the former Tower Records building (the sixth member, Joohoney, was out sick).

After a brief Q&A at the Roxy — key takeaways: I.M. wants to learn Spanish; Minhyuk hates cucumbers; and Kihyun’s parents still scold him for spending too much money — the group performed a couple tracks from their new album, ALL ABOUT LUV, before a cavalcade of Jaguar convertibles (and a police escort) drove them down the aforementioned four blocks for a meet-and-greet at the Tower Records pop-up.

The Roxy show and pop-up shop was the kickoff to what will hopefully be a big year for Monsta X, who have an ambitious promo plan in place in support of ALL ABOUT LUV, which hit stores and streaming services, fittingly, on Valentine’s Day last week. The group’s sixth studio album, ALL ABOUT LUV (via Epic Records) marks the first all-English language release by a K-pop group since JYJ’s The Beginning in 2010. It’s also the first release from Monsta X since the group became a six-piece, following the departure of founding member, Wonho, last fall.

Listen, to the bouncy first single, “Who Do U Love?” which features French Montana and the catchiest chorus since Bieber and Sheeran’s “I Don’t Care.” First released last summer, the song has amassed more than 47 million streams online and 31 million views for the official music video on YouTube.

Another track that bridges boundaries: the Pitbull-featuring “Beside U,” which features writing and producer credits from Mr. 305 along with one Timothy Mosley, a.k.a. Timbaland.

The tight, 11-track offering spans pop, hip-hop and dance (“All Time Low” singer Jon Bellion and will.i.am are among the contributors), though Monsta X’s harmonies and laidback vocal stylings have more in common with One Direction or BSB, than that other three-letter group. As the first English album from an Asian group in almost a decade, ALL ABOUT LUV also stands out for its broader, more universal appeal.

“We always try to think of a better way to deliver our messages to fans who don’t understand Korean,” explains Kihyun, the main vocalist in the group. “As English is a universal language, we took advantage of our English album and tried to deliver messages that we want to give back to our fans. We want to give back the enormous love and support we had from them; they mean everything to us.”

“Sound-wise, this album is quite different from our Korean albums,” adds I.M., the lead rapper and youngest member of the group. “It is more pop as opposed to our Korean albums, which have a harder beat, K-pop vibe.”

As proof, Shownu, the leader of the group, cites “comethru” singer Jeremy Zucker as inspiration, while Hyungwon shouts out Justin Bieber, whose new album came out on the same day as ALL ABOUT LUV. “He’s very popular all around the world including Korea and I personally like his music very much,” Hyungwon says.

Celebrating their fifth anniversary together this spring (the group was formed through a Making the Band-style reality show in Korea and debuted in 2015), Monsta X is also tackling more mature subject matter on the album, with frequent references to hook ups, drinking and relationships — three topics that are rarely broached by the typically clean-cut K-pop set. The guys share writing credits on a number of the tracks as well.

“As the album title, ALL ABOUT LUV implies, every track of this album talks about different stories of love,” offers I.M.

Hyungwon, the lead dancer of the group, is more direct: “We would love for our fans to feel the romantic and sexual vibe of us after listening to our album,” he says, “which is something they haven’t felt from our previous albums.”

Listen to the toe-tapping, “Love U,” with lyrics like You make me crazy, it’s not just the wine / Go on and take me right across the line / Looking at you, I got one thing on my mind.

Listen to “Middle of the Night,” which chugs along with a Drake-lite beat produced by Ali Payami, who’s worked with Taylor Swift, Ariana Grande and The Weeknd. The chorus finds Monsta X yearning for a not-so-discreet, late-night rendezvous.

The most overt references come in the slow-burning ballad, “Misbehave.” I love it when we misbehave, they say that we got issues, but girl, that’s why I’m with you / Love it when we mess this up, every time we argue, straight into the bedroom. This is baby-making music, Monsta X-style.

This summer, Monsta X hits the road for a six-week North American headlining tour, playing arenas coast-to-coast. The tour kicks off June 2nd in Minneapolis before ending in Los Angeles at The Forum on July 11th. (While the group’s “We Are Here” world tour hit up nine U.S. cities last year — along with performances at the Teen Choice Awards and iHeartRadio Music Festival — this year’s tour is set to be their largest one yet, doubling up on both venue size and the number of places they’re visiting.)

The pop landscape continues to change, and while a number of K-pop acts have tried to break the North American market, the guys in Monsta X say they’ve done their homework and are prepared to make their mark.

“I think we try to approach our fans from various perspectives,” explains Kihyun. “Our music comprises genres like hip-hop, rock, ballads, jazz, pop, EDM, etc. We also release music in Korean, English [and] even in Japanese with different sounds and vibes,” he says. “Variety and diversity are our key identities.”

“Still,” adds Minhyuk, “We believe good music is a universal language and it works the same anywhere around the world.”

All they need now, is for people to start listening.