Michael Jackson ONE, the newest resident Cirque du Soleil production, opened at its permanent home inside Mandalay Bay on the Las Vegas strip this week. Members of Jackson’s immediate family, as well as an impressive group of celebrities ranging from Neil Patrick Harris to Spike Lee, convened at Mandalay Bay over the past few days to celebrate the world premiere.

Jackson’s mother, Katherine, his children Prince and Blanket, and three of his brothers and Jackson Five bandmates – Tito, Jackie and Marlon – attended the premiere, which was followed by a surprise performance from Pharrell Williams at an after-party event.

When asked for their immediate reaction to the show, all three brothers said, “It was hard not to like it,” almost in unison. (Marlon Jackson added: “That’s what your article should say: ‘Hard not to like it.'”)

It’s also hard not to think that Michael Jackson himself would’ve liked it. The show presents a virtual parade of “wow” moments, leaving nothing overlooked without ever losing focus of the most important aspect: the music. Most of the expected hits (“Thriller,” “Black or White,” “Billie Jean”) are woven together, along with some surprises and deeper cuts.

“There’s a lot of passion,” Jackie Jackson told Rolling Stone. “It’s an exciting show. Michael loved a lot of glitz and glamour and production. That’s what he was all about, and Cirque did everything more than enough. It was unbelievable.”

Sound designer Jonathan Deans told Rolling Stone that they installed more than 5,800 speakers in the custom-designed theater, which employs Meyer Sound’s cutting-edge Constellation System in addition to three speakers in the headrest of every seat in the building. The sound literally envelops every individual in the audience. Musical director Kevin Antunes (Madonna, Justin Timberlake, Rihanna) remixed each song to create an immersive sonic experience that honors the original tracks while also enhancing their theatrical elements, specific to the production. 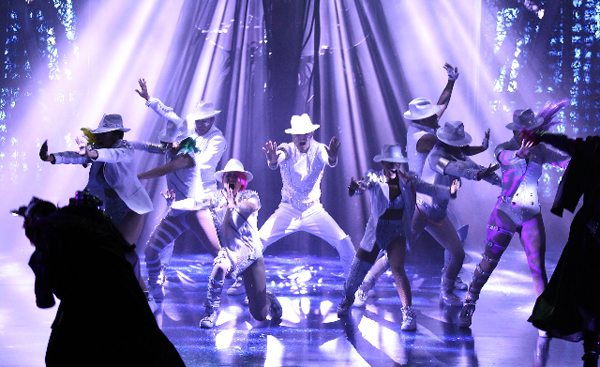 And then there’s the dancing. While Jackson was arguably one of the greatest dancers to ever grace a stage, Cirque has found a cast worthy of his company. That’s no surprise considering how many members of the creative team behind Michael Jackson ONE worked with the man himself, from famed costume designer Zaldy Goco to many of the scene choreographers.

Director and story creator Jamie King was one of Jackson’s four dancers on his Dangerous world tour before going on to direct tours for Madonna, Rihanna, Britney Spears, Christina Aguilera, Ricky Martin, Avril Lavigne, Celine Dion and others. King told Rolling Stone that he let four guiding principles dictate his approach to Michael Jackson ONE: love, grace, playfulness and courage. Those four key elements were “embedded in everything that was Michael Jackson,” says King. “And they’re embedded in the show.”

Perhaps the biggest secret behind the show’s success is that Cirque went to great lengths to make sure the production avoids the feel of a tribute show or a nostalgia event. The show doesn’t feature an MJ impersonator – although it does feature an impressive young kid with his own unique dance style, who would’ve been able to go head-to-head and toe-to-toe with Jackson. (“He was out of sight,” says Marlon. “I need to meet him!”)

There are a few welcome throwbacks – for instance, the iconic gravity-defying dance move that everybody associates with “Smooth Criminal” and, of course, Jackson’s Moonwalk. But there are also acrobatic feats, trampoline stunts and other Cirque elements that Jackson never had the chance to explore.

The performance showcases the things that made Michael Jackson such an incomparable performer without reducing the focus to mere idol worship, and it creates its own special moments in the process. Even when a holographic Michael Jackson appears, it serves as a reminder of the magic that Jackson created, rather than just being a holographic simulacrum of a fallen hero.

As someone who not only grew up with Jackson, but who also recorded and performed with him every day for years, Marlon’s enthusiasm for the show was immediate and evident. However, he said, “it doesn’t fully represent Michael, because Cirque didn’t know the real Michael Jackson. He’s much more than what they kept. They only know what they can see and what they saw of him. But Cirque did an incredible job.”