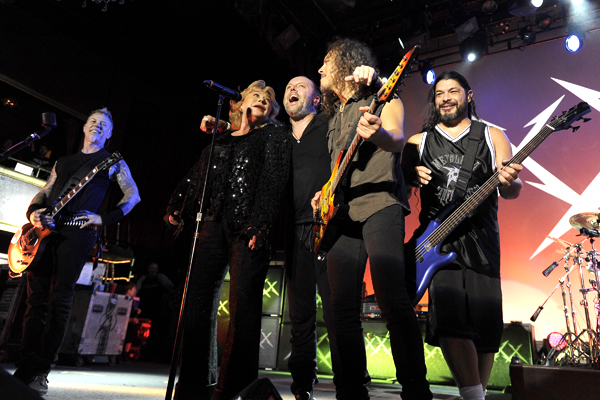 “I’m digging my way/To something better,” Metallica singer-guitarist James Hetfield declared early in his band’s December 7th show at the Fillmore in San Francisco.  That  line, from the slow crushing blues “Bleeding Me” from Metallica’s 1996 album, Load, was a perfect description of the long, hard and proud trip recounted in the rarities, curve balls and guest appearances packed into the second night of their 30th anniversary residency at the legendary dancehall.

The set list covered all three decades, from uncertain beginnings and cruel fortune to rebirth and recent blowback. Hetfield, drummer Lars Ulrich, guitarist Kirk Hammett and bassist Robert Trujillo opened, as they did on Monday, with a memorial to late bassist Cliff Burton: “To Live is To Die,” co-written by Burton and recorded by the band after his death in 1986 for 1988’s . . . And Justice For All. A version of “The Four Horsemen” from Metallica’s 1983 debut album, Kill ‘Em All, came with a guest vocalist, John Bush from the Eighties band Armored Saint, and a long preamble by Hetfield: Bush had been an early contender for the front man in Metallica, until Hetfield decided he could sing and play guitar at the same time. And after resurrecting one outtake, “Hate Train,” on Monday from 2008’s return to fury, Death Magnetic, Metallica debuted another tonight: the knotty episodic turmoil of “Just a Bullet Away,” which Hetfield claimed was “too long . . . too something” for that record.

The band also played three songs with Lou Reed, including the American live premieres of “Iced Honey” and “The View” from their recent controversial project, Lulu. Reed’s lyrics to those songs were obscured by the din, but he sang in a biting monotone that everyone should have recognized from his early-Seventies live classic, Rock and Roll Animal. There was a spirited pummeling as well of the Velvet Underground’s “White Light, White Heat” which, frankly, got a better response when Reed and Metallica played it in New York in 2009. “If you’re not nice, we’ll play the whole thing,” Ulrich cracked at one point during the Reed set, referring to Lulu. That is a transgression still worth considering.

All Killers, No Repeats
Except for the ritual all-star thrashing of “Seek and Destroy” at the end, nothing from the first night turned up in the second. “Enter Sandman” was followed by a pair of deeper “Black Album” broadsides, “Holier Than Thou” and “Wasting My Hate.” “My Apocalypse,” one of the best and least performed songs from Death Magnetic, made a rare and furious appearance. A stylish maternal figure in a spangled-black blouse, Marianne Faithfull reprised her grainy plaintive la-da-da’s in “The Memory Remains” from 1997’s Re-Load, while Kid Rock brought Michigan authenticity to the Garage Inc. arrangement of Bob Seger’s “Turn the Page.” Ecstatically welcomed on Monday night, ex-Metallica bassist Jason Newsted was back. But this time he and Trujillo were the double-bass engine in “Creeping Death” and “Battery.”

Metallica also went to great trouble to treat their favorite covers right. They played “Killing Time” – the 1991 flip of “The Unforgiven” and originally released as a B-side in 1981 by the Irish band Sweet Savage –  with that group’s singer, Ray Haller. For their extended tribute to the Danish black-metal band Mercyful Fate, Metallica reconvened four of the original members, including singer King Diamond, who was a dynamite sight in ghoulish face paint and Goth-undertaker’s threads. Even Ulrich was shocked to discover on stage, from one of their guitarists, that it was Mercyful Fate’s first live performance in any form since 1993.

A Birthday With All the Trimmings
There was no mistaking the party in this production. There were balloons, confetti and baby snaps; the vintage-photo show on the screen behind Ulrich’s drum kit included a series devoted to his dodgy haircuts through the ages. New Orleans’ Soul Rebels Brass Band called the congregation to order as they did on Monday – tonight with startling treatments of “Creeping Death” and “Sad But True” – and Armored Saint played a brief opening set. Before showtime, in the VIP balcony, the members of Metallica mingled with friends and peers such as Sammy Hagar and all three members of Green Day. And everyone learned a little something during the trivia contests moderated by comedian Jim Breuer, such as Hetfield’s least favorite song from 1984’s Ride the Lightning. The answer: “Escape.” So don’t expect it on Friday or Saturday.