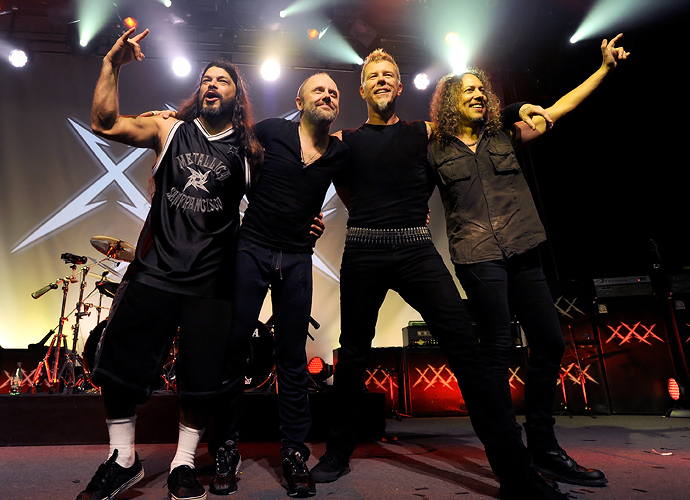 Singer-guitarist James Hetfield was so impatient to get started on December 9th, the third night of Metallica‘s 30th-anniversary celebration at the Fillmore in San Francisco, that he jumped behind Lars Ulrich‘s drum kit, hitting a chase-scene rhythm as he waited for everyone else to get on stage. “C’mon, Lars, c’mon!” Hetfield barked, apparently none the worse for wear after a four-hour soundcheck that day and eight straight hours of rehearsal on the 8th, technically an off-day.

“How are we going to top Wednesday?” Ulrich asked the crowd when he finally got into position. The answer: an opening half-hour of the most extreme music that he, Hetfield, guitarist Kirk Hammett and bassist Robert Trujillo played all week. As they had at the first two shows, Metallica started with an instrumental, “Suicide and Redemption” from Death Magnetic, a long dynamic tangle of subterranean throb, mid-tempo-blues anger and, at one peak, a Thin Lizzy-does-Ennio Morricone passage of harmonized guitars. “Master of Puppets” immediately followed – a rarity this early in a Metallica set. Right after that: “And Justice For All,” performed in full with vicious relish and no hint of exhaustion.

As if that wasn’t man enough, after a handful of relatively short shocks including “The Thing That Should Not Be” from Master of Puppets and the Mission: Impossible II-soundtrack nugget “I Disappear,” Metallica revived the whole of “The Outlaw Torn” from Load. Almost as long: the live debut of “To Hell and Back,” the third of the week’s Death Magnetic outtakes, which combined that record’s wall-of-thorns corrosion with Master‘s headlong thrash.

Animal Time
After that nerve and fury, a little anti-climax was inevitable. The guest-stars half of the show included a version of Lynyrd Skynyrd’s “Tuesday’s Gone” with, frankly, too many guitarists. The pals were all top-drawer – Faith No More’s Jim Martin, Pepper Keenan from Down and Corrosion of Conformity, and Skynyrd’s own Gary Rossington – but their contributions were obscured by the mass of amp buzz and bent-note cries. Judas Priest’s Rob Halford hasn’t lost a shred of shriek but looked like he’d misread his invitation, turning up to sing “Rapid Fire” from Priest’s 1980 album, British Steel, in a black formal-dinner suit, without a single biker’s stud.

Glenn Danzig was in jet-black as well for his Misfits cameos, belting “Die Die My Darling” and “Last Caress/Green Hell” with dark-lord vigor, and prodigal Metallicat Jason Newsted made his nightly apperance, playing second bass on “Fuel” and Ride the Lightning‘s “Fight Fire With Fire.” But the evening’s biggest surprise was Animal from the vintage-British-punk band Anti-Nowhere League. Towering over Hetfield in biker gear and Desert Storm khaki, the singer sold the profane disdain of the League’s 1981 B-side “So What” with offensive delight. Animal wasn’t the biggest name on the stage that night, but Hetfield aside, he was the night’s true god of waaaargh!

The Big Finish
“Maybe we should play ‘Suicide’ again – at least the first two minutes,” Ulrich said, before Metallica had finished plugging in on December 10th. So they did, reprising the hammering bass-and-drum intro to “Suicide and Redemption,” which the band felt was a little less than stellar the night before. “This is the only way we can do it . . . all or nothing,” Hetfield told the crowd earlier, reflecting on the 77 different songs in the four set lists and the hours of rehearsal and soundchecking that went into them that week. “Thank you for pushing us to another level.”

That meant one more Death Magnetic outtake (“The Rebel in Babylon,” actually the most complex of that album’s orphans), more action with Newsted and a rare pair of props for the underloved 2003 album, St. Anger: “Dirty Window” and “Frantic,” with that album’s producer, Bob Rock, getting some well-deserved spotlight on bass. Three Black Sabbath covers came with a pair of real-life Sabbaths, singer Ozzy Osbourne and bassist Geezer Butler.

The Old School, Back in Session
The proper climax, though, was a full-scale reconciliation, including virtually the whole of 1983’s Kill ‘Em All. Estranged guitarist and Megadeth boss Dave Mustaine, who was fired shortly before that album was recorded, reunited with his former band and three of the songs he co-wrote for them: “Phantom Lord,” “Jump in the Fire” and “Metal Militia.” Mustaine kept to his side of the stage, rarely venturing as far as Ulrich’s drum riser, as if he couldn’t help seeing wasn’t the chasm that between him and what might have been – not so much the road not taken as taken from him. But his solos were first-class, kinetic upper-fret shreds that proved the original dissent was not over talent.

The history lesson continued with appearances by original bassist Ron McGovney, guitarist Hugh Tanner – Hetfield’s high school friend and bandmate in the pre-Metallica combos Phantom Lord and Leather Charm – and guitarist Lloyd Grant, who played the solo on the original 1982 Metal Massacre version of “Hit the Lights.” Grant reprised his breaks in “Hit the Lights” with vintage flair (later, up at the VIP bar, he swore he’d been even better at soundcheck), and everyone, with Newsted, was present for a last lunge through “Seek and Destroy.”

The only missing alumnus was the late Cliff Burton. But his memory and hardcore spirit had been everywhere all week, in the set lists (“Orion,” “To Live Is to Die”) and nightly segments of reminiscence. At one point during the Burton tribute on Friday, Jim Martin asked Hetfield, “Did he ever call you ‘dick’?” “Almost every day,” Hetfield replied with fond laughter, as if he’ll never stop missing it.