When Metallica announced the location of their 3D concert film back in May, devoted fans made plans to travel by boat, train and plane to attend the two shows, providing Metal-i-lifers the bragging rights of being a part of the group’s cinematic history. The band personally chose director Nimród Antal (2010 action flick Predators and 2007 horror film Vacancy), and he set up a project that could not be farther from the tone and intention of their previous film, 2004’s Some Kind of Monster.

While that documentary captured the “din” of their existence – the awkward silences of a band knee-deep in therapy following bassist Jason Newsted’s departure and frontman James Hetfield’s return from rehab – this mini-tour, dubbed the Full Arsenal, promised to be a bombastic, ear-bleeding and brain-frying event.

The day before their first of two Vancouver shows, Metallica announced that a surprise third show had been added. That additional date came with a massive caveat and a hugely reduced ticket price: for a mere $5 (no taxes or ticket charges), fans could attend a decidedly less fluid night of filming, as cameras and drum kits would be moved between every song to accommodate shifting close-ups. The advertising of the show – a fundraiser for the Vancouver Food Bank – pulled no punches about the setup, and frontman James Hetfield spoke the truth shortly after taking the stage on this price-reduced event.

“It’s gonna be a very special night, where we’re doing some extra filming,” Hetfield said. “If you’re lucky enough, you might get your beautiful face in the movie. There’s gonna be lots of stops and starts – it is gonna be really loose.” 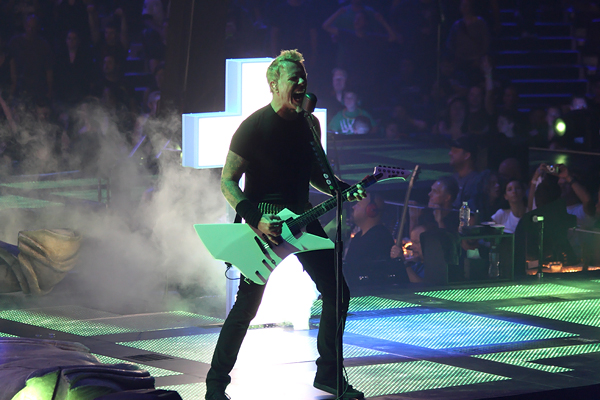 The set was ever-changing, a visual Goth-a-thon perhaps best described as “Rock Out With Your Coffin Out.” For the opening number (“Creeping Death”) the stage revealed LED screens that created growing pools of blood, spreading underneath the band’s feet. As Hetfield growled his way through “Fuel,” a massive burst of pyro – a dozen plumes, each about 20 feet tall and 10 feet wide – repeatedly singed the eyebrows of all those in the pit and the first 10 rows in the stands.

Throughout the night, 12 coffins floated over the stage displaying assorted images within, from entombed, panicking bodies to flame-throwers. Arguably the set’s musical and visual highlight, “One” simulated an inundated battleground, with pyro, fireworks and ear-piercing crashes preceding a creepy calm, as Hetfield and company’s quiet melody cut through the smoke while images of shadowed soldiers marched on the dozen screens above the stage.

The whole evening was very much like being an extra on a movie set, which, of course, we all were. Worth noting: in the space where reality turns into theater, there were intentional, drama-creating “planned malfunctions,” ranging from imploding statues to feigning-injured crew members. On this third night, however, a few unplanned gaffes happened as well, including misfires of pyro (requiring dousing by extinguisher) and a genuine near-disaster, when one of the massive 3D cameras dropped suddenly, barely missing a handful of audience members in the pit. 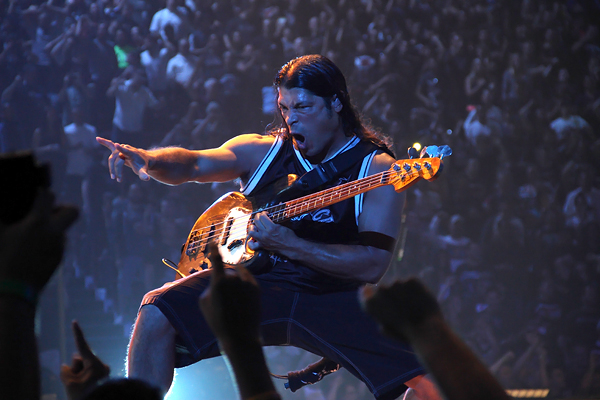 Although the event was at times trying for the crowd – audience members were up and down in their seats more frequently than at a Catholic mass – the band tried their best to keep the mood pumped. Though the breaks between each song repeatedly quashed the night’s momentum, there is little doubt that with all its grandiosity, this visually- tunning stage show will make for a spectacular 3D experience for all.

“Creeping Death”
“For Whom the Bell Tolls”
“Fuel”
“Ride the Lightning”
“One”
“Cyanide”
“The Memory Remains”
“Wherever I May Roam”
“Sad But True”
“Welcome Home (Sanitarium)”
” . . . And Justice for All”
“Fade to Black”
“Master of Puppets”
“Battery”
“Nothing Else Matters”
“Enter Sandman”
“Hit the Lights”
“Seek & Destroy”