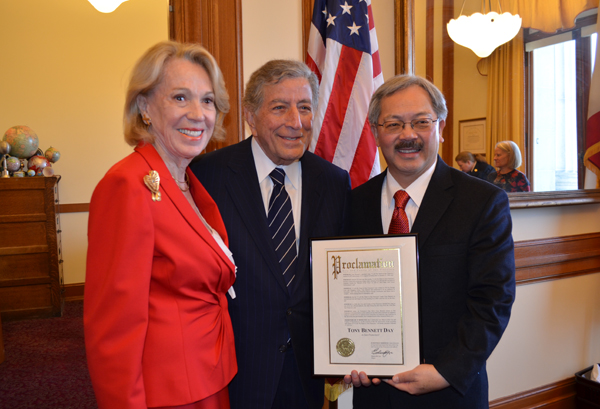 The celebration was in honor of the 50th anniversary of the song “I Left My Heart in San Francisco,” which Bennett first sang in the Fairmont Hotel’s Venetian Room, 50 years ago to the day. He is scheduled to perform the song there again tonight during a sold-out benefit concert.

While a chorus of young children serenaded Bennett, the mayor and spectators in City Hall’s Rotunda, every radio station in the city played “I Left My Heart in San Francisco” at noon. The song was also broadcast over the public address system in both Union Square and Hallidie Plaza. Cable cars were adorned with special decoration for the occasion, and tonight City Hall will be illuminated in red lights in tribute.

During the ceremony, Bennett wiped away tears as a specially assembled children’s choir – comprised of the San Francisco School of Arts, the San Francisco Boys Chorus and the San Francisco Girls Chorus – performed an a cappella version of the song. Afterwards, Bennett told the audience, “I’ve never seen anything in my life as beautiful as these young people.”

Just like Bennett himself, the ceremony had a strong tie-in with the city’s Major League Baseball team, the San Francisco Giants. The team’s public address announcer, Renel Brooks-Moon, presided over the proceedings, and team president Larry Baer, took a turn at the podium. Baer, who informed Bennett that the ballpark’s most prestigious suite will be renamed the “Tony Bennett Suite,” is an avowed fan of the singer. “You’re a huge part of the San Francisco Giants’ tradition,” Baer told Bennett. Every time the team wins at home in AT&T Park, “I Left My Heart in San Francisco” plays over the PA system. To date, the song has been played there 573 times.

A video tribute offered testimony from area politicians, including Senator Dianne Feinstein, Democratic Minority Leader Nancy Pelosi and former Mayor Willie Brown, Jr., prerecorded at various historical sites around the city. Speaking on behalf of them, Mayor Lee referenced the song when he told Bennett, “You’ve helped us climb not halfway, but all the way, to the stars.”

When Bennett finally stepped to the podium, he spoke humbly. “I always thought it would just be a local song, in this area,” he said.

Bennett, who picked up two Grammy Awards this week to bring his count to a total of 17, was honored elsewhere on Valentine’s Day as well. Google’s homepage featured a “Google Doodle” which played another one of his classic songs, his cover of Hank Williams’ “Cold, Cold Heart.” That song was Bennett’s first Number One hit when it was released in 1950.