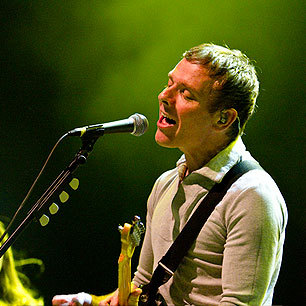 It’s day two of the “Matador at 21: The Lost Weekend,” the three-day festival bringing several thousand of America’s most indie to the Palms Resort Casino, partying it up in an increasingly red-eyed haze. As we all learned from Robert De Niro in Casino, they pump thin air into these places to make the players light-headed enough to keep playing, even when they’re losing. The same principle seems to apply to the festival, since Saturday’s lineup was an eight-band marathon, culminating in Spoon, Superchunk, Cat Power, and headliners Belle & Sebastian. All in!

Matador 21: All the Latest Photos

The sheer abundance of amazing bands this weekend is enhanced by the surreal Vegas milieu. It’s a scene where you can find yourself riding the elevator with members of Pavement and Superchunk, scope Smokin’ Joe Frazier in the lobby, then bump into Pauly D at the brunch buffet while you’re munching heart-shaped waffles with strawberry sauce. The slot machines have names that seem like they could double as the names of terrible indie bands ? Zeus II, Mystical Witch, Sushi Spin, Lucky Lion Fish. But the dollar-gobbling temptress that stole my money ? and my heart ? was Kitty Glitter, with its screen full of spinning cat faces. It also plays “Puttin’ on the Ritz” when you hit the jackpot.

Pauly D was here to do a DJ set last night, at the Palms’ Moon club, which meant it was T-shirt time for the local grenade-chasers. (Alas, the Situation and that weird Canadian model chick did not show up.) It was right down the hall from the Pearl Theater, where the Belle & Sebastian crowd was not exactly beating up the beat. But that’s part of the brilliance of Matador throwing this party here.

The bands on the bill represented all corners of the Matador catalog, starting with Girls, whose set of sensitive ballads was derailed by the same technical problems that bedeviled Pavement the night before. Perfume Genius did a daringly subdued set, just two guys whispering over their keyboards. There was also a welcome return from Come, who made one of Matador’s defining records in 1992 with Eleven: Eleven, including the world’s most sinister version of the Rolling Stones’ “I Got the Blues.” It proved Thalia Zedek and Chris Brokaw’s undimmed charisma. (It also proved that Live Skull alumni were killing it this weekend, after drummer James Lo ripped it up with Chavez on Friday night.)

The Jon Spencer Blues Explosion gave the crowd a taste of old-school showmanship; it’s hard to think of any band that seemed more at home right next to the Vegas strip. Spencer rocked a pair of black leather pants, which by the end of the set must have been pungent indeed, screaming and preaching his way through “Bellbottoms,” “Blues X Man” and “Fuck Shit Up.” In recent years Spencer’s been busy with his blues/rockabilly/punk project Heavy Trash, while Judah Bauer now plays with Cat Power, but the JSBX hopped back into their filthy sex groove as if they’d never been away. At the end, Spencer did his version of the James Brown “nobody can drag me off this stage” routine, except it wasn’t an act ? the roadies really were dragging the band off the stage.

Cat Power’s live sets are always a gamble: back in the day, Chan Marshall used to fall apart and whimper during shows, whereas in her more recent professional phase, she can seem businesslike to a fault. But her set was genuinely fresh, starting with just the ponytailed singer and her acoustic guitar, doing her always-chilling reinvention of the Stones’ “Satisfaction.” Even after her band joined in, Marshall sounded gorgeous and pensive wailing “Good Woman” as well as Nico’s “These Days.”

Superchunk were one of the night’s clear fan faves, and part of the fun was that it was indistinguishable from seeing this band in 1998, 1991, 1995 or 2008. The Chapel Hill punk quartet are riding high with their new album Majesty Shredding, their first in nine years and best since 1994’s Foolish. They pogoed through new songs like “Digging for Something” between oldies like “Seed Toss” and “Precision Auto.” They’ve always made a sly joke out of their consistent-hobgoblin approach ? after all, this is the band that called its publishing company All the Songs Sound The Same Music ? but at this point, that’s just a sign of emotional committment. Their set also brought back fond memories of lame Nineties humor. Q: Why did the blonde indie rocker cry? A: She moved to Chapel Hill and saw a sign that said MERGE LEFT!

Spoon, believe it or not, were once widely perceived as Matador’s pity-fuck band, only there to prove the label was open-minded enough to embrace mediocrities. That’s no real reflection on Spoon’s early work ? just a reflection on the Nineties as a boom time for guitar bands, when even a group like Spoon could get lost in the shuffle. (Britt Daniels made a sweet speech about how Matador heads Chris Lombardi and Gerard Cosloy “gave us a lot of faith in ourselves.”) The band was on fire Saturday night, with a horn section and an extra percussionist to drive superb new songs like “Got Nuffin” as well as standards like “Everything Hits At Once,” “Jonathan Fisk” and “Don’t Make Me A Target.” They also offered an extremely touching tribute to the late Matador artist Jay Reatard, covering his poignant ballad “No Time.”

The crowd was exhausted and grumpy as Belle & Sebastian took forever to reach the stage ? yeah, we know it takes time to hang curtains and set up the string section, but get a move on, flute roadie! And it didn’t help that the soundsystem stopped playing Matador tunes and switched to a mix of godawful folk music. The 12-piece Scottish ensemble didn’t start until shortly before 1 am, by which time the crowd was down to the diehard fans. But the music was an instant mood elevater, especially when they dipped into the Motown-flavored new tunes from Write About Love and beloved oldies like “The State I Am In” and “The Boy With the Arab Strap.” Stuart Murdoch charmed the pants off everyone, bantering about being a Sonic Youth fanboy ? when he interviewed them in 1989, he said, “Thurston yawned in my face” ? and tossing footballs into the crowd. Twee are the champions!

That’s one long Saturday night ? and yet that was merely (as the Situation would say) the shirt before the shirt. Sunday offers another marathon, including the Clean, Kurt Vile, the New Pornographers, Liz Phair, Yo La Tengo, and the rabidly awaited “classic lineup” set from Guided By Voices. That’s a lot of time to invest in music for one weekend. But it’s like Pavement’s horse-racing aficionado Bob Nastanovich always says: The less you bet, the more you lose when you win.