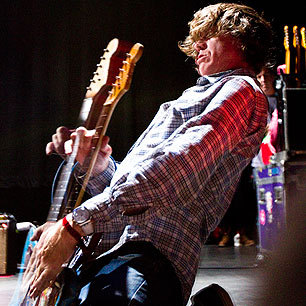 Welcome to Las Vegas: the first thing you see as you pull up to the Palms Casino Resort is the gigantic neon marquee proclaiming “Palms Welcomes DJ Pauly D!” But on the inside, it’s the Matador “Lost Weekend,” a three-day festival celebrating the 21st birthday of the world’s greatest rock label. The swank casino floor is swarming with indie rockers, which is oddly appropriate since the senior citizens playing the Mr. Cash-Man slot machines are dressed exactly the same as the indie rockers. If the pit boss came over the speakers and said “Can anyone name the new supergroup featuring ex-members of Sleater-Kinney, Helium, Autolux, Quasi and Excuse 17?” at least 75 percent of the tourists here would instantly reply “Wild Flag, and it’s Autoclave, not Autolux.”

These are hardcore music fans, and they have made the pilgrimage to the city of sin and Sinatra for a truly astonishing lineup of bands. Among the Matador legends playing this weekend are Pavement, Sonic Youth, Liz Phair, Spoon, Cat Power, Guided By Voices, Belle & Sebastian, Yo La Tengo, Jon Spencer Blues Explosion and the New Pornographers.

Matador 21: All the Latest Photos

And what better place to celebrate than Vegas, in a casino with one of the world’s last remaining Playboy Clubs and a spa that offers hotel guests an in-room spray tan? It’s definitely weird to see the musicians trudge through the blackjack tables, the barely clad cocktail waitresses, and the endless rows of slot machines. (The most appealing is Treasure Ceremony, featuring a dancing penguin with dilated pupils.)

It’s all to honor the unique legacy of Matador Records, the label that arrived in 1989 to sum up everything most exciting and least corny about guitar rock. Most of the label’s most famous acts are here, while others are just here in spirit, like Helium, Interpol, Silkworm and Mission of Burma. But it’s impossible to do justice to Matador’s track record with just a “Lost Weekend.” That would take at least a month, with slots of honor reserved for unsung legends like Sportsguitar, 18th Dye and the Lynnfield Pioneers. And given the presence of young Matador acts like Shearwater, Perfume Genius, Kurt Vile and Girls (all performing this weekend) the really surprising thing about Matador is that it’s never had a fallow period, never rested on its laurels, and never stopped looking to the future.

The festivities kicked off last night with two of the big guns: Sonic Youth and Pavement. Japanese punks Guitar Wolf began the Friday-night slate with a bang-up set that barely lasted 15 minutes; Fucked Up did their tribute to early Eighties hardcore bands. Chavez delivered one of the weekend’s most eagerly awaited (and received) performances. This New York quartet made two of the Nineties’ great guitar records, Gone Glimmering and Ride the Fader, with Clay Tarver and Matt Sweeney packing complex harmonics into compact four-minute postpunk structures. They never tried to milk it, so they didn’t get the attention they merited at the time. But in the years since they broke up, they’ve become quite the guitar-maven cult legend, and they lived up to it Friday night, with the melodies of “Unreal Is Here” and “Flight 96” lingering in the ears hours later.

Sonic Youth have had an odd kind of parallel history with Matador through the years, so it was fitting when they finally joined the label last year to release their magnificent album The Eternal. They’ve been playing lately as a quartet, since bassist Mark Ibold is back on the road with Pavement (the two bands played the Hollywood Bowl the night before). So they did a set of older material from their four-piece days — most of the songs in their set were recorded before Matador existed — yet brought new power and majesty to every song. What the hell was up with Thurston Moore? He danced all night like he was auditioning for a showgirl gig, striking yogic poses across the stage as he, Lee Ranaldo, Kim Gordon and Steve Shelley brought ungodly excitement to classics like “Catholic Block,” “Stereo Sanctity,” “The Sprawl” and “’Cross the Breeze.”

Sonic Youth were unbelievably cocky, pausing only for occasional asides as Moore introduced “Schizophrenia” (“This is for all you pot smokers”) and Gordon dedicated “Bull in the Heather” to Pavement’s Bob Nastanovich. They ended with a jaw-dropping, face-punching, crotch-kicking version of “Death Valley ’69.” By the end, Moore and Ranaldo were banging their guitars together in a swordfight that turned into a tangle on the floor, with the guitarists rubbing their axes together. It was like the Thurston/Lee porn-slash-fan fiction that Sonic Youth heads have dreamed of for years. Kim Gordon, no fool, got in on the action, rubbing her bass against their guitars, in an orgiastic noise finale.

Pavement knew they never had a prayer of topping that — as Steven Malkmus said after “Conduit for Sale,” “That was kind of like ‘Death Valley 69’ meets … uh, some Fall song, I guess.” (Try every Fall song.) But they delivered a loose, ramshackle set, as Malkmus went all-out with his wiggling and dancing and Beatle-esque hair-tossing, clearly having a blast in his non-fuck-giving way. Pavement dipped into rarely played gems (“AT&T,” which they just debuted last week in Austin), plus fantastically urgent versions of “Shoot the Singer” (Malkmus moaning “I can’t put you down,” over and over, into the “ba ba ba da” coda) and “Fin,” where he stretched out for a guitar ramble that floated from Jimi Hendrix’s “Little Wing” to Jerry Garcia’s “Dark Star” to Sonic Youth’s “Wildflower Soul.” He also delivered some inspirational stage banter, thanking Matador with the line, “I think it’s gonna turn out to be a great idea to be here.”

The Pavement lyric “You’re so beautiful to look at when you cry” definitely applied to this set, since the band members seemed to be having some hilariously sullen mood swings. Malkmus lay on his back for the entirety of “Kennel District”; a couple of times, Scott Kannberg stomped offstage as fans asked aloud, “Wait, did the band just break up again?” There were constant technical glitches. But while the roadies struggled to repair Steven West’s drum kit, Malkmus shrugged and said, “Bob, why don’t you and I play ‘Perfect Depth’ or something?” The resulting guitar/drum ballad, with everyone joining in by the end, was a definite up; it’s hard to imagine it won’t stand as one of the weekend’s musical highlights, no matter what happens from here.

But it’s also hard to imagine any of these bands will top that “Death Valley ’69.” Sonic Youth wrote the song in 1984 as a look back at twisted hippie subcultures. But what they couldn’t have known back then is that, trying to shake off the present and re-interpret the past, they were inventing a sound of the future. Practically every band in Vegas this weekend turned out to be part of that future, and every fan here came to celebrate it.