Mary Lambert is best known for singing the hook on Macklemore & Ryan Lewis’s gay rights anthem “Same Love,” which inspired the chorus for her own ballad, “She Keeps Me Warm.” She’s an outspoken advocate not only for LGBT rights but for self-love and body acceptance, but it took a long time for the Seattle songstress, spoken-word artist, and childhood abuse survivor to establish her voice, find success — and find inner peace.

“My childhood sort of becomes a laundry list of trauma,” Mary reveals to Yahoo Music. “I try to be really careful when I talk about my trauma, because you don’t want to open old wounds and re-traumatize yourself, and you also don’t want to be exploitive about what you’ve gone through. But I was sexually abused by my father, and my mom’s partners were really, really abusive… Until I was 10, I just heard that I was a worthless piece of s— for a long time.

“And then I was gang-raped when I was 17… I felt so worthless. I think when you’re sexually abused, or when you’re abused in general, it really devalues who you are. Because you’ve been violated, you start thinking introspectively, like, ‘What did I do wrong? What’s wrong with my body that it got abused? What did I do?'”

From a young age, it was songwriting that helped Mary, now 25, deal with the horrors of her daily life. “I started using music as catharsis, I think at like 5,” she recalls. “We had this little dinky keyboard — you know, those ones that have like a programmed song — and I figured out how to change the keys on it… I remember just going into my room and I would just sing, ‘You are loved, you are loved.’ I would write these songs, and it was like sort of a self-comfort. And it became an escape, like a really awesome coping mechanism.”

At age 19, Mary — who now says she’s “really proud that I get to use this platform to be an advocate for standing up” — penned what became another one of her signature works, “Body Love.” The semi-spoken-word piece, which unflinchingly explores such intense issues as cutting, disordered eating, and binge drinking, helped her come to terms with the abuse, including self-abuse, that her own body suffered during adolescence.

“I wanted it to sort of be a letter to myself in high school,” Mary says of the powerful song. “What’s really neat is the fact that I get to perform it almost daily. I have to perform it because it’s a part of my sort of artistic identity. Even if I wake up and I have a s— body day and I’m like, ‘I hate the way I look’ or something, I have to perform that song. And it’s amazing, the way I feel afterwards. I’m like, ‘Yes, now I feel really awesome and my body is great, and this is who I am!’ It’s really cathartic to be able to perform it every night.”

Despite all her setbacks in life, or maybe because of them, Mary was determined from a young age to one day become a pop star. “I would sing to my Beanie Babies, and I sort of created this alternate universe where I was famous and there were thousands of people that I was singing to,” she says with a grin, recalling those early days alone in her bedroom with her keyboard. “I remember I’d have these concerts when no one was home and I would bow and say, ‘I wrote this song when I was 7 years old and I’m inspired by my music teacher, Mrs. Church…’

“I would say all of these things, sort of my preparation [for stardom]. Like, I’d have phantom interviews with Leno. I was ready… I think there was a moment when I was growing up that I was like, ‘This is going to be my life. I don’t know how it’s going to happen, but I will make this happen, no matter what I do.’ The dream was always in the back of my head. I would always say, ‘I’m going to need Sunday nights off, because that’s when the awards shows are, so if could you leave that [open] in my schedule?’ And I always told everyone, ‘I’ll see you at the Grammys.'”

[Related: Queen Latifah Tears Up as She Marries 33 Couples During Grammys]

And then, this past February, that dream came true: Mary didn’t just perform at the 2014 Grammy Awards with Macklemore & Ryan Lewis, but their landmark “Same Love” performance served as the soundtrack for a Queen Latifah-officiated mass wedding for 33 gay and straight couples — with even Madonna standing in as a sort of matron of honor. Mary says it was the most important moment of her life so far, the culmination of everything she’d worked towards. And as much as she’d hoped and planned for this sort of breakthrough, when it actually happened, it threw her for a loop. 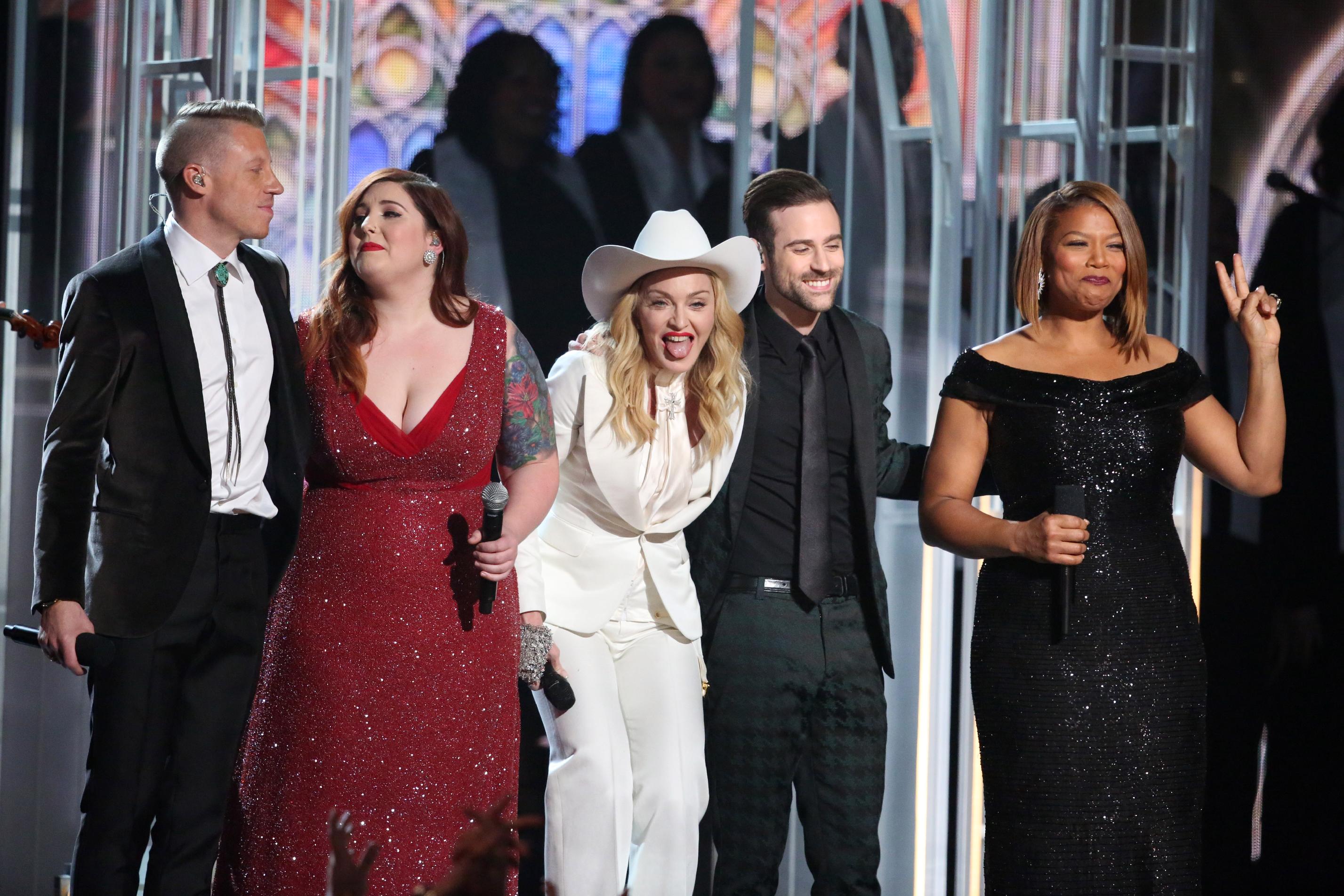 “I remember just standing there going, like, ‘What life am I in? What the hell is going on?'” Mary says of that surreal night. “And I’m looking at the set and I’m looking at everybody, and I’m like, ‘This is a dream, this doesn’t happen!'”

That “Same Love” performance wasn’t just a memorable Grammy moment; it was a truly historical event. “I don’t think any of us ever believed [‘Same Love’] would have the cultural significance that it has had. I definitely feel like we’re in the middle of something of a cultural shift,” says Mary, who is a lesbian and currently dating Michelle Chamuel from “The Voice.” Mary says she hopes people who are against gay marriage really listen to “Same Love’s” message.

“This is one of those civil rights moments where you should be on the right side of history,” she stresses, “because we’re going to look back and you’re going look like an idiot [if you were on the wrong side], and you are coming from a point of view that is inherently hateful, whether you believe it to be or not. I think we are in the middle of something really big.”

There’s no doubt that Mary Lambert is in the middle of big career that’s about to get even bigger with the recent release of her EP, “Welcome to the Age of My Body.” And while she says, “I don’t know what I did [to deserve this good fortune], but I just want to keep doing it,” it’s clear that Mary has truly earned her success.