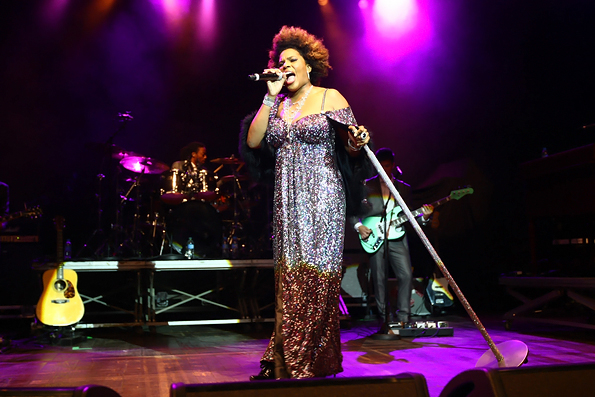 Macy Gray is set to release Covered March 27, and the singer says this project is a long time coming. “After my first record I wanted to do a covers album, but I guess covers albums have kind of a stigma, they’re not known to do very well and they’re designed for people when they’re not doing their own thing anymore,” she tells Rolling Stone. “So I was talked out of it, but I’ve always wanted to do one.”

So how did Gray convince everyone around her that singing other people’s songs was a good move? “Finally I had this idea to do rock covers and everyone liked that idea,” she says. Covered finds the Grammy-winning voice behind “I Try” taking on such signature rock bands as Radiohead, Metallica, Arcade Fire, My Chemical Romance and many more.

Yes, Macy Gray does Metallica’s “Nothing Else Matters,” and kills it, starting off the song slow, haunting and atmospheric, before her  jazzy vocals kick in. It’s a radical reinterpretation, one she’s already gotten the band’s approval for via her producer. “I didn’t talk to Metallica, but the producer, Hal Willner, did ‘cause he’s friends with them and he said they played it a bunch of times and they ‘adored’ it, that was his word,” she says.

She has directly contacted a few of the artists she reinterpreted. “I emailed Gerard Way, he said it was awesome,” she says of her take of My Chemical Romance’s “Teenagers.”

“I just met with Aaron [Bruno] of AWOLNation about three days ago, we went to lunch,” Gray says. “He really liked ‘Sail,’ but it’s funny ‘cause he had a lot of questions about how we did it and what made me want to do it and stuff. I thought that was cool.”

Gray was inspired on the record by Nina Simone. “I was watching [Simone’s] version of ‘My Way’ and she did her own thing completely, it’s nothing like the original, and so that’s when I decided to go get whatever songs we really loved,” she says. “I think that’s the thing people do, they cover the songs and they try to do it kind of like the artist. But we just completely did our own thing.”

Having a completely different style than the artists she covers – whether it’s her rousing take on Radiohead’s “Creep,” the Eurythmics’ “Here Comes The Rain Again” or “Nothing Else Matters” – allows Gray to take the songs wherever she wants. And she admits she was free tackling some of these songs because she was a fan, but not in the genre herself. “I imagine if I was a metalhead, I would feel bad about rearranging James Hetfield,” she says. “But being that I’m not, I just naturally did my own thing, so it made it a lot easier.”

For Gray interpreting rock artists seemed to be the best approach, as she attempted some Prince songs as well, but they didn’t work. And one artist she wanted to cover so badly she tried  five songs but could never make work was Fiona Apple.

“We had a few that were disastrous,” she says laughing. “We tried ‘Criminal’ and ‘Sleep To Dream,’ then we tried ‘Extraordinary Machine.’ That was the one we really wanted to do, but it’s hard to do her because her songs are so moody, and if you take it out of that it doesn’t sound right.  Her songs are so dark and moody already, so if you move it around it’s weird, and if you do it dark and moody you might as well just leave it as is.”