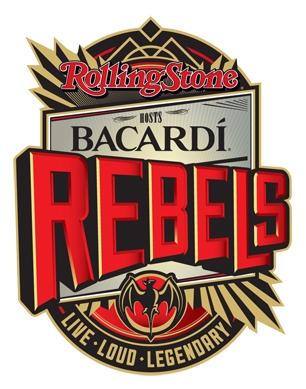 Rolling Stone is thrilled to host this first-ever BACARDÍ® Rebels event. With DJ Cassidy manning the decks all night, the show will also include celebrity guest presenters and BACARDÍ® drink stations.

About BACARDÍ®
BACARDÍ® is proud to celebrate Cuban Independence Day with a toast of the Cuba Libre. Founded in 1862 in Santiago de Cuba by Facundo Bacardi Masso, a man with an independent spirit and a passion for creating the highest quality rum possible, BACARDÍ® was never content to sit by and idly watch others change the world. No, instead, BACARDÍ® has long embraced playing a pivotal role in changing the status quo. At the turn of the 20th century, when Cuban patriots and their American comrades joined together to fight against Spanish oppression, the founders of BACARDÍ® were right there, fighting alongside them. And when victory was won, BACARDÍ® Rum was right there in the rebels’ glasses. They toasted with this cocktail – a mixture of BACARDÍ® Rum, Cola and fresh lime – the cocktail born in a moment of celebration and named for the liberty the rebels fought so hard to gain. ¡Cuba Libre! It’s not just the original cocktail freedom, it’s the original cocktail of rebels.