Pop singer Lykke Li is only three albums into her career, but she’s already approaching a Vegas period, with flashy floor lighting, silky, wavy couture and a fresh set of decidedly catchy heartfelt torch songs. Last night, she performed at the Apollo, New York City’s home to larger-than-life showmanship, a hallowed institution that has hosted captivating crowd movers like James Brown and Marvin Gaye over its eight decades and where showmanship is so precious – thanks to its famous amateur night – it sells “Be Good or Be Gone” T-shirts. But Li’s performance was worthy enough to save her from being yanked off the Apollo stage, as so many have.

“I have to admit, my new album is a bit of a bummer,” said the singer, who had come onstage in a sea of smoke wearing a black veil. “So you can sit for this next song.” The track in question was her recent single, the sullen, pleading, pallid “Love Me Like I’m Not Made of Stone,” which she sang beautifully. During the performance, the audience sat reverently.

But while they hung on her words, they didn’t always know how to behave. The music on Li’s first two albums has an inherent danceability, but the Apollo’s seats are tight and those who tried to dance in the aisles were asked kindly to stop. Many of the singer’s new songs, from her recently released third LP I Never Learn, are modern lighter anthems, the sort of song you enjoy with drowning yourself in a glass of wine rather than spilling a Solo cup of vodka. So the occasional track like “Never Gonna Love Again” (dedicated, fittingly, to “anybody who’s had their heart broken”), which has an Eighties-style power-ballad chorus that just begs to be blared on a beach boardwalk, found the crowd merely mouthing along. Eventually, by “I Follow Rivers” the audience found its groove and stood, danced and swayed for the rest of the set. 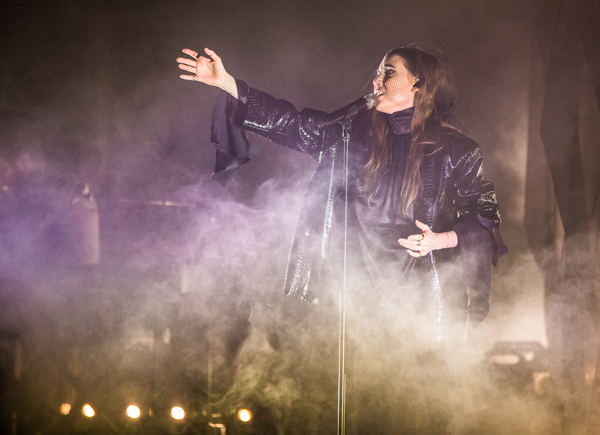 The design of the room didn’t always work to Li’s favor, and many of her harder-hitting songs seemed to hang in the air between fans and the Apollo’s soaring ceiling. Whether it was the venue or Li’s backing band dialing up the reverb on their amps, the evening’s music often sounded as though it were forcing itself through a dreamlike swirl of space (made all the more surreal by sighing smoke machines and long, sheer black curtains onstage). Li’s voice – a brittle, forceful cry, reminiscent of Elizabeth Fraser’s if her voice was razed of its honey-smooth sheen – served as the guiding light, rising above the fog of surf guitars, keyboard blankets and tom-tom explosions. It kept everything in check and made the musical experiments, like some cowboy space-pop steel guitar on the usually electronic “Little Bit,” all the more interesting.

Regardless of the environment, Li came across as a confident frontwoman – a role long in the making when compared to the frenetic, arrhythmic movements that defined her early performances in the late 2000s. At the Apollo, her arms still moved as though controlled by invisible marionette strings, but her newfound confidence somehow made it seem less twee. Although she described I Never Learn to Rolling Stone as “power ballads for the broken,” she owns songs like “I Never Learn” and “No Rest for the Wicked” with poise intact.

But nowhere was this more apparent than on her first encore song, “Du Är Den Ende,” a pop version of the entrancing Spanish classical guitar piece “Romanza,” originally set to Swedish lyrics as recorded by Lill Lindfors. Li, who recorded the song for a movie called Tommy, described the song as being quite sensual and she pulsed to the beat, removing her sparkly silver jacket in a passionate display. It was fun and moving at the same time. (Incidentally, Vegas icon Tom Jones has sung an English-language version of the song called “Forbidden Games,” and once wore a sparkly jacket while doing so.)

Right now, Li’s glitzier, more self-assured stage presence connects both her past and present in a way that works. She won over the notoriously fickle Apollo audience after all.