The second day of Lollapalooza 2018 is in the books. An estimated 100,000 people are expected to flood Chicago’s Grant Park each day, but Friday’s crowds seemed to outnumber Thursday’s attendance by a significant amount as the lineup promised sets by Bruno Mars, Post Malone, the National, Tyler, the Creator and more.

In 2016, Lollapalooza expanded its weekend’s events from three to four days, adding Thursdays into the mix. This year, Day One included returning acts Arctic Monkeys and Travis Scott, along with some solid showings from newcomers: Khalid and Billie Eilish each performed separately as well as together (Khalid, whose set followed Eilish’s made a surprise appearance during the teenager’s turn for their smoldering ballad “Lovely”). Khalid also had a surprise guest of his own when he brought out Normani for “Love Lies.”

Here are some of the best acts Rolling Stone caught on Day Two:

Dream Wife: Not one, but two amps went down duringBritish-Icelandic trio’s early slot, but the band didn’t need any extra signal boost to showcase their power. Dream Wife’s set opened the day, fueled by some timely messaging: “Gender’s a construct. Make your own rules,” lead singer Rakel Mjöll said before launching into the punky pop of “Somebody.” The group’s rallying cry of “I am not my body, I am somebody” — which addresses consent as well as self-acceptance — became a full call-and-response, punctuated by the trio’s aerobic spins, back bends and kicks. It was a solid showing for the group’s first North American festival slot. AL

Lizzo: Lizzo won’t tolerate “No Scrubs”  the TLC song she covered during her fierce set, and she doesn’t think anyone else should, either. It’s a point she made clear with her own songs, including “Fitness,” “‘Scuse Me” and “Good as Hell,” which she delivered as a superhero for body-positivity. Backed by her Big Grrrls dancers and DJ Sophia Eris, who sang and stepped in with the choreography throughout the set, they served up playful sass alongside Lizzo’s liberatingly rapped and soulfully sung lyrics. AL

Tyler, the Creator: “I hate when rappers tell you to have a mosh pit, it’s corny” admonished Tyler, the Creator, “But there’s like 30 separate mosh pits, and there could be one big one if you just looked back.” Dutifully, everyone in attendance formed two massive mosh pits on either side of the barrier bisecting the crowd. Tyler’s set was an exercise in growing up; he never incited the levels of reckless abandon that Travis Scott (or 2012 Tyler) did, but it’s not because he couldn’t. Instead, he opted to give advice on how to party, and temper the furious songs of his youth with cuts from Flower Boy, his more laid-back and improvisational latest album. For anyone that’s been following Tyler since his Bastard days, it’s a surprise to hear his set end with a heartfelt singalong, but that’s what happened as soon as “See You Again” rang out as the set closer. BK 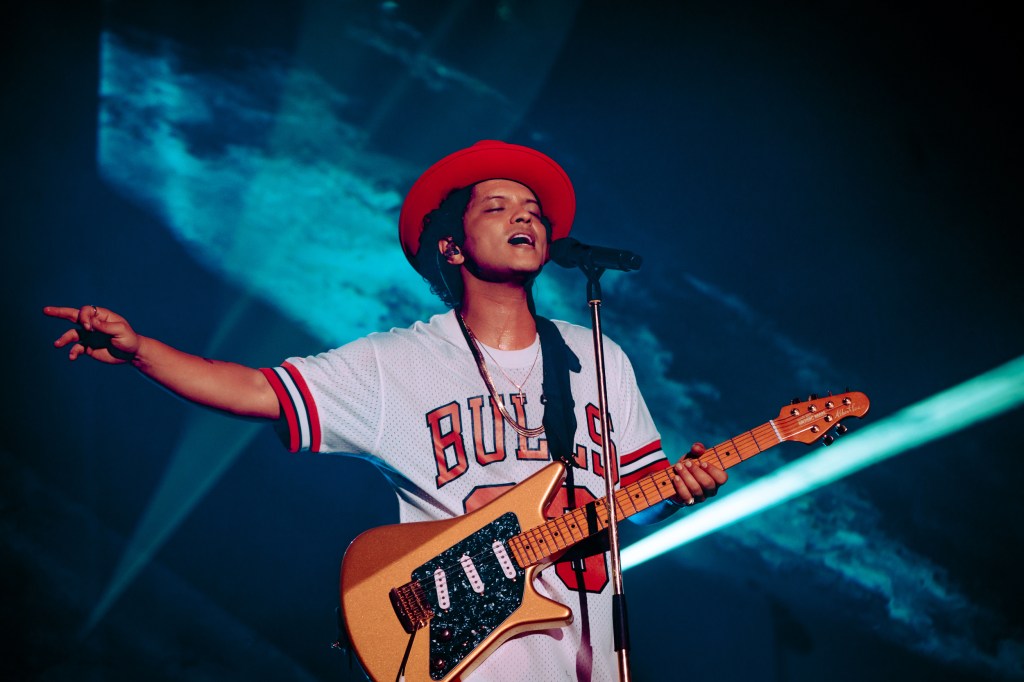 Bruno Mars: To no one’s surprise, Bruno Mars drew the largest crowd of the festival so far. He’s a natural and gifted showman, backed by dancers and grooving musicians, whose collective charm is tailor-made to entertain a massive crowd. Fireworks popped off throughout the performance, playing up the celebratory tone. The main attraction was Mars’ feel-good, never-ending series of hits, like “Finesse,” “That’s What I Like” and “24K Magic” — all crowd-pleasing, danceable, singalong earworms.

Even the slow jam “Calling All My Lovelies,” a song aimed at telling the woman who has been keeping him on hold that there are others waiting in the wings, came off as a cheeky respite from the uptempo songs, but didn’t diminish the audience’s energy at all. To cap off the flirty, entertaining set, he turned up the romantic vibes with “Just the Way You Are” before closing with the rousing “Uptown Funk.” AL

Lollapalooza continues Saturday with the Weeknd, Vampire Weekend, Logic, Dua Lipa and more, with many of the festival’s sets live-streamed throughout the weekend.