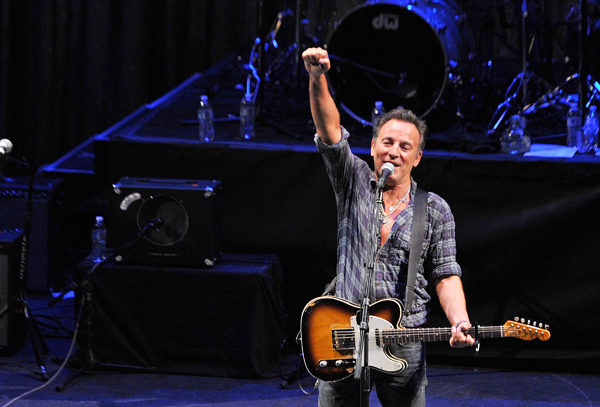 Bruce Springsteen’s forthcoming album Wrecking Ball is largely composed of new music, but two songs on the LP (and one other track on the deluxe edition) were frequently played live on previous tours. It’s unclear whether they’ve been re-worked in any substantial way, but these YouTube videos can give you a pretty good idea of what they’ll sound like. Also, check out this official video for the new single We Take Care of Our Own.

1. “Land of Hope and Dreams”
When Bruce Springsteen reunited with the E Street Band in 1999 they didn’t record a new album, but they did debut this stellar song on their tour. “Land of Hope and Dreams” was played at nearly every show on the 1999/2000 tour, and has been frequently revived since then. If Wrecking Ball is as angry as some reports suggest, it makes sense that he’d want to have a song towards the end of the album with an optimistic tone. It’s also a chance to get Clarence Clemons on the album, presuming they are using an old recording of the track.

2. “American Land”
Bruce Springsteen’s 2006 LP We Shall Overcome: The Seeger Sessions was limited to covers of old folk songs, but when he hit the road behind the disc he unveiled this original song. It was introduced at Madison Square Garden as an “immigrant song for New York City,” and it’s about all of the immigrants that helped build this country. The song re-appeared on the E Street Band’s Magic tour in 2007. He’s already released a live version of the song from the Sessions Band tour, and it’s unclear what version will be on the deluxe edition of Wrecking Ball. Its inclusion here is likely a knock at all the anti-immigrant hysteria on the right.

3. “Wrecking Ball”
In the summer of 2009, Bruce Springsteen and the E Street Band did a five-night stand at Giants Stadium shortly before it was demolished. He opened all of the shows with “Wrecking Ball,” a song he wrote just for the occasion. On the surface, it’s a song about the stadium – but Springsteen clearly is drawing parallels between himself and the resilience of the venue. It’s unknown whether or not he modified the lyrics for the new album. Lines like “My home is here in the Meadlowands” may need to go, but who knows?

4. “We Take Care of Our Own”
“We Take Care of Our Own” is the first of the nine brand new songs from Wrecking Ball to get officially released. We’ve heard that the album has “unexpected textures – loops, electronic percussions,” but this sounds like a pretty traditional E Street Band-style rock song. We could be wrong, but that certainly sounds like E Street band member Roy Bittan on keyboards. In the grand tradition of “Born in the USA” and “This Land Is Your Land,” some critics have already declared it a jingoistic, chest-thumping, “America, Fuck Yeah!” song – but it seems crystal clear that Springsteen is suggesting that America is not living up to its ideals, or “taking care of our own.”