Led Zeppelin Announce the Release of Their First Three LPs Remastered With Unreleased Songs, to Come Out in June - Rolling Stone
×
×

As Led Zeppelin once promised, the song remains the same – but this time they’re throwing in a few extras. This summer, the group is reissuing their first three albums as deluxe editions packed with previously unreleased goodies.

It’s the first installment in what the band describes as an “extensive reissue program” of its nine studio albums that have been remastered by guitarist and producer Jimmy Page. Moreover, each record will come out as a single-disc remastered album or as a “Deluxe Edition” with a bonus disc of previously unreleased studio and live tracks that the group recorded around the time of the album. The new versions of Led Zeppelin, Led Zeppelin II and Led Zeppelin III will all hit stores on June 3rd.

The albums will each be available in a variety of formats, including single CD, two-disc deluxe edition, single LP on 180-gram vinyl (with a sleeve that replicates the original Led Zeppelin III moving wheel), deluxe-edition vinyl and digital download. The group is also putting out a limited-edition “Super Deluxe Boxed Set” of each album that includes all of the audio on CD and vinyl, as well as a high-definition audio download card, a hard-bound book containing rare and previously unseen photos and memorabilia and a high-quality print of the album cover, the first 30,000 of which will be numbered. The Super Deluxe edition of Led Zeppelin will also contain a replica of the band’s original Atlantic press kit.

“The material on the companion discs presents a portal to the time of the recording of Led Zeppelin,” Page said in a statement. “It is a selection of work in progress with rough mixes, backing tracks, alternate versions and new material recorded at the time.”

The deluxe edition of the group’s 1969 debut, Led Zeppelin, will feature a concert recording of the group’s October 10th, 1969, gig at the Olympia in Paris. The nine-song set list included seven cuts from the album, along with two songs the band would put out on Led Zeppelin II later that month, “Heartbreaker” and “Moby Dick.” The group performed a 15-minute version of “Dazed and Confused” at that concert. 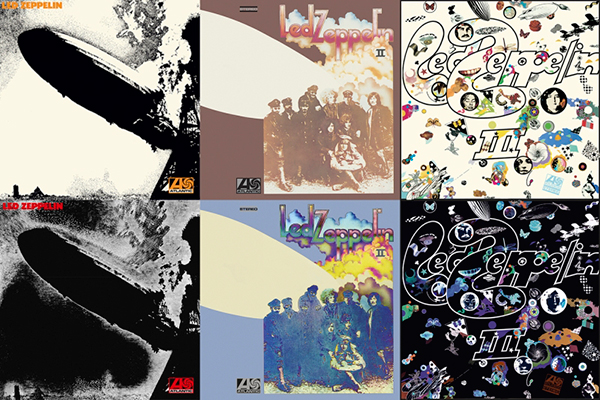 Led Zeppelin wrote much of their second record while on the road, and they put it out nine months after the release of their debut. The bonus disc for the deluxe edition of Led Zeppelin II includes alternate mixes of five songs that made it onto the album, one that didn’t (the previously unreleased “La La”) and the backing tracks for “Thank You” and “Living Loving Maid (She’s Just a Woman)”.

Almost exactly one year after the release of their second album, the band released Led Zeppelin III, with the record’s deluxe edition featuring seven studio outtakes of album tracks alongside three never-before-released tracks: an instrumental precursor to “Bron-Y-Aur Stomp” called “Jennings Farm Blues,” an instrumental version of “Out on the Tiles” dubbed “Bathroom Sound” and the blues medley “Key to the Highway/Trouble in Mind.”

Page first announced that he had been working on the reissues in November 2012. He told Rolling Stone at the time that, in addition to treating his fans to new “sonic and visual thrills,” his goal with the reissues was to make them sound better. “The catalog was last remastered 20 years ago,” he said. “That’s a long time. Everything is being transferred from analog to a higher-resolution digital format. That’s one of the problems with the Zeppelin stuff. It sounds ridiculous on MP3. You can’t hear what’s there properly.”

Late last year, frontman Robert Plant told the BBC that he had discovered some tapes that featured, among other things, some contributions by another vocalist: bassist John Paul Jones. “So far, he’s going to give me two cars and a greenhouse not to get ’em on the album,” he said with a laugh. “Oh, John . . . you can’t wait to hear yourself singing all over the world.” He did not say which recordings feature Jones’ vocals.

Last month, Page announced via his website that the reissues would come out this year. In addition to the Led Zeppelin albums, Page also said that he would be releasing “some of my own material from the archives,” but has yet to detail those releases.

Here are the track lists for each of the bonus discs available in the deluxe editions of the albums:

All tracks recorded live at the Olympia in Paris on October 10, 1969