Less than a year after reissuing their first three albums as deluxe sets, Led Zeppelin plan on putting out two more in the fall. On October 28th, the group will release deluxe editions of its 1971 album, Led Zeppelin IV, and its next record, 1973’s Houses of the Holy.

Like the previous deluxe reissues, each album will include the original LP, newly remastered by guitarist and producer Jimmy Page, alongside a second disc of previously unreleased audio culled from the band members’ vaults. Additionally, each release will also be available as a single album, a single vinyl LP, a deluxe double-LP, digital download and a super deluxe box set, the latter of which features the CDs, LPs, a download card, an 80-page hardbound book with previously unseen photos and memorabilia and a high-quality print of the album cover.

The group’s fourth album has become one of the best-selling albums in history since its 1971 release. Home to AOR staples like “Stairway to Heaven,” “Rock & Roll,” “Black Dog” and “When the Levee Breaks,” the album, which is technically untitled, has been certified 23-times platinum. The deluxe edition contains previously unreleased versions of each of the album’s eight tracks. Included are alternate mixes of “Rock & Roll,” “Misty Mountain Hop” and “Four Sticks,” a mandolin/guitar mix of “The Battle of Evermore” and a markedly different version of “Stairway to Heaven” that the group recorded at Los Angeles’ Sunset Sound Studio. 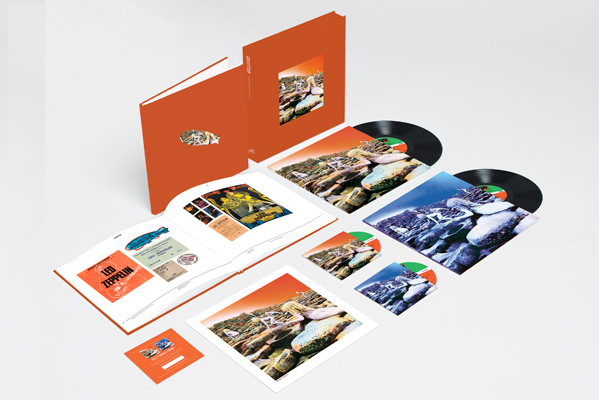 Although the group worked together on assembling these reissues, its surviving members have no intention of touring together anytime soon. In May, Robert Plant told Rolling Stone that he wished to leave things off with the group’s 2007 one-off at London’s O2 Arena. “A tour would have been an absolute menagerie of vested interests and the very essence of everything that’s shitty about big-time stadium rock,” he said. “We were surrounded by a circus of people that would have had our souls on the fire. I’m not part of a jukebox!”

Page said he was “fed up” with Plant’s comments in a June interview with The National, but ultimately took the high road. “We have a great history together and like all brothers, we have these moments where we don’t speak on the same page but that’s life,” he said.

Here are the track listings for the deluxe editions’ companion audio discs (the songs remain the same on the original LPs):

Houses of the Holy (Companion Audio)