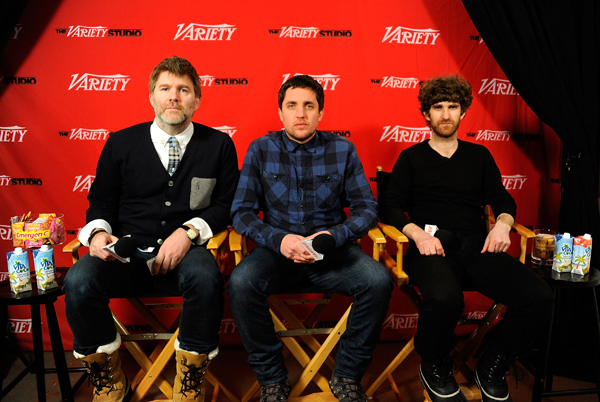 Before making James Murphy the centerpiece of their latest film, directors Dylan Southern and Will Lovelace had never met the LCD Soundsystem frontman. The filmmakers were fans of the band, but it was the timing and casual nature by which Murphy brought LCD to a close that captivated their attention. “Why would you do that?” Lovelace recalls thinking to himself about Murphy’s decision to break up the group, arguably at the height of their popularity.

That lingering question of “why” lies at the heart of the two U.K. filmmakers’ new documentary, Shut Up and Play the Hits. The film, which premiered this past weekend at Utah’s Sundance Film Festival, provides a behind-the-scenes look at the final days of LCD Soundsystem – and Murphy’s subsequent emotions – and includes pristine, never-before-seen footage of the band’s massive bow-out concert last April at Madison Square Garden.

Shortly after wrapping up their first co-directorial effort, 2010’s No Distance Left to Run, a film that follows Britpop vets Blur throughout their 2009 reunion tour, Southern and Lovelace learned of Murphy’s plan to retire LCD Soundsystem. While both men knew they wanted to work with the LCD frontman, making a film was just one of many ideas they would eventually run by the Brooklyn-based singer. “We were just having really open discussions,” Southern says. “There was no firm plan of ‘Oh, we’re gonna make this film or that film.’ It happened organically as we got to know James a bit better.”

Ultimately, it was agreed upon that the filmmakers would shadow Murphy during, leading up to and after LCD’s final concert. For grieving fans, the emotional apex of the film is undoubtedly its visual chronicle of the band’s spectacular final gig – including tear-jerking renditions of LCD staples “All My Friends” and “Losing My Edge.” But the directors were also equally invested in capturing Murphy’s every-man persona: As such, the film bounces between MSG concert footage and shots of the singer – an extrovert onstage – performing menial tasks the morning after disbanding his most widely-adored creation. The camera follows Murphy as he makes coffee, sends email and walks his Boston terrier Petunia. For Southern, this contrast was deliberate: he hoped to juxtapose Murphy “the guy on stage” with the man who enjoys life’s “small moments.”

To shoot the film, and more specifically, the concert footage, Southern and Lovelace employed old-school filmmaking tactics:  they didn’t use a live-feed or monitors. The directors couldn’t see what each camera was capturing as the band performed at MSG. Southern says this retro approach helped the film accomplish a deliberately “in-the-moment” aura.

Leading up to the film’s premiere, many LCD fans have been wondering what the future holds for Murphy, and whether one even exists for his old band. In interviews last week at Sundance, Murphy was vague: he said he already misses his band, but doesn’t “regret” calling it quits, and in another chat, he explained that he’s still writing music  – often a song a day – but that it generally disappears shortly after being created.

Both Southern and Lovelace agree that while shooting their film Murphy appeared content with his decision to end LCD Soundsystem (“At [the time of filming] he had decided it was the right thing to do,” Lovelace says). But they also hope that fans will come to their own conclusions. “The film is about making the audience contemplate rather than telling them how [Murphy] feels,” Southern says. But he’s quick to provide words of caution. “It might make people question whether [ending LCD Soundsystem] was the right decision.”