Laura Jane Grace on New Devouring Mothers LP, the Future of Against Me - Rolling Stone
×
×

When Laura Jane Grace realized that her next musical project was going to involve a new band, she had a revelation.

“It felt really relieving to be like, ‘OK, this isn’t an Against Me! record, so I can say whatever the fuck I want!’” says Grace, whose upcoming album — Bought to Rot, her first LP with new outfit the Devouring Mothers — comes out November 9th. The record marks the debut of Grace’s new trio, which includes Against Me! drummer Atom Willard and engineer/mixer Marc Jacob Hudson.

'In My Room' With Laura Jane Grace

Recorded at Hudson’s studio in rural Michigan, Bought to Rot contains a range of songs, from the tongue-in-cheek folk-rock post-divorce anthem “I Hate Chicago” to the Lemonheads-influenced “Apocalypse Now (& Later)” to the slow-burning rocker “Valeria Golino,” which Grace describes as her current “mission statement.”

“My approach musically to the record was that I wanted it to feel like a mixtape,” says Grace, 37. “Like OK, you’ve got this Nirvana-like song, you’ve got a Cure song. It was musically freeing, in that way, to just be playing whatever was coming to me as I was writing and not having to think about it.”

Bought to Rot, which will be released by the esteemed alt-country Chicago label Bloodshot Records, was written in spurts in Australia, Spain and in Grace’s hometown of Chicago during the past couple years.

Rolling Stone recently caught up with Grace to discuss the new album, why she almost broke up Against Me! and why she’s now optimistic about that band’s future.

How does Bought to Rot feel different from your last few Against Me! albums?
That’s a complicated question. Coming off of touring last year, Against Me! did a two-month long run tour, and I was kind of at a point where I was going to break up the band. I was just going to end it. I had kind of thought that the Fest in Gainesville was going to be the last Against Me! show. We did Reinventing Axl Rose in full, and I was like, “OK, maybe this is the point to end it, you know?” But then, we didn’t. I was ready to end it, but then I put the band on mental hold but kept working on songs.

Were those the songs that ended up becoming Bought to Rot?
Me and Atom and Marc Hudson, we’ve been playing together and getting together every two or three weeks, either in Chicago or Michigan. I was writing songs under the assumption that I’m working on an Against Me! record and that we’d figure it out when we figured it out as far as what was going on in the band. But then it got to a point where it felt really dishonest to just have [bassist] Andrew [Seward] jump in and go, “Oh, these are Against Me songs” when it was me and Marc and Atom that came up with them. It felt wrong to just plug that in all of a sudden, like, “This is Against Me!” I didn’t want that. If we were doing another Against Me! record, I wanted it to be like, “OK, the four of us are going to get together, and we’re going to do this.”

These were songs that were different, and me and Marc and Atom really enjoyed playing together in a different way. I can’t give any details away, but at this point we’ve recorded two records. We recorded a record a year ago and just sat on it. It was like the practice run where we realized this works really well. Like, “We can do this. We can record like this, so let’s see where this goes.” And it kept snowballing like that. This album was written in this weird limbo period. I don’t know, it’s complicated. I have some surgeries coming up in December that I’m terrified about. I’m thrilled about it, really exhilarated, but also really terrified by them. So I have this looming date ahead of me that gave me this urgency of feeling that I’ve got these songs and I just want to put them out. Because I feel like if I don’t, they’re going to go bad or I’m going to have to sit on them for another fucking year.

How did you go about figuring out how to release an album on your own?
Last year, when it was uncertain what we were going to do with Against Me!, I started talking to record labels to figure out what the options are. Every label I talked to, I said that I want to do an Against Me! record but I really want to do a solo record first. I could tell that everyone I talked to was placating me, or not actually excited by the idea. I felt like there were all these people telling me not to do this record, that it would be bad for my career, or make it seem like the band had split. For a while I was like, “OK, yeah, sure.” But at the same time I was thinking in the back of my mind, “Fuck all of you. I’m going to do this anyway, because it’s what I want to do.”

Was there anything about this new batch of songs, either lyrically or musically, that convinced you it needed to be a solo album versus a band record?
Yeah, sure. I don’t feel this as much now, but at the time, I felt this pressure where I didn’t know, or don’t know, what Against Me! is supposed to be. Coming out of doing a book and doing Transgender Dysphoria Blues and Shape Shift With Me, I didn’t know if people were expecting for this to be political or expecting me to only sing about trans issues, but, like, that’s not what I’m writing about. I’m just writing because I really love writing songs and I really love playing music and I wasn’t trying to think about things like that. That pressure feels really unhealthy to me. It felt like I needed to break free of, “OK, here’s another Against Me! record.” It was suffocating. 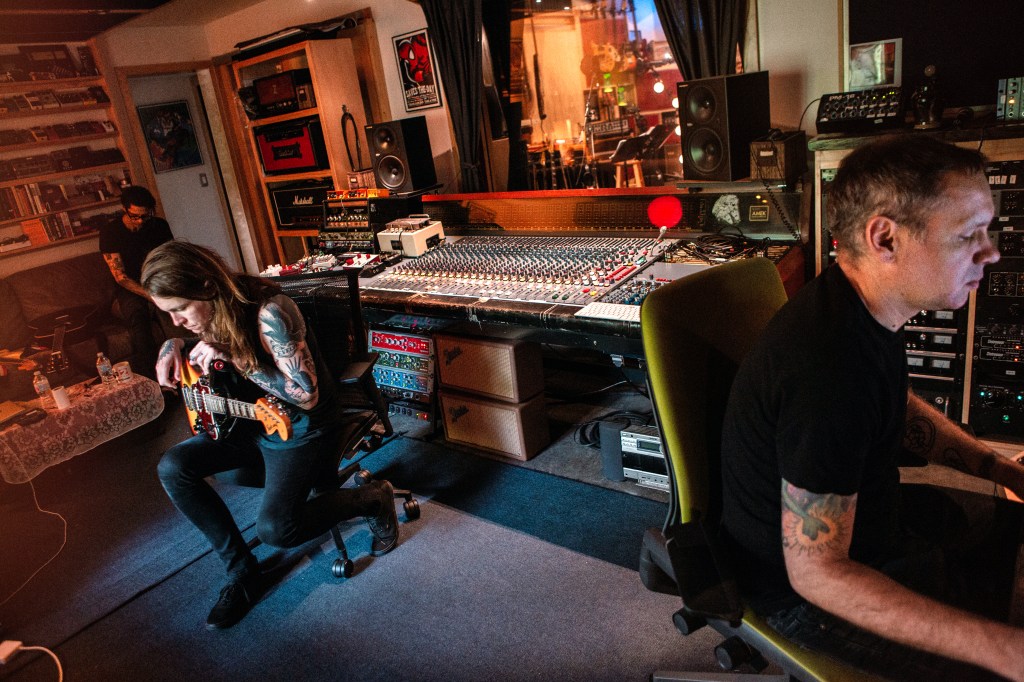 This feels like something tons of singer-songwriters in bands go through, when the music they’re making at a given moment doesn’t match with that band’s reputation or image. What a band is known for and what the lead songwriter wants to communicate can’t always match up, right?
Totally. It’s almost like if you’re going to look at Against Me! as a TV show, we’re going into our eighth season. If you’re writing a TV show, you’re conscious of the past seasons and the story lines in the past seasons, so there’s this pressure of, “How do I keep this story line going?” But that’s not actually natural and that’s not actually the way life works or the way art works. So it’s stifling. To be able to say, “Whatever, new TV show. I don’t fucking care. These are songs. They’re good songs in their own right. Let them be judged like that.” I just really needed that.

Do you feel like you realized you wanted to tell a different type of story right now, for yourself — or for your fans?
If anything, there was more of a thought of like, after Shape Shift With Me, of being like, I don’t want to write about these same things anymore. I need some new sources of inspiration. And I don’t want to be negative. I want to write some positive, happy songs, and I wanted that to be inspired by positive, happy living, too.

Ten years ago, you made your first ever solo EP, Heart Burns.
When I realized that, I was like, “Huh, do I get bit by a bug every 10 years, where I’ve got to do this thing?” Because that was similar then, when I was of being really bullheaded and focused on doing my own record. Heart Burns was 10 years ago, and then 10 years before that was when I started Against Me!, so I really do think it’s a 10-year itch, where I get to do something that pushes me out of my comfort zone and is different and rethinks things.

Did your debut solo EP help refocus you in Against Me! at the time?
No, it didn’t. I’m hoping this has a different effect. But it’s hard to separate what feeling that gave me versus what was going on in Against Me! at that time. We were in really dark times then. Being 10 years younger, also, that caused problems in the band. People were weird about me doing a record like that. And now, 10 years later, I feel like everyone is mature enough to get it where it’s like, it doesn’t mean I’m quitting Against Me! and don’t want to do it. I just need to do this thing.

Has making this album helped you to you feel like you’re in a more stable place with Against Me! than you were a few years ago?
It feels like there’s a blank slate, and we can do whatever we want with it right now. What we do with it, I don’t know. But it does feel like that: “OK, here we are. Let’s see what we can do.”