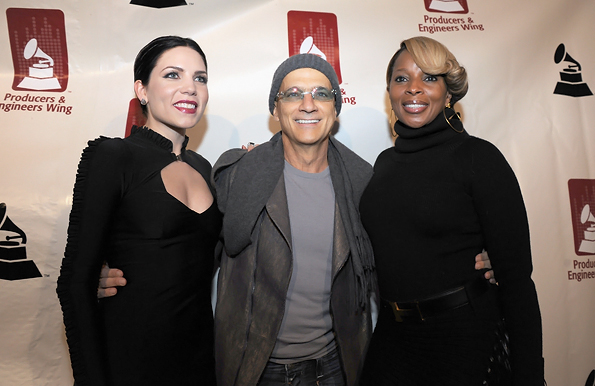 After an impressive video tribute looking back on a career that has seen him work with John Lennon, Bruce Springsteen, Dr. Dre, Eminem and Lady Gaga, to name a few, Jimmy Iovine joked, “Oh, that thing gives me a headache.”

The producer and executive was honored at L.A.’s Village Studios last night by the Grammy Awards’ Producers & Engineers Wing. During a witty speech, Iovine said he initially had doubts about accepting the honor. But later, in a private green-room reception, he told Rolling Stone why he decided to be the honoree. “I feel the most comfortable around record producers,” he said. “How I work in music now is through other people, and it’s never failed me. That’s why this thing was important to me.”

Those “other people” came out in droves to support him, including will.i.am, Dr. Dre and Stevie Nicks. “Jimmy is not afraid to say what he likes and doesn’t like,” said Mary J. Blige on the red carpet. “He’s not afraid to be honest. He is a musician himself.” In his speech, Iovine spoke often about his close relationship with Dre, saying, “Wherever I am right now, I would not be here without having met him.”

The latter has, of course, been the focus of much scrutiny lately. It’s a difficult microscope for any artist to find themselves under, but in a room filled with some of the biggest stars in music, industry heavyweights and the media, Del Rey delivered a stellar performance of her hit “Video Games.”

Iovine had heavy praise for the singer, repeatedly referring to her Born To Die debut as a full album from start to finish and telling the crowd the label was fully committed to her. For Iovine, showcasing some of Interscope’s new talent – both of whom he predicted would be back at the Grammys next year – was a fitting way to celebrate. Everyone else wanted to keep the spotlight on him.