Lady Gaga Delivered a SXSW Speech in Which She Talked 'Artpop,' Her 'ArtRave' Tour, a Possible New Album, a New Video and More - Rolling Stone
×
×

The dichotomy between art and commerce was the major theme of Lady Gaga‘s South by Southwest keynote address Friday. Whether she was addressing questions about “selling out” by allowing a snack company to sponsor her performance-art concert Thursday night – and deflecting those questions with a call for artists to “sell in,” while beating her hand against her heart – or decrying the amount of expectations placed on her versus other artists when it came to her most recent album, Artpop, she called for the music industry to restore “power” to artists and take it away from corporations.

The singer, dressed elaborately in a plastic tarp and cream gown to match her faux-dreadlocks, told moderator John Norris that she would feel perfectly okay with herself were she to drop out of the public eye and focus on making music for herself and friends in clubs and bars. But to make her case, she had to find a way to explain why allowing snack company Doritos to sponsor her appearance at the festival was an artistic decision.

Throughout her speech, she punctuated some of her points with the phrase “artpop,” and the above was no exception. But she returned to the idea of making art and being a creator several times throughout the hour-long discussion. Her performance the previous night, in which British performance artist Millie Brown vomited a Technicolor palate of colors on her and humped her onstage, was art, she said, and therefore worth it. 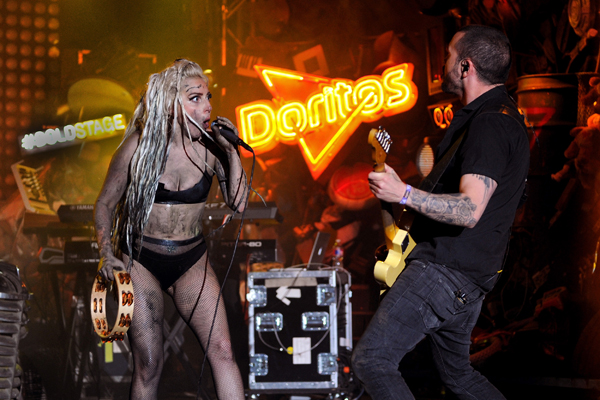 Speaking to the effect it had online, she said, “It was just exciting seeing people talking about performance art on the Internet and debating about whether it’s art or not. We really just did it because we believe in the performance and we believe in what it meant to the song [‘Swine’].” Regarding her artistic vision and collaborating with Brown, Gaga said, “I am so deeply passionate about any person that has an artistic spirit, any person that has a talent that they believe in no matter how crazy the idea is. You never know where that crazy idea might lead you. Martin Luther King believed that he could start a revolution without violence. Andy Warhol believed he could turn a soup can into art. Sometimes things that are really strange can save the world.

“I’m not saying vomit is going to change the world,” she continued, adding that it was “about us really respecting each other artists.” Then, again, she said, “Artpop.”

As for working with corporate sponsor Doritos, Gaga said that the snack maker fully supported her artistic vision and did not give her any terms as to what she could or could not do onstage. Moreover, she said the CEO of the company came backstage and was crying telling her how brilliant the show was, as she was covered in paint and vomit. “To whoever is writing or saying [negative things about the relationship], you don’t know fuck about the state of the music industry,” Gaga said.

Money, the singer said, was one of the reasons why she was so depressed in the year leading up to Artpop’s release. With success, she said, comes expectations. “I will stop,” she said. “I will quit. I will retire from the commercial market if I have to do something other than be myself,” she said. The Fame Monster artist also said that she would be happy making music downtown without the pressures of success. “I don’t need all of that if it means negativity,” she said.

When Norris asked her to speak to the myriad maladies that seemed to accompany Artpop – severing ties with her manager, facing a lawsuit, squaring off with Katy Perry on the charts – she demurred. “I’m sorry if I didn’t sell a million records the first week,” she said. “I have before. I’ve sold 27 million albums. I’m very proud of what we did. I sold as much as everybody else sells. I’m held to such an insane standard. It’s almost like everybody forgets — which is kind of a compliment — but everybody forgets where the music business is now.”

As for her place in the pop music industry, she separated herself from her peers. “I don’t know fuck all what I have to do with Katy Perry,” she said. My music is so different and I couldn’t really be more different really. I don’t really fit in pop music in a way, but I came in through it and I’d like to think that I’ve changed it in some way so that you don’t have to feel like you have to fit into a mold. I didn’t have to fit into a mold.”

She said that making Artpop got her through her hardest times and that it “healed her every single night.” But she said, most of all, it was the pressure to perform that got her down in recent months. “The sad part is, at some point, you have to look at those people who believe in you and say, ‘My talent matters more to me than the money does,'” she said. “And what I have to say matters more to me than the money does. I know that it’s fun being on top and I know it’s fun having everybody wish that they were Number One, but having people envy you really isn’t fun at all.”

But, to her, fitting in was a larger thing. She said that it was difficult being a woman in pop because eventually people stopped taking her seriously as a musician, producer, songwriter and performance artist. “I think that’s the thing that poisoned me from 2013 to 2014, or 2012,” she said. “[Hearing] ‘We just want you to look beautiful’ over and over and over again in my head until I just wanted to look ugly all the time, because I’m rebellious. . . . It really crushed me. Like, I’ve won Grammys now. I’ve written albums. I’ve toured the world four times. You’re telling me to look beautiful? It’s all back to tits and ass? That’s so sad.” 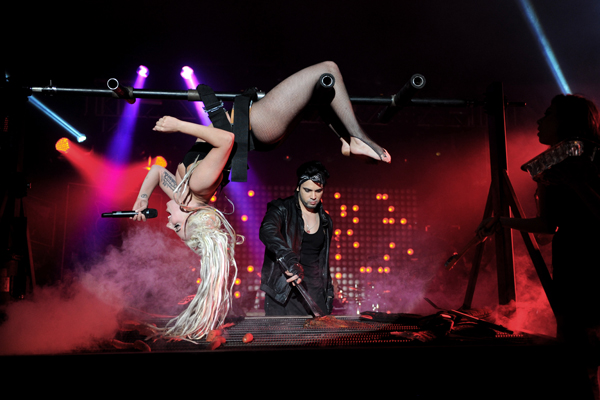 Despite hearing this, she charged forward and emerged with enough music for what she jokingly referred to as “Act 2” of Artpop – not that her fans will hear it anytime soon. “There are many volumes of work over a long period of time that have not been released to the public, because I’ve chosen not to put them into the system,” she said. “Sometimes it’s just fun to have records that me and my friends listen to. We love it and we don’t care what anybody else thinks. Maybe someday we’ll release them. And yes, I have a whole second act of Artpop.”

What her fans will get soon, however, is a new video on Saturday, March 22. She would not disclose which song it would be for, but she did say that they shot it at Hearst Castle and that it was a “different type of video” for her, and likened its spirit to her SXSW performance. “There’s a deeply creative rebellious spirit in Artpop,” she said. “Kind of wrapping into what we were talking about with Millie and the ‘Swine’ performance yesterday. . . Really, it’s about freeing yourself from the expectations of the music industry and the expectations of the status quo.”

She also hinted – and only hinted – at what her fans could expect from her upcoming ArtRave tour. It will not be studded with art by Artpop cover artist Jeff Koons or nods to her performance artist friend Marina Abramović. Instead, it will be “celebrating all the albums, celebrating the new one.” The singer has custom-built a stage for the tour, which she will reveal to her fans next week.

“I want to do not the same type of show that I did in Austin,” Gaga said. “But [I want] that same sort of atmosphere that’s fully passionate, creative rebellious fun where you can be yourselves and then take it home with you.”