“Why is there a football game before the Lady Gaga show?”

A friend of the singer poses this question near the end of the new Netflix documentary Gaga: Five Foot Two, just as Lady Gaga finishes the nail-bitingly intense preparations for her Super Bowl performance. It’s one of many up-close-and-personal scenes in the film, which captures the singer returning to pop’s upper echelons with last year’s Joanne album and this year’s triumphant Super Bowl concert.

Little is left uncovered, as the camera follows Lady Gaga to a family baptism, watches her dwell on loneliness amid a world of fans and tracks her every grimace as she attempts to recover from an old hip injury that just won’t go away. Here are eight things we learned from Gaga: Five Foot Two.

1. Lady Gaga has a new perspective on relationships.
“My threshold for bullshit with men is… I don’t have one anymore,” Lady Gaga declares in the opening minutes of her new film. “I just don’t care. Maybe cause I’m 30 and I feel better than ever, you know? All my insecurities are gone, I don’t feel insecure about who am I as a woman. I’m not embarrassed or ashamed of what I have.”

This new attitude extends to her professional life and her decision to work with producer Mark Ronson on Joanne. “There’s so many men in my life in business… [who made me] feel like what I was on my own wasn’t good enough. I don’t feel that way working with Mark.”

2. She feels slighted by Madonna.
For as long as Lady Gaga has been a star, she’s been dogged by comparisons to Madonna. She addresses those in Gaga: Five Foot Two at length. “The thing with me and Madonna, for example, is: I admired her always. And I still admire her, no matter what she might think of me.”

But that admiration now comes with a caveat. “I’m Italian and from New York,” Lady Gaga continues, “so if I got a problem with somebody, I’m gonna tell you to your face. But no matter how much respect I have for [Madonna] as a performer, I could never wrap my head around the fact that she wouldn’t look me in the eye and tell me that I was reductive… I saw it on fucking TV. Telling me that you think I’m a piece of shit through the media, it’s like a guy passing me a note through his friend: ‘my buddy thinks you’re hot.’ Fuck you. Where’s your buddy fucking throwing me up against the wall and kissing me? I just want Madonna to throw me up against the wall and kiss me and tell me I’m a piece of shit.”

Later, while visiting her grandmother, Lady Gaga can’t resist taking one more shot at the women she admires. While looking at an old high school picture, the singer’s father remarks, “this proves that she had braces.” “If I had kept that gap,” Lady Gaga adds, “then I would have even more problems with Madonna.”

3. She’s been battling debilitating pain for years.
Throughout Gaga: Five Foot Two, the singer is fighting pain that stems from a broken hip suffered on the Born This Way Tour in 2013. The day she is due to perform at Tony Bennett’s 90th birthday party, Gaga is laid up on the couch in tears. “The whole right side of my body is in a spasm,” she tells a caretaker. “My fucking face hurts.” “Let’s put Trump on,” she adds later. “That’ll knock me out.”

But that’s only a temporary solution, as she visits a doctor for something more thorough. “I have chased this pain for five years,” she explains. “When I feel the adrenaline from my fans, I can fucking go. But it’s not like I’m not in pain.” The scene culminates with Lady Gaga listing off a series of drugs she’s taking to help cope before submitting to immediate medical treatment. Even face down on a doctor’s table with needles protruding from her back, Lady Gaga remains focused on work, complaining about the leak of Joanne earlier that day.

Despite the latest medical intervention, the pain still troubles her, and Lady Gaga postponed the European leg of her Joanne World Tour on Monday.

4. Sexism among male producers, and the industry on the whole, dogged her throughout her career.
Lady Gaga suggests that high-level male producers regularly abuse their power when working with female artists. “When producers — unlike Mark — start to act like, ‘you’d be nothing without me,’ for women especially, since those men have so much power, they can have women in a way that no other men can,” the singer explains. “And then I walk in the room, and it’s like eight times out of 10, I’m put in that category, and they expect from me what those girls have to offer, when that’s just not at all what I have to offer. That’s not what I’m here for.”

“The methodology that I used to get out of that category was when they wanted me to be sexy or they wanted me to be pop I always put some fucking absurd spin on it that made me feel like I was still in control,” she continues. “If I’m gonna be sexy at the VMAs singing about the paparazzi I’m gonna do it while cleaning the bathroom and reminding you of what fame did to Marilyn Monroe.”

5. Lady Gaga dug into the family archives to help shape Joanne.
Lady Gaga named Joanne after her aunt, Joanne Stefani Germanotta, who died due to complications from lupus at 19 years old. During one of the most emotional scenes in Gaga: Five Foot Two, the singer visits her grandmother to play her the album’s title track. “We’ll just play it, and if we get upset, we don’t have to talk about it,” Lady Gaga says. But grandma endorses the track: “That’s a beautiful piece.”

In addition to getting grandma’s stamp of approval, Lady Gaga reads Joanne’s old poems and looks at some of her artwork. “She had a lot of talent, but she didn’t have enough time,” her grandmother says. “For the 19 years we had her, she was precious. And she’s not been forgotten ever.” 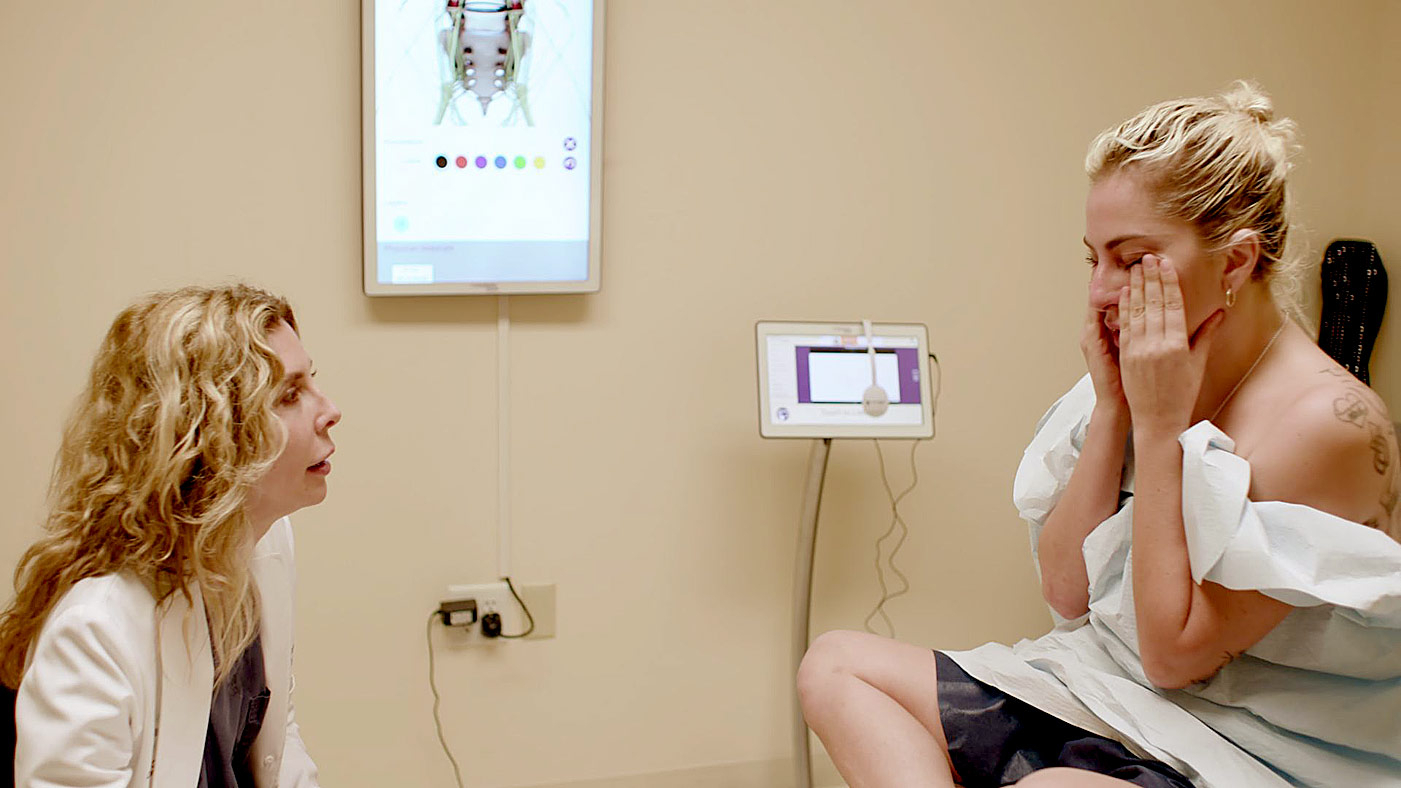 6. She believes in confounding her audience.
Lady Gaga shows little interest in catering to listener expectations. “I want to do the opposite of what everyone thinks I’m going to do,” she declares in a meeting with Super Bowl halftime show-runners. “Everyone thinks I’m going to come out there on a fucking throne in a meat dress with 90 shirtless men and unicorns. Am I right? And then at the end I’m gonna do something shocking that’s gonna freak everybody out. But it’s not even in the neighborhood of what we’re gonna do.”

She expresses a similar sentiment in a conversation with her creative team where she decides to eschew the elaborate outfits that characterized her early promotion cycles in favor of a simple jeans and T-shirt outfit. “Honestly we’ve seen me fucking glamorous for 10 years,” she says. “It’s fucking boring.”

7. She’s a stickler for details.
Whether it’s adding more emphasis to the high end during the mixing of Joanne or nailing her cameo on American Horror Story, Gaga: Five Foot Two captures the singer’s rigorous eye for the smallest detail. During one of many intense scenes of preparation for her Super Bowl performance, she suggests this is a necessity for any star at her level. “If I pick up the keytar and play the wrong note in front of 100 million people, that’s my fault,” she says. “It doesn’t matter that someone else screwed it up. It’s my name.”

As a result, she’s always thinking several steps ahead. Moments later, Lady Gaga demands that a wardrobe assistant change her jacket lining. “I know to other people it’s just the lining of a jacket,” she explains. “But for me, it’s the way that the fabric on my outfit interacts with this fabric is going to change the speed of my arm as it enters the sleeve.”

8. After years of insecurity, Lady Gaga now recognizes the extent of her talents.
It may surprise some to hear that Lady Gaga’s whirlwind of success did little to quiet her self-doubts — until now. “I never felt comfortable enough to sing or wear my hair back,” she says. “I never felt pretty enough or smart enough or a good enough musician. That’s the good part: I didn’t feel good enough, and I do now. Of all the things I deserve, that’s where I know I’m worth something.”